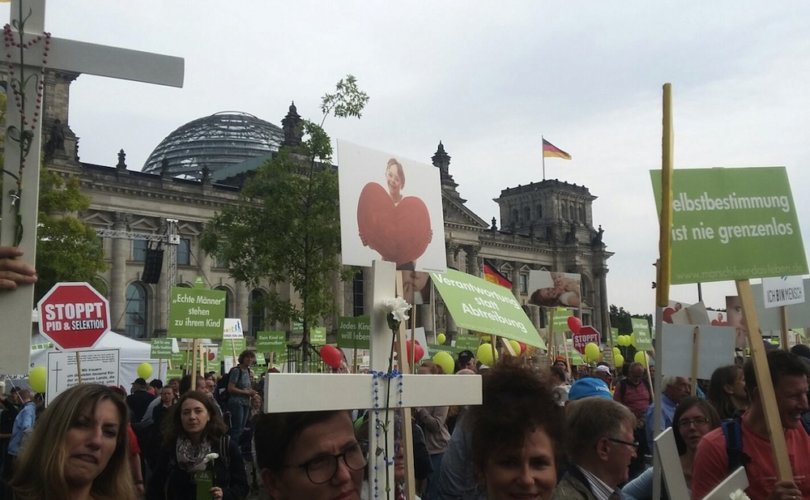 BERLIN, Germany, September 19, 2016 (LifeSiteNews) — More than 7,500 people gathered Saturday on the streets of Germany’s capital to march in silence in the defense of the value of human life.

“The 12th March for Life in Berlin was a fantastic success and an impressive testimony for life!” said Martin Lohmann, chairman of the “Bundesverband Lebensrechte” (Federal Association for the Rights to Life). “I thank the more than 7,500 participants from all over Germany and the five bishops who walked with us, as well as the countless helpers and the police who protected us so well.”

The 12th March for Life ran along the central streets of Berlin from the Reichstag building to the Hedwigskathedrale (St. Hedwig’s Cathedral), which welcomed all participants for an ecumenical prayer service.

Five German bishops walked in the front line: Berlin Archbishop Heiner Koch, Regensburg Bishop Rudolf Voderholzer, and auxiliary bishops Matthias Heinrich of Berlin, Dominikus Schwaderlapp of Cologne, and Florian Wörner of Augsburg. A few days before the event, the president of the German Bishops’ Conference, Cardinal Reinhard Marx, sent out a press statement in support of the pro-lifers and participants. The bishops walked united with many pro-lifers under one banner in silence to support the motto: “Every human has equal dignity – no child is unbearable.”

The March was organized by the BVL, uniting 13 pro-life groups in Germany. It is the continuation and succession of the so-called “1,000 crosses march,” a silent protest in which people carry 1,000 white crosses in remembrance of 1,000 children aborted every day in Germany.

Instead of crosses, participants tied white carnations to the barriers that hemmed the route of the demonstration. The march has taken place annually since 2008, with progressively growing numbers of participants. With more than 7,500 this year, the march had a greater turnout than ever before.

Protestants in Germany are divided on the issue. While the bishop of Stuttgart sent a greeting to the March, the Protestant church of Berlin-Brandenburg-schlesische Oberlausitz dissuaded her members from participation.

Participants in the March did not reduce their message to the repudiation of abortions but also expressed a positive stance toward the value of human life. During a testimony session at the beginning of the March, a young woman with Down syndrome talked about her own life: “Life is something very valuable. That is true for me and for all other human beings.” She shared stories about her private life, her hobbies, her work, and her friends. A mother of five gave a gripping testimony of how she learned that the child she was carrying would live for only moments after birth and why she decided to bring him into this world regardless. Other women described their abortions as traumatizing experiences.

As has been the case every year, Berlin’s police had their hands full. About 1,700 left-wing extremists united under an action group called “What the f***?” tried violently and determinedly to disturb the March. After only hundreds of meters of walking, extremist feminists shouted blasphemous slogans and tried to interrupt the participants with drums and loud music. “No God, no state, no patriarchate,” was one of the milder slogans the pro-lifers had to endure. One of the extremists managed to jump the barricades and spat in the face of Beatrix von Storch, who was walking in the first row of the March. She is a minister in the AfD, a conservative party in Germany.

Unlike last year, no barricades of seated demonstrators could be formed by the counter-rallies because the police closed all side streets with access to the main route.

The participants were unfazed by these disruptions. They marched with senior citizens and children in silence in support for life. “You are taking the side of those who – according to some – have no right to live because their life is worthless or unwanted for some reason. You are being strong for those who are not supposed to live because they have no function and only seem to be a burden. With your participation, you are solidifying the pillars of a humane future for our country!” Bishop Voderholzer told the marchers.

“Let us be patient. Let us remain peaceful. Let us invite a ‘Yes’ to life. That is the meaning of this march. It is legitimate, democratic, philanthropic, and right. That is why we are here” were the concluding words of a speech by Lohmann.