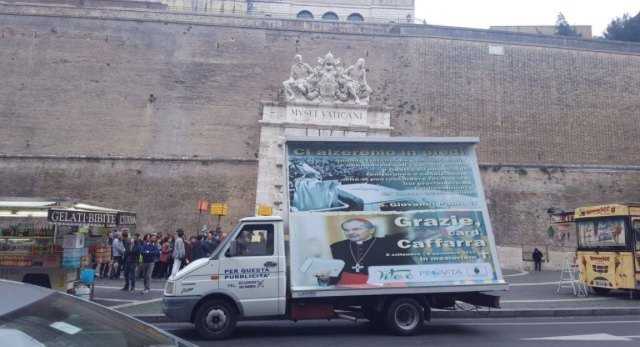 According to the organizers, a police officer said Cardinal Caffarra “wasn’t in line with Pope Francis.”

ROME, November 6, 2017 (LifeSiteNews) — Today in Rome, a publicity truck carrying billboard-size images of Cardinal Carlo Caffarra, the dubia Cardinal who passed away two months ago, and Pope John Paul II made its way through the streets of Rome before being stopped by police for two hours of questioning near St. Peter’s Square.

The “campaign to remember Cardinal Carlo Caffarra” was organized by the Italian pro-life and pro-family groups, Vita è [Life is], ProVita Onlus [Pro-Life non-profit], and Fede&Cultura [Faith and Culture]. According to reports, after being stopped on the Via della Conciliazione (the central road leading to St. Peter’s) this afternoon, the organizers were ordered to report to a local police station for further questioning tomorrow.

Photos of the “campaign to remember Cardinal Carlo Caffarra” publicity truck emerged this afternoon on Twitter. A first tweet read: “Police in Rome stop truck in honor of Cardinal #Caffarra because 'he isn’t in line with the Pope.'”

A second tweet followed: “Organizers of the initiative expected tomorrow at the police station to explain the reasons for the action… Are we still in a democracy?”

The top billboard (pictured below) features an image of Pope John Paul II greeting a large crowd from the popemobile, with words he delivered during Holy Mass at the Capital Mall in Washington, D.C., on Sunday, October 7, 1979. During that historic visit to the United States, he said: We will stand up: When the institution of marriage is abandoned to human selfishness or reduced to a temporary, conditional arrangement that can easily be terminated, we will affirm the indissolubility of the marriage bond.”​

This evening in Rome, news of how the truck was stopped by police appeared on the ProVita website:

ProVita, Vita è, e Fede e Cultura wanted to pay tribute to the memory of a staunch defender of life and the family like the late Cardinal [Caffarra], by having a publicity truck with the poster travel through the streets of Rome.

On Via della Conciliazione — incredible but true — the publicity truck was stopped by the undercover police as well as those in uniform. A superintendent of the Borgo precinct asked Toni Brandi (the head of ProVita) by telephone what the aim of the initiative was, since to quote: “Cardinal Caffarra wasn’t in line with Pope Francis.”

Brandi responded by saying they were commemorating a holy man, a prince of the Church, not at all a heretic or separated from the reigning Pope.

The truck was stopped for two hours. An interrogation followed that will be continued tomorrow at 12 noon at the police station, where Brandi has to go to explain his reasons for the initiative. The superintendent on duty said he was concerned about public order and would not allow any more photos to be taken.

Here is the incriminating poster: What subversive message does it contain? How does it disturb public order? It is possible that in a civil and democratic country where freedom of expression and thought exists, that one cannot commemorate a holy man who together with the then-reigning Pope, John Paul II, spent his life to defend life from conception, and the family founded on marriage?

Judge for yourselves, dear Readers.

Today, on November 6, 2017 we wish to remember, 2 months after his death, the Cardinal of Bologna, Carlo Caffarra. This faithful servant of Christ and of the Church, he was a close collaborator of John Paul II and Benedict XVI, with whom he shared a deep care for the family, an image of the Trinity willed by God for the good of mankind.

On May 13, 1981, the day when we celebrate the anniversary of the Fatima apparitions (May 13. 1917), and when John Paul II was almost mortally wounded by a gunshot, the Pontifical Institute for Studies on Marriage and Family was created. At the request of the Pope, Cardinal Caffarra was its first president.

Years later, still courageously committed to the defense of life and the family against abortion, artificial insemination, wombs for rent, and every other aberration, Caffarra recalled a letter sent to him by Sr. Lucia of Fatima, in which the visionary said: “The time will come when the decisive battle between the kingdom of Christ and Satan will be over marriage and the family.”

During the last part of his life Caffarra fought, with his wisdom, humility and gentle resolve, for the “sound teaching” of which the Apostle Paul speaks (cf. 2 Tim. 4:3): The “sound doctrine” which alone, together with true charity, will put an end to the deep “division” into which the Catholic world today is heading. For, as Cardinal Caffarra said in his final interview with Il Foglio, “only a blind man can deny that there is great confusion in the Church.”