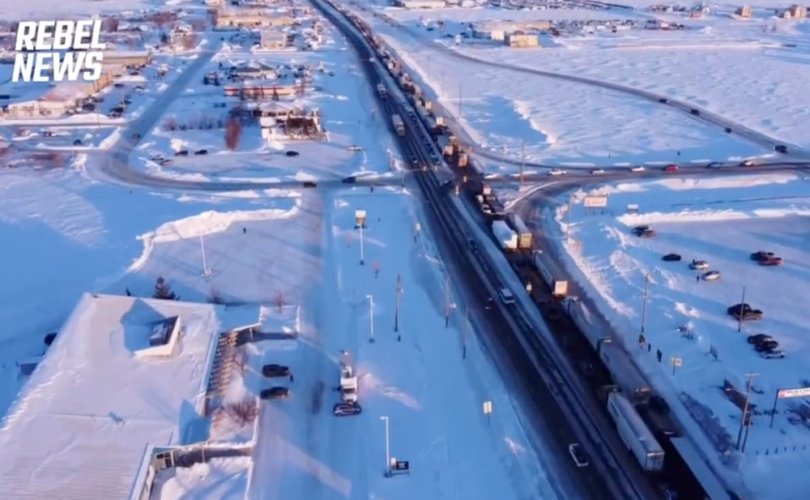 (LifeSiteNews) – The Freedom Convoy has released a list of demands – including removing COVID jab mandates for all Canadians – it says it is hoping will be met by the government of Canadian Prime Minister Justin Trudeau after it arrives in Ottawa this weekend.

According to a Western Standard report, demands from the group to the Trudeau government include terminating “all vaccine passports, including inter-Canada passport systems,” along with eliminating all “mandatory programs of vaccination and contact tracing.”

The group also wants the rights of those who are vaccine-free to be respected, and wants “divisive rhetoric attacking Canadians who disagree with government mandates” to be stopped at once.

Additionally, the group wants an end to censorship of those with opinions contrary to the government.

READ: Humble truck drivers could be the ones who finally liberate Canada from Trudeau’s COVID tyranny

The Freedom Convoy began its “slow roll” to Ottawa this past weekend, and once in Ottawa, many in the convoy plan to stay there until the government of Trudeau meets the group demands to remove all COVID restrictions and mandates.

While the convoy has no official leader as it is a grassroots movement, the “Freedom Convoy 2022” Facebook and GoFundMe group has raised over $5.5 million in under two weeks.

The convoy has gained support from law enforcement, such as Durham Police Constable Erin Howard, along with many Conservative Party of Canada politicians.

Lich noted that if anyone in the convoy sees someone acting outside the law, that person is to be reported to the police at once as he or she is “not part” of the official convoy.

Lich has come under attack from Trudeau’s former advisor and friend Gerald Butts, who said this past weekend that Lich is a “separatist” and questioned what she would do with the “money.”

However, Lich was unfazed by Butts, and sent him an open invitation to meet her to have a coffee when she arrives in Ottawa.

@gmbutts I don’t know what you are afraid of. We are to Ottawa to see you. Come down and have coffee.

Should Gerry come for coffee? #CoffeeWithButts

Chris Barber of Swift Current, Saskatchewan, a trucker driving in the convoy and is also one of the “Freedom Convoy 2022” organizers, said in an online video posted Monday that the group is not “anti-vaccination” but rather “anti-government mandates.”

Video and images on social media show the sheer scale of just how large the Freedom Convoy is.

Some estimates put the convoy at over 100 kilometers in length as it passed through Winnipeg, Manitoba yesterday.

Aerial video posted by Rebel News shows the massive caravan, which might well be the longest in history. making its way into Winnipeg.

Current scene in Winnipeg: Traffic comes to a halt after the nationwide convoy of truckers protesting government’s vaccine mandates arrive.#FreedomConvoy2022

As the caravan entered Winnipeg, thousands of people braved the extreme cold to greet the convoy with many holding signs of support and waving flags of all kinds.

“INSANE: Winnipeg has come out in force! This ain’t Trudeau’s town,” tweeted Keean Bexte from the Counter Signal.

Another video posted by the Shaun Newman Podcast shows just how many vehicles were part of the convoy as it entered Winnipeg.

Look at the support in Manitoba pic.twitter.com/tCJhNT6ChW

Earlier in the day as the convoy was making its way through the province of Saskatchewan, thousands came out to support the truckers, also braving the cold.

An aerial view of the convoy between Whitewood and Moosomin, Saskatchewan gives scope as to what awaits Trudeau and his cabinet this coming weekend.