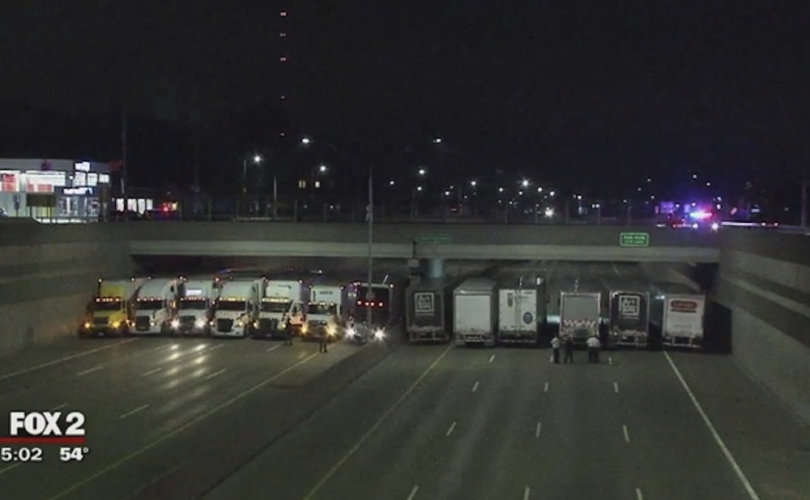 Trucks park under a Detroit freeway overpass to help save a life.Fox2 Detroit screenshot

A photo taken by a Fox 2 Detroit reporter shows the truckers lined up in hopes of breaking the fall as police worked to get the man to safety.

The state police called on truck drivers to line the highway below a Detroit-area overpass after getting the 911 call around 1 a.m. Tuesday.

State police closed the highway in both directions after the emergency call and organized the truckers beneath the Huntington Woods overpass on Interstate 696. Negotiations lasted about three hours as the trucks remained parked, and authorities were able to get the man down and to the hospital for help.

Michigan State Police Lt. Mike Shaw told the Fox affiliate that the method has been used by the MSP for at least 23 years, and it has never been an issue to get truckers to help.

“We know that usually if someone jumps from that height it's usually not going to be a good outcome,” Shaw said. “We will actually steal semi-trucks out of the crowd and as we get the cars off the freeway we will direct the semis to another trooper that's standing underneath the bridge and we will start to line them up right across.”

“They want to help out too,” he added. “Nobody wants to see somebody take their own life, and if it takes parking your truck underneath an overpass for a couple of hours to make sure somebody's is safe, they're more than willing to do something like that.”

Semi truck drivers have been helping with suicides for years, MSP says https://t.co/AEQCWSvSQj

The photo has allowed people to see the work the state police and truckers have been doing for decades to save lives.

This photo does show the work troopers and local officers do to serve the public. But also in that photo is a man struggling with the decision to take his own life. Please remember help is available through the National Suicide Prevention Lifeline at 1-800-273-8255. pic.twitter.com/RBAlCIXT1o

“What we were able to do is kind of rectify that trigger and get him to decide that he was better off living than dying,” Shaw said.

“We have been doing this for as long as I have been in the department, which is 1995,” he said. “We have kept it quiet for that long, but social media and cell phones kind of changes that.”

Shaw emphasized that there is help out there for individuals considering suicide, a thought the state police also shared shared on Twitter after the incident, stressing that “in that photo is a man struggling with the decision to take his own life.”