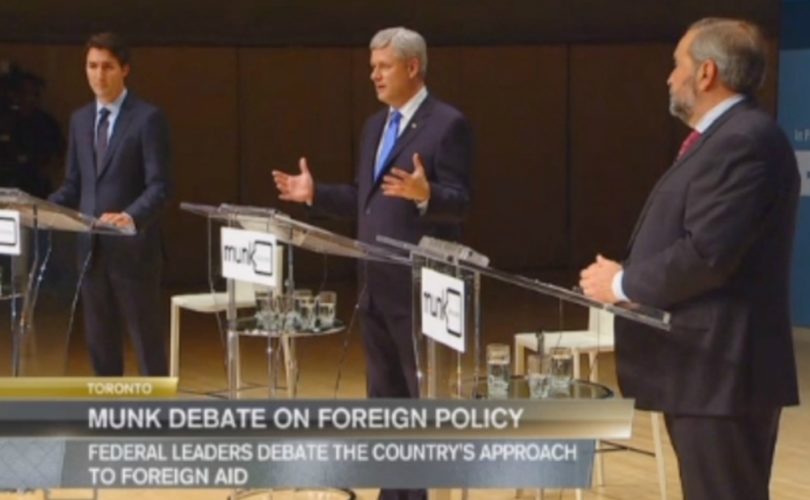 Liberal leader Justin Trudeau, who identifies as Catholic, even went as far as touting the abortion of unborn children as a mechanism for removing families from poverty.

Mr. Trudeau called Prime Minister Harper in French a “prisoner of his ideology” for allowing women to die from “unsafe abortion,” criticizing him for “not doing everything we should be doing to help mothers and the most vulnerable throughout the world to remove people from poverty.”

He suggested at the event in Toronto’s Roy Thomson Hall that funding abortions overseas would be Canada’s way of recommitting to “helping the most vulnerable” and that such a commitment would be “based on science, based on best practices, and not just based on ideology.”

Last year Trudeau outraged a majority of Canadians after he banned pro-life candidates from running in the Liberal Party’s “open” nominations. One poll taken at that time found that 70 percent of Canadians viewed Trudeau’s abortion edict as undemocratic and that Mr. Trudeau had “no right to exclude potential candidates from running for the Liberal Party based on whether or not they are pro-choice.”

NDP federal leader Thomas Mulcair also slammed Mr. Harper at the debate for not funding abortions, citing alleged statistics of large numbers of women who he said “die for lack of access to a safe abortion.”

“We must be realistic and put an end to this doctrinarian approach that excludes a whole series of rights for the women we wish to help in these countries,” he said according to a realtime translation provided as he spoke.

Last May Mulcair released a foreign aid plank of his party with the promise to fund the exportation of abortion to developing countries if elected. Mulcair also promised at that time that an NDP government would funnel more Canadian tax dollars to “women’s rights” organizations overseas.

“Both Trudeau and Mulcair are die-hard supporters of the killing of children in the womb in Canada, so their intention to promote abortion on demand to every corner of the world doesn’t surprise us,” he told LifeSiteNews.

Kelly McParland at the National Post wondered what the opposition leaders were trying to gain by attacking Mr. Harper on exporting abortion overseas.

“I don’t know how many votes there are to be won in accusing the Conservatives of not facilitating enough abortions in developing countries,” he blogged at a National Post site covering the debate.

In response to the attacks, Mr. Harper said that the Conservative government is committed to helping with health care services in developing countries by rallying countries, private organizations, and NGOs to unite on non-divisive issues that everyone can support.

“Our plan is to rally the world. You can’t go out in the world and unite the range of countries we have and independent and third-party organizations — NGO’s — and get into that kind of debate.”

“You need to concentrate on the things that unite people. Saving the lives of mothers and newborns around the world is a cause that has united people, in which we have made real progress, and we need to keep going in that direction,” he said.

The Conservative government first announced in April 2010 that it would not “include funding of abortions” as part of its Muskoka Maternal, Newborn and Child Health commitment overseas.

But despite this pledge, the government continued funding Marie Stopes International — a leading abortion provider that has openly admitted to performing abortions in countries where the procedure is illegal — until May 2011.

In September 2011, the Conservative government awarded a three-year, $6 million grant to the International Planned Parenthood Federation, the world’s leading abortion provider, for “sexual and reproductive health services.” However, the money came with the stipulation that “abortion services will not be funded.”

Hughes told LifeSiteNews that while Mr. Harper “has not been a friend to the pro-life movement in Canada over the years, his consistent position on not funding abortion overseas is encouraging.”

Earlier this month, dozens of Africa’s spiritual leaders released a letter demanding that western powers stop pushing abortion and contraception on their continent — what they called “filthy campaigns that promote a civilization of death” — under the guise of humanitarian aid.

“These political and economic pressures have but one objective: the drastic control and reduction of the African population, the planned destruction of marriage and the family,” they stated. “We Africans must categorically say ‘No’ to this plan, which is killing our continent.”

Pope Francis has frequently condemned what he calls the problem of “ideological colonization” in developing countries whereby foreign powers impose “anomalous models and lifestyles which are alien to people’s identity and, in the end, irresponsible.” He most recently explained the phrase in his September 25 meeting at United Nations headquarters in New York.

The federal election will take place on October 19.

Hughes encouraged Canadians who “believe in the right to life” to not support “leaders and/or candidates who are determined to export the killing of children in developing countries.”