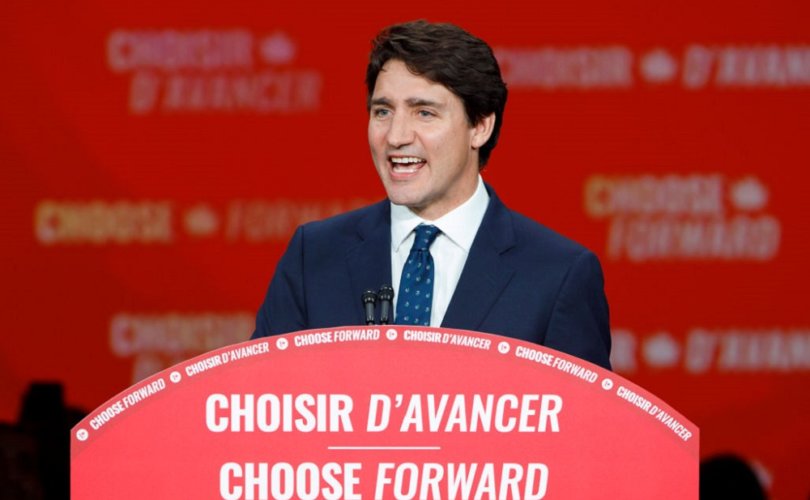 OTTAWA, Ontario, June 19, 2020 (LifeSiteNews) — Prime Minister Justin Trudeau announced yesterday that a voluntary “Made in Canada” free national coronavirus contact-tracing smartphone application will be available to Ontario residents starting July 2, and will follow in other provinces later in the month.

In speaking to reporters yesterday, Trudeau said the app was developed in a collaboration among the Ontario government, BlackBerry, and Shopify, as well as the federal agency the Canadian Digital Service.

“As some people head back to work, testing and contact tracing is crucial,” said Trudeau at his daily press conference.

“I want to stress that this app will be completely voluntary, it will be up to individual Canadians to decide whether to download the app or not, but the app will be most effective when as many people as possible have it.”

Trudeau said yesterday his contact tracing app is designed to be used nationwide, and there are more than 30 million smartphones in the country that can use the app, which “functions entirely on an anonymized basis.”

The app will work by notifying its users if they have been in close contact with a person with the coronavirus. Trudeau said no personal information will be “shared.”

If a user of the app tests positive for the coronavirus, he will be contacted by a local health care worker, who will give the infected individual a random code.  With the code, an infected user can then upload his test results in an “anonymous” way to a national database.

If a person who has the app was near a confirmed positive coronavirus individual who uploaded his test results to the database, they will receive an alert urging them to get tested.

The app’s interface will be managed by each partaking province; however, the Canadian Digital Service will still be in full control of the “secure” national database, which holds all randomized codes.

Trudeau said the app will be first tested in Ontario, which is why this province will get it before any others the day after Canada Day.

In speaking about his province being the first to use Trudeau’s new contact tracing app, Premier Doug Ford of Ontario said yesterday that Ontarians face an “invisible” enemy that must be traced and tracked.

“From the start of this pandemic we have used every tool available to us to fight off this deadly threat,” said Ford when announcing the app yesterday. “We face an invisible enemy, but if we test, we can find it. If we trace, we can track it. And if we have those two things, we can contain it.”

Ford encouraged everyone to download the app as soon as it is available.

Alberta was the first Canadian province to launch a voluntary coronavirus contact tracing application in May, the ABTraceTogether app.

Jay Cameron, a lawyer for the Alberta-based Justice Centre for Constitutional Freedoms (JCCF), told LifeSiteNews in May that the legal group is keeping a close eye on government-issued contact tracing apps.

A June 18 CTV news report says Therrien’s office told the news agency that it had “recently contacted Health Canada” regarding the app.

“We have requested and are awaiting necessary information and, until such time as we receive that information, we have not provided our recommendations to the government,” said Therrien’s statement sent to CTV.

“We are working diligently and responsibly to develop that advice.”

Canada’s deputy prime minister, Chrystia Freeland, noted that each province or territory as well as its local health authorities must decide whether to use the national contact tracing app.

“I think we all appreciate that having a national app in a country where Canadians do travel could be really, really helpful,” said Freeland, adding that she “hopes” there will be a point where “all the provinces and territories are working with us on this.”

Canada’s national contact tracing application was promised by Trudeau months ago. Premier Doug Ford of Ontario had been urging for a national application for some time as well.