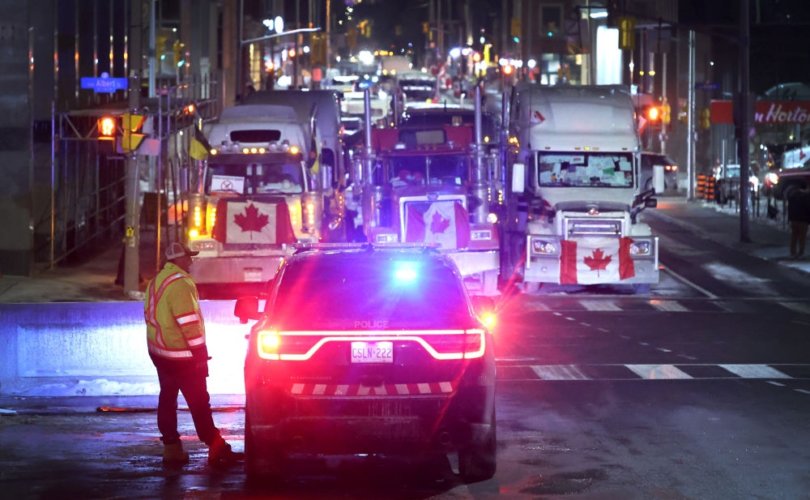 OTTAWA (LifeSiteNews) — Canadian Prime Minister Justin Trudeau appointed a judge with known ties to the Liberal Party to oversee an inquiry into his government’s invocation of the Emergencies Act (EA) that was used to crush the trucker Freedom Convoy in February.

In a press release yesterday from the Prime Minister’s office, Trudeau announced that Ontario appeals court judge Honourable Paul S. Rouleau will serve as the “Commissioner of the Public Order Emergency Commission.”

According to the government, the new “Commission will examine the circumstances that led to the declaration being issued and the measures taken in response to the emergency.”

Trudeau’s office claims the commission will be an “independent public inquiry following the invocation of the Emergencies Act.”

“This includes the evolution of the convoy, the impact of funding and disinformation, the economic impact, and efforts of police and other responders prior to and after the declaration.”

The Trudeau government said that Rouleau is to submit a “final report in both official languages to the Government of Canada on his findings and recommendations, which must be tabled in the House of Commons and Senate of Canada by February 20, 2023.”

Trudeau’s government was legally bound to announce an inquiry into the use of the EA within 60 days of it being revoked.

Trudeau enacted the EA on February 14, claiming it was needed to deal with the Freedom Convoy protesters who were demanding an end to all COVID mandates.

Trudeau revoked the EA on February 23 after protesters were cleared out.

A clause in Section 62 of the Emergencies Act that allows a committee made up by Canada’s parliament to investigate its use is already occurring.

Impartiality of the forthcoming EA inquiry called into question

According to a report in The Counter Signal, donor list records from Elections Canada’s webpage indicate Rouleau is a longtime Liberal Party donor. Strangely, the records are now missing from the site, however.

Of note is that Rouleau is also a former Liberal Party staffer as well.

In a statement yesterday, Rouleau said he is “committed to ensuring that the process is as open and transparent as possible, recognizing the tight timelines for reporting imposed by the Emergencies Act.”

Trudeau said about his inquiry, “Ensuring the safety and security of everyone in Canada and protecting our economy are top priorities.”

“(Rouleau) will look into the circumstances that led to the Emergencies Act being invoked and make recommendations to prevent these events from happening again.”

However, some are questioning how impartial and “independent” Rouleau’s review of the use of the EA might be.

Conservative Party of Canada MP Dane Lloyd said the inquiry into the use of the Emergencies Act to end the Ottawa protests “must have access to all the information necessary to hold the Liberal Government accountable.”

“Anything less than that is unacceptable,” he added.

The Canadian Civil Liberties Association (CCLA) said in a press release that the federal government’s “vision for the emergencies act inquiry fell short.”

“The government’s remarks demonstrate that they are hoping for an inquiry that will look primarily at the actions of the protesters. But the requirement to call an inquiry was put into the Emergencies Act to ensure a robust examination of the government’s use of emergency powers. The broader context is important, but the government’s attempts to divert attention from their own actions is concerning,” the CCLA said.

“The Prime Minister and his Ministers’ remarks missed the point — government accountability — making it even more clear why our lawsuit must continue.”

The CCLA itself challenged the use of the EA by the Trudeau government in a federal court filing that is still pending.

Civil liberties groups, including the CCLA, have called for an independent public inquiry into Trudeau’s use of the EA.