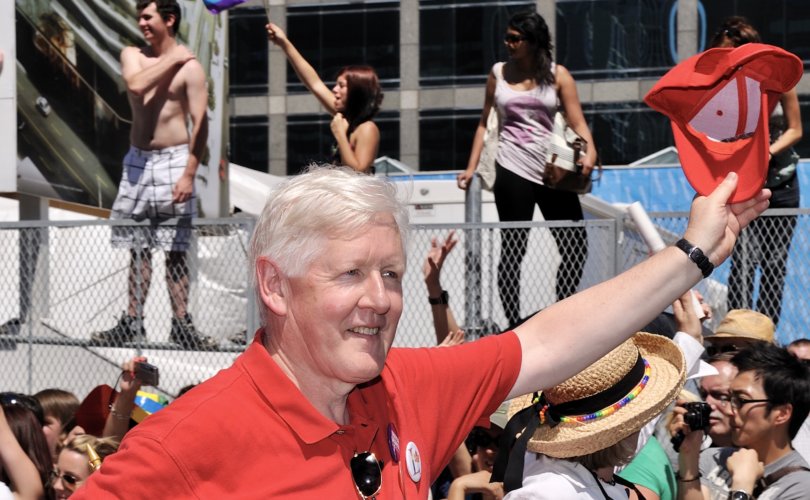 Bob Rae marches in a Pride parade in Toronto.Shutterstock

July 7, 2020 (LifeSiteNews) – A former Canadian premier and federal politician known for his pro-abortion and anti-family voting record has been assigned as Canada’s new ambassador to the United Nations.

“Bob Rae has dedicated his life to serving Canadians and our country, and his experience and thoughtful approach will serve us well in this new role as our Ambassador to the United Nations,” Trudeau said in a statement.

“Together, we will strengthen our international relationships and continue to fully engage on the world stage to help build a better future that benefits everyone.”

Trudeau took over from Rae in 2013 as leader of the Liberal party.

In speaking at a press conference on Monday, Rae said that serving as Canada’s new UN ambassador is an “enormous honor” and something he “might have hoped” would happen.

“We really have no choice but to reinforce the engagements that we have already made,” Rae said in his press conference. “That is going to be my job number one, is to convince Canadians that the importance of what we’re trying to do, but also to persuade as many other countries as we can that we need to work together to reinforce, to renew, to rebuild a successful world order. Nothing short of that will do.”

Asked about China’s recently issued travel advisory to Canada enacted after Canada ended its extradition treaty with Hong Kong, Rae commented that he was a “great reader of George Orwell,” and to “really fully appreciate the world today you have to read 1984.”

“Some strange things are going on, for some countries to suggest this is a bad time to come to Canada is frankly bizarre,” Rae said.

“They (China) have their own reasons for saying it. I don’t think we should take it entirely seriously. Sometimes humor is a great relief when you’re facing these moments.”

Asked about Rae’s new appointment, Campaign Life Coalition (CLC) political operations director Jack Fonseca told LifeSiteNews, “One thing is for certain, Rae’s influence in the UN, which is already an evil organization, will be 100 percent bad. God have mercy on us.”

“This is another terrible appointment by Trudeau. Bob Rae is a pro-death radical who never met an abortion he didn’t like. Rae is also a naked Marxist who once was leader of Ontario’s socialist NDP,” Fonseca said.

“Rae’s voting record while serving as an elected official is also deplorable on the pro-family side of the ledger. He voted to abolish the true definition of marriage and family. He voted in favor of radical transgender ideology legislation that would enshrine compelled speech in law to force Canadians to utter made-up transgender pronouns and would usher in the invasion of private female spaces by confused or predatory biological males.”

Rae, who has a history of promoting the abortion and LGBTQ agenda, started his political career with the federal NDP as an MP before taking the reins of the Ontario provincial NDP party as its leader and later premier. Rae then became affiliated with the federal liberals in 1998.

After becoming Ontario’s premier in 1990, he was quoted as saying to homosexual activists: “I want to assure you of our continuing support for equal treatment of same-sex couples.”

In 2010 as a liberal MP, Rae introduced a “reproductive health” motion, which insisted that the UN maternal health plan of then-Prime Minister Stephen Harper's government include a “full range of family planning, sexual and reproductive health options, including contraception.” His motion was defeated.

In 2016, Rae threw his support behind retired openly homosexual Rev. Brent Hawkes of the Metropolitan Community Church of Toronto after Hawkes was charged with indecent assault and gross indecency.

“He's an enormously hard-working, decent and inspirational man,” Rae said of Hawkes to the CBC in 2016 after hearing of the charges. Hawkes was later found not guilty.

In 2012 at a liberal party planning session, Rae stated clearly his position for a women’s right to “choose” in response to Conservative MP Stephen Woodworth’s motion M312, which was to examine the humanity of the unborn.

“We are clear on this question: The rights of women to choose, to have control over their own bodies, is not a right which is going to be taken away by the Parliament of Canada, and it is not a right which should be subject to some private member’s bill which is going to affect the rights of women to have choice, to have genuine equality, and to have full and complete access to the medicare and the health care that they need,” Rae said of Woodsworth’s motion, which was later defeated.