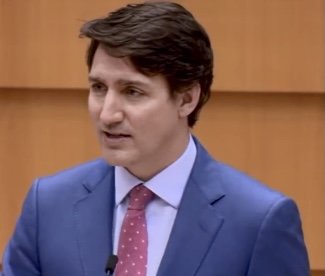 STRASBOURG, France (LifeSiteNews) – On Wednesday, Justin Trudeau delivered a speech to a mostly empty European Parliament where he blasted the Freedom Convoy leaders and supporters, saying they preyed on people’s anxieties.

Almost 80 percent of the Members of European Parliament (MEP) were absent and did not listen to Trudeau speak.

“We saw anti-vaccine and anti-government protests devolve into illegal occupations of our communities and blockades of our borders,” he said.

The Freedom Convoy was not “anti-government” but anti-mandate, asking only that mandates that segregated Canadians and caused them to lose their jobs be dropped. In addition, the blockades are the borders were not part of the Ottawa convoy.

Trudeau says Putin doesn’t understand that the “rigors of debate, that forceful civic engagement” is what makes democracy strong.

On Feb. 14, Trudeau invoked emergency powers to quash protests against his gov’t.

“Democracy at its best will always be stronger than authoritarianism,” he said.

The Canadian PM was roundly eviscerated in a speech by Croatian MEP Mislav Kolakusic.

After extolling the virtues of patriotism and freedom, Kolakusic turned and said directly to Trudeau that “unfortunately, there are also those who want to trample those basic rights.”

He called Trudeau’s government a “dictatorship of the worst kind” and said that “regimes” who rule by “bombs or by harmful medicine” can be overcome by “united” citizens.