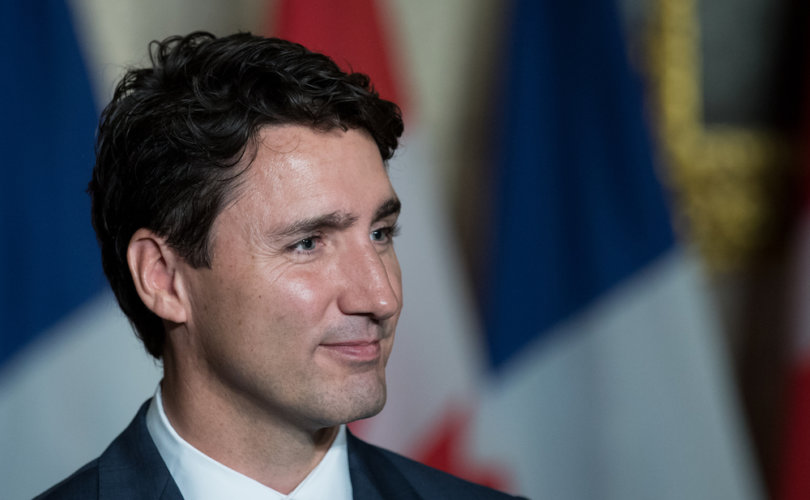 HAMILTON, January 12, 2018 (LifeSiteNews) — Canadians can believe what they want but can’t act on those beliefs when it comes to the right of women to “control their own bodies,” Prime Minister Justin Trudeau said Wednesday.

The Liberal leader made the sweeping comment in defending his government’s new rule that employers must attest to their support of abortion and transgender “rights” to receive student summer job grants.

“This is a really important right that we have established and there are organizations out there that couch themselves as freedom of speech, freedom of conscience,” Trudeau said at a town hall meeting at McMaster University in Hamilton.

“Of course, you’re more than allowed to have whatever beliefs you like, but when those beliefs lead to actions determined to restrict a woman’s right to control her own bodies, that’s where I, and I think we, draw the line as a country,” he said to a loud burst of cheers and clapping.

But Jeff Gunnarson, vice president of Campaign Life Coalition, says the Liberal policy should galvanize Christians to get politically involved.

“Faithful Christians need to take a stand and vote for a candidate who will publicly proclaim to be pro-life, and be willing to help re-educate the public that abortion is not a right under our Charter,” he told LifeSiteNews.

Trudeau defended the policy in response to a student’s question on how much he valued freedom of speech, reported the Huffington Post.

“If you’re pro-life then you are ridiculed and insulted, but if you're pro-choice then you are praised,” the student said to some applause.

Trudeau brought up the “kerfuffle” over the Canada Summer Jobs program to illustrate that “we need to know that there is a difference between freedom of expression and acting on those expressions and beliefs.”

The Liberal policy requires employers sign an attestation that their “core mandate” respects human rights and the “values underlying” the Charter, including “reproductive rights” and the right to be free from discrimination on the basis of, among other things, sexual orientation and gender identity or expression.

The online application is void if the attestation isn’t checked off.

“It does, however, mean, and this is where we get to the crux of the matter, that an organization that has the explicit purpose of restricting women’s rights by removing rights to abortion and the rights for women to control their own bodies is not in line with where we are as a government, and quite frankly, where we are as a society.”

But the Liberals are facing a backlash from faith-based non-profits, charities and institutions that say they can’t in conscience sign the attestation.

Barry W. Bussey, director of legal services of the Canadian Council of Christian Charities, which has 3,400 members, says “most” of the groups who have contacted him “are saying, no, they’re not signing.”

He’s advising them to send in paper applications with an alternative attestation.

The Evangelical Fellowship of Canada has issued a call to action to all members to contact their MPs to protest the policy.​

Canada’s Catholic bishops have also blasted the Liberal policy, charging that it “conflicts directly with the right to freedom of religion and conscience” enshrined in the Charter.

“The Prime Minister’s position at ‘drawing a line’ on pro life positions is utterly unacceptable, since it violates the very Charter of Rights and Freedoms which is cited by the government as the basis of its policy,” he said.

“Any Catholic organization, which professes fidelity to the teachings of the Church, cannot make this affirmation and is thereby excluded from a program which should be open to all law-abiding organizations. A firm and principled rejection of abortion is inseparable from an adherence to the Catholic faith.”

Horgan excoriated the Liberal government’s “abortion absolutism,” pointing out that, contrary to the Liberal belief, no “fundamental right” to abortion exists in “either the Charter of Rights and Freedoms or of case law.”

Moreover, a majority of Canadians oppose “unfettered access to abortion,” he noted, referencing a 2013 Life Canada poll that found six in 10 Canadians “support protection for the unborn at some stage of pregnancy.”

The Liberal prime minister is “essentially demanding a pinch of incense from faith-based employers and churches. If they just give that pinch of incense to Caesar’s statue and thus compromise their beliefs, they can enjoy the pleasure of Emperor Trudeau.”

Canadians “have a situation in which a prime minister so hates pro-life people that he is punishing citizens for their religious and political beliefs, where the crime is in fact, simply expressing their beliefs in a public manner,” Fonseca said.

“We need to kick these bums out,” emphasized Gunnarson.

“And I’m not talking about Liberals only. All MPs who have said nothing about this or approve of it should be unelected in 2019,” he told LifeSiteNews.

“In all the churches every Sunday there are millions proclaiming to love and worship God.  Well, all of us need to show we love God and His commandments by voting for men and women who disavow the status quo on abortion, which kills 100,000 unborn Canadians per year,” Gunnarson said.

“And don’t keep score. It’s not about winning or losing elections! It’s about changing the political landscape to reflect once again the true Canadian values: to uphold the dignity of the human person.”