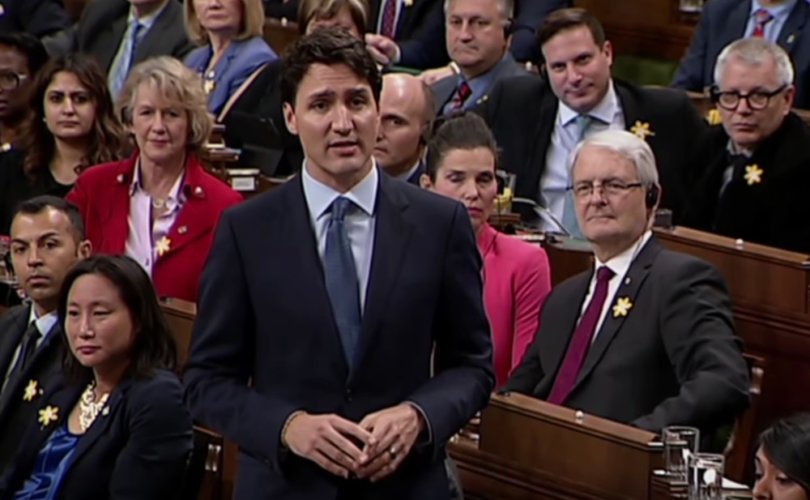 OTTAWA, April 27, 2018 (LifeSiteNews) — A Conservative politician slammed Prime Minister Justin Trudeau this week for essentially accusing a Christian farm that provides holidays to poor families of attacking the Charter of Rights and Freedoms by not supporting abortion.

During the heated Question Period, Carleton MP Pierre Poilievre hammered Trudeau about Waupoos Farm, a “charity in my riding that provides free vacations to poor families who would not otherwise afford one.”

The “prime minister cut their summer jobs this year because they refused to attest to supporting his ideology,” Poilievre charged.

“Organizations that cannot ensure that they will abide by the principles in the Charter of Rights and Freedoms, and indeed will work to take away the Charter rights of Canadians, will not get funding from this government,” the prime minister intoned in reply.

“I know the members opposite don’t like that, because it means standing up for women’s rights and reproductive rights, but it also means we will be unequivocal in always standing up to defend the Charter rights of all Canadians,” added Trudeau.

“We just witnessed a prime minister accuse the Waupoos Farm of attacking the Charter of Rights and Freedoms,” shot back Poilievre to cries of “unbelievable!” and “shame!” from Conservative MPs.

“This is an organization that provides low-income families with a rare recreational opportunity, the chance to have a vacation that they would not otherwise afford,” added the Tory MP, who posted a video of exchange on his Facebook with the caption: “Hypocrisy.”

The Liberals sparked a titanic controversy this year by requiring employers sign an attestation that their “core mandate” supports abortion and LGBTQ “rights” to receive Canada Summer Job grants.

Despite faith leaders decrying the attestation as an “ideological test” they couldn’t sign in good conscience, and amid reports the number of rejected grant applications skyrocketed this year to 1,561 from last year’s 126, Trudeau continues to defend the policy.

Conservative leader Andrew Scheer also blasted the prime minister Wednesday for approving a summer job grant to the B.C. non-profit Dogwood Initiative to hire a student to lobby against the Kinder Morgan pipeline.

Trudeau justified the decision by claiming the Liberals defended free speech and advocacy.

“We will not remove funding from advocacy organizations because we as a government happen to disagree with them,” he said.

The glaring inconsistency was not lost on many observers, including Poilievre.

Trudeau pivoted both times to the Charter.

“No matter how the members opposite try to spin it, the Liberal Party and this government will always stand up for Charter rights,” he said.

“We are simply saying if you want to move forward and get funding from the government you need to demonstrate that you’re supporting the Charter. I think that’s a minimal thing that we can expect of any organization we fund.”

P. Owen Brown, treasurer and board director of the Waupoos Farm Foundation, said he’d prefer not to comment on the Question Period exchange, but confirmed the faith-based charity “learned within the past week that we will not be receiving Canada Summer Jobs funding this summer.”

Waupoos Farm was “founded by a Catholic religious order that is dedicated to serving the poor all around the world,” and its mission and mandate remain “rooted in our Catholic heritage, identity, character, and spirituality,” he told LifeSiteNews in an email.

Signing the Liberal attestation “would have been tantamount to violating the moral and religious beliefs and identify of the organization.”

But the “loss of CSJ funding will certainly hinder our ability to operate and fulfill our mission most effectively,” acknowledged Brown.

The board is now looking at options such as “targeted fundraising efforts” to offset the shortfall.

The charity received about four Canada Summer Job grants annually over the last 10 years, which represented from 10 to 20 percent of its budget, according to a Waupoos Foundation press statement.

The summer students played an “indispensable role” at a peak time in the charity’s mission of providing “a safe and welcoming community environment where families in need can find rest, fellowship, and hope.”

Waupoos Farm accepts any family that qualifies as low income, and “has not, does not, and will not discriminate against families or individuals on any basis,” it stated.

“Our commitment to serving families in a non-discriminatory manner is a fruit of our Christian beliefs, identity, spirituality, and practices, which affirm the dignity and sanctity of all persons.”

Waupoos is “deeply concerned and troubled” that the summer job attestation “has the practical effect of trespassing upon and violating” Charter rights of “freedom of conscience, religion, thought, belief, opinion,” it stated.

Meanwhile, the Huffington Post reported in February that Trudeau’s use of the Charter to defend the summer job attestation has been discredited as “a lot of baloney” by the Canadian Press “Baloney meter.”

Moreover, to express views on abortion is not against the Charter, he said.

“The Charter of Rights includes freedom of expression and freedom of conscience, and if people want to express opposition to abortion, they’re free to do so.”

Queen’s University law professor Nicholas Bala said there is no Charter right to abortion, nor does the Charter “demand that everybody in this country support every right in the charter.”

RELATED: ‘We will not apologize’ for valuing abortion over free speech, says Trudea