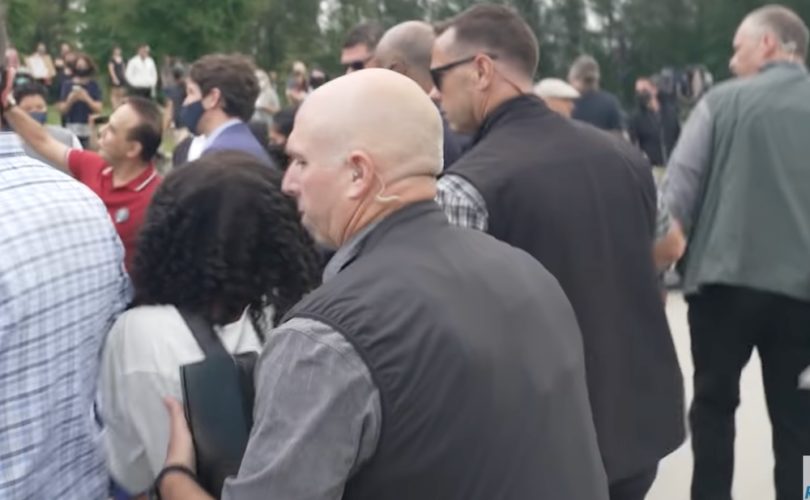 A bodyguard grabbed Humphrey, a reporter with Rebel News, and forcibly removed her from Trudeau’s vicinity as she walked alongside Trudeau and questioned him during his recent stop in British Columbia.

“You talked about Canada’s last wrongs, the past things they haven’t done right,” she said to Trudeau. “When will you speak about the 20 vandalized churches? They’re burning churches and vandalizing them and you’re not calling it a hate crime.”

Trudeau went on to take selfies as Humphrey, a registered member of Independent Press Gallery, was forced aside.

Twenty churches have been burned or vandalized in Canada over the past three weeks, with at least four Catholic churches burned to the ground in one week alone. The wave of crime closely followed intense media coverage of the discovery of hundreds of unmarked graves at the sites of former residential schools run by Catholic religious groups.

On July 2, Trudeau said, “It is unacceptable and wrong that acts of vandalism and arson are being seen across the country including against Catholic churches,” but then he went on to soften his critique.

“One of my reflections is, I understand the anger that’s out there, against the federal government, against institutions like the Catholic Church. It is real, and it is fully understandable given the shameful history that we are all becoming more and more aware of,” Trudeau continued.

“This is not what we need from our political leadership at this point,” commented Brian Lilley of the Toronto Sun. “What we need is someone to stand strongly and condemn in unequivocal terms these actions. Saying, ‘I condemn it, but it’s understandable,’ is not unequivocal condemnation. In fact, it’s not even condemnation at that point, because he’s saying it’s understandable.”

“If this were a mosque under attack after a terrorist attack carried out by Islamic radicals, Justin Trudeau would not hesitate to say in no uncertain terms that this was wrong,” Lilley continued. There would be no wiggle room. There would be no, ‘Yeah, but,” in his statement, which is what his ‘understandable’ comment amounts to.’”

Commenting on the forcible moving of Humphrey away from Trudeau, Ezra Levant of Rebel News commented, “Trudeau prefers to call on hand-picked journalists that he can control. Usually CBC state reporters, or journalists from bail-out newspapers.”

Attorneys drafted a complaint letter to the Royal Canadian Mounted Police on behalf of Rebel News and Humphrey in which they pointed out, “At no point was Ms. Humphrey ever threatening or abusive, nor did she block the Prime Minister’s path or pose any physical danger to the prime minister.”

The letter insisted that Rebel News staff are “entitled to report without being harassed, threatened, or fined,” and “without fear of police sanction.”

Trudeau’s former right-hand man joins Canadian PM in saying church burnings ‘may be understandable’
Discovery of child graves in Canadian residential school demands further questions as many hastily attack the Church
Canadian lawyer calls for churches to ‘burn,’ says she will help defend ‘anyone’ charged with arson
Rescued from the memory hole: Some First Nations people loved their residential schools
Canadian gov’t ignored inspector’s warning in 1907 of ‘prime conditions’ for ‘outbreak of epidemics’ at residential schools
Mayor in Canadian Arctic wants to tax churches: ‘Very clear that the Catholic Church hasn’t done the community any good’