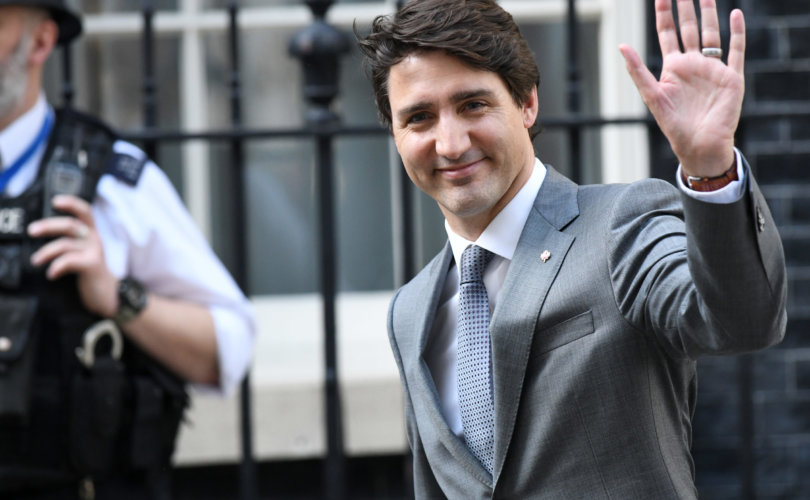 LONDON (LifeSiteNews) – Canadian Prime Minister Justin Trudeau has been called “tone deaf” for singing a rendition of “Bohemian Rhapsody” by the rock group Queen in the lobby of London’s Corinthia Hotel on the eve of the state funeral for Queen Elizabeth II.

The now-viral video of Trudeau, which was first uploaded to Twitter by user Lisa Power on Sunday, shows Trudeau standing at a piano while signing the rock classic.

The incident occurred on Saturday night. Trudeau was in London with a large Canadian delegation to attend Queen Elizabeth II’s funeral, which took place on Monday.

While some initially thought the video was a deep fake, Trudeau’s own office confirmed its authenticity to a Toronto Sun reporter.

The Sun’s Joe Warmington shared the statement he got from Trudeau’s team, which claimed the prime minister was in fact paying “tribute” to the Queen, with his rendition of “Bohemian Rhapsody” from the group Queen.

“After dinner on Saturday, Prime Minister joined a small gathering with members of the Canadian delegation, who have come together to pay tribute to the life and service of Her Majesty,” read the statement by Trudeau’s staff.

“Gregory Charles, a renowned musician from Quebec and Order of Canada recipient, played piano in the hotel lobby which resulted in some members of the delegation including prime minister joining.”

Trudeau hammered on social media for his ‘Bohemian Rhapsody’ antics

Many took to social media to blast Trudeau for showing a lack of decorum regarding the Queen’s death and putting Canada in a negative light.

“Trudeau is celebrating his accession as Queen of Canada by drunkenly singing for an audience at the funeral of his predecessor. Classy,” tweeted Keean Bexte of the Counter Signal.

Trudeau is celebrating his accession as Queen of Canada by drunkenly singing for an audience at the funeral of his predecessor. Classy. pic.twitter.com/kpXTPcQ71f

Looks like Trudeau was jealous that the Queen was getting too much attention at her own funeral… pic.twitter.com/mlgbq7el2H

— Article continues below Petition —
PETITION: Demand the Conservative Party apologize for not resisting Trudeau's COVID regime
Show Petition Text
3777 have signed the petition.
Let's get to 4000!
Thank you for signing this petition!
Add your signature:
Show Petition Text

Corey Morgan of the Western Standard compared Trudeau’s actions to those of a “frat boy.”

“Should anyone be surprised he would use a somber event to act out and make it all about him? It’s his nature & Canada knew that before the last two elections. Voters chose this.”

Should anyone be surprised he would use a somber event to act out and make it all about him?

It’s his nature & Canada knew that before the last two elections.

Twitter user John Lee Pettimore tweeted that another Canadian politician would have shown more class than Trudeau on such a serious occasion.

“Pierre Poilievre would not have been drunk and singing Bohemian Rhapsody on the eve of the Queens funeral. He has a lot more class than that. Trudeau is an embarrassment to Canadians.  #TrudeauMustGo.”

Pierre Poilievre would not have been drunk and singing Bohemian Rhapsody on the eve of the Queens funeral. He has a lot more class than that . Trudeau is an embarrassment to Canadians.🇨🇦 #TrudeauMustGo

Yesterday, a video surfaced showing people booing the prime minister as he was leaving Canada House Monday. Yet another has captured an Englishman’s rage over Trudeau’s heavy-handedness during the COVID pandemic.

“Trudeau you fascist bastard” – even across the ocean in the UK Justin Trudeau cannot escape the contempt of the people and a robust heckling. pic.twitter.com/g7knVdOVfw

Canadian media covers for Trudeau, claiming he was honoring Queen with his singing antics

On Monday the left-leaning Toronto Star, along with many other Canadian media outlets who get government funding, came to Trudeau’s defense.

The Star said they spoke with Charles, the piano player, who said, he along with a small group of Canadians spent a “few minutes” with the “PM late on Saturday.”

“And there was a piano in the lobby and I did play a few U.K. tunes as a spontaneous homage.”

Backlash against Trudeau and his government has escalated in recent days, notably with the now-viral #TrudeauMustGo Twitter trend getting thousands of shares.

The tweets vary in messaging, but they all contain at least one point of contention against Trudeau and his government, notably in how it has treated those who have chosen to remain vaccine free.