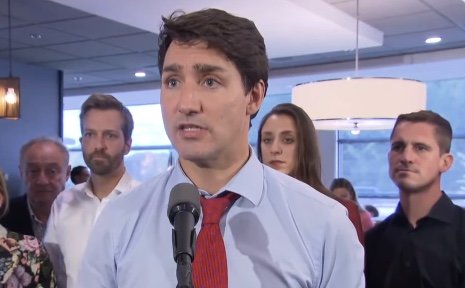 MONTREAL, October 9, 2019 (LifeSiteNews) — Canadian Prime Minister Justin Trudeau created a stir in the media last week when he declared he no longer personally opposes abortion — a view he presumably once held because of his Catholic faith.

But it remains to be seen if Canada’s bishops will respond to what one canonist says may be a canonical crime on Trudeau’s part.

The Liberal leader told reporters in Montreal while on the campaign trail that he has evolved since a CBC news story quoted him eight years ago saying he believes in a woman’s “right” to choose abortion but personally disagrees with it.

“In 2011, I said clearly that I was and always would be pro-choice, but I also, in a context where I was talking about my own personal faith, expressed something that I no longer believe,” Trudeau said, as reported in a Global News video.

“I evolved past that particular perspective. I continue to be and will always be fully pro-choice, but I no longer feel that I can or need to say that I’m against abortion. That’s not for me as a man to say. I will always be pro-choice,” said Trudeau.

Aside from the canonical penalties Trudeau’s past conduct clearly calls for, the prime minister’s latest pronouncement may leave him open to the charge of committing a “canonical crime,” says well-known American canonist Dr. Edward Peters.

“Consistent public advocacy and facilitation of abortion by an elected official is an objectively gravely evil act and, in my view, is grounds for withholding Holy Communion under Canon 915. Trudeau, I think, met those criteria some time ago and in that respect his recent comments simply confirm that conclusion,” Peters told LifeSiteNews.

“But there might be something new going on here,” he said.

Trudeau “seems to be dropping even the pretence of being ‘personally opposed’ to abortion and appears to be rejecting the idea that unborn human life itself is deserving of any protection at all,”observed Peters, who teaches canon law at Detroit’s Sacred Heart Major Seminary.

“If that is where Trudeau is heading, he would not simply be engaging in the gravely evil act mentioned above, he would also be challenging a Church doctrine that is, I think, infallibly proclaimed, namely, that ‘the direct and voluntary killing of an innocent human being is always gravely immoral,’ per Evangelium vitae (1995) 57,” he explained.

“Setting aside for now whether assertions such as those in Evangelium vitae are ‘divinely revealed’ (making their rejection grounds for heresy strictly speaking), the inviolability of innocent human life is nevertheless, I think, a doctrine to be ‘definitively held’ by all the faithful (Canon 750 § 2),” he said.

“Thus, even if Trudeau is not drifting toward ‘heresy’ (see Canon 750 § 1), an act punishable by excommunication under Canon 1364, to the extent that his language implies opposition to a Church doctrine to be ‘definitively held’ (we do not have a pithy term for it, as we do for ‘heresy’), his act could still be punishable as a canonical crime,” concluded Peters.

It’s perhaps surprising that Trudeau, who is running for re-election in the October 21 federal election, has up to this point remained personally opposed to abortion during a political career defined by his abortion extremism.

As Liberal leader, Trudeau banned anyone who was vocally pro-life from running as a Liberal Party candidate, and as prime minister has made access to abortion the cornerstone of the his government’s foreign and domestic policy, including earmarking $7.1 billion by 2030 to fund and promote abortion as part of Canada’s international aid.

At the same time, Trudeau has made much of his Catholic faith, particularly in his early rise in public life, when he was a sought-after speaker at Catholic schools and events, including a leadup to the 2002 World Youth Day.

As related in the 2011 CBC story that prompted the reporter’s question on Friday, Trudeau was “surprisingly upset” when a Conservative MP accused him “of being a bad Catholic.”

He emulates his father Pierre Elliot Trudeau, the Liberal prime minister who legalized abortion in 1969, Trudeau said, adding that, in the words of the CBC reporter, “he was personally very opposed to abortion” but believed in a woman’s “right” to choose to end the life of her unborn child.

Bishops’ inaction verging on scandal: Will they act?

With Trudeau jettisoning his “very strong personal opposition” to abortion, whatever he understands that to mean, it’s unclear if he still considers himself a Catholic.

LifeSiteNews asked the Liberal Party that question but received no response. However, absent a public disavowal of his faith, presumably Trudeau still identifies as a member of the Church of Rome.

However, no Canadian bishop has yet publicly declared Trudeau excommunicated.

Moreover, Trudeau sparked a scandal by presenting himself for Holy Communion during a Mass celebrating Montreal’s 375th anniversary in 2017. To the dismay of many, Archbishop Christian Lépine, known for his solid pro-life stance and orthodoxy, did not deny him, telling LifeSiteNews later he did so “as a gesture of hope” and “to keep in contact and how to keep a bridge open, if I may say so.”

LifeSiteNews contacted the offices of Lépine and Ottawa Archbishop Terrence Prendergast, currently at the Ontario bishops’ fall conference, for a statement on Trudeau’s latest public dissent from Catholic teaching.

Spokesmen for both dioceses confirmed the bishops will not be commenting. The Ottawa archdiocesan spokesperson said this does not preclude the possibility that the bishops may take action privately.

Trudeau’s latest assertion can reasonably be seen as his attempt to score political points in a bare-knuckles, neck-and-neck fight against his greatest threat, Conservative leader Andrew Scheer.

It also underscores a growing hostility in Canada’s media political elites, and the culture itself, toward politicians who dare to even think abortion is wrong.

A Catholic father of five, Scheer was pressed by opponents, including Trudeau, to declare his personal views on abortion during the French language leaders’ debate, but repeatedly dodged the question, reported the Huffington Post.

However, the Tory leader came clean in the English-language debate, according to the Globe and Mail.

“I am personally pro-life. It is OK in this country to have a difference of opinion,” Scheer said, before reiterating his promise that he would not reopen the abortion debate if the Conservatives form government.

Whatever his motives, Trudeau hit a certain truth in admitting the incoherence of being “personally opposed” to abortion while putting in place policies and funding to expand abortion at home and globally.

There’s also a measure of incoherence in a politician who is personally opposed to abortion but refuses to try advancing public policies to protect the child in the womb when there are no clear impediments — save political expediency — to doing so.