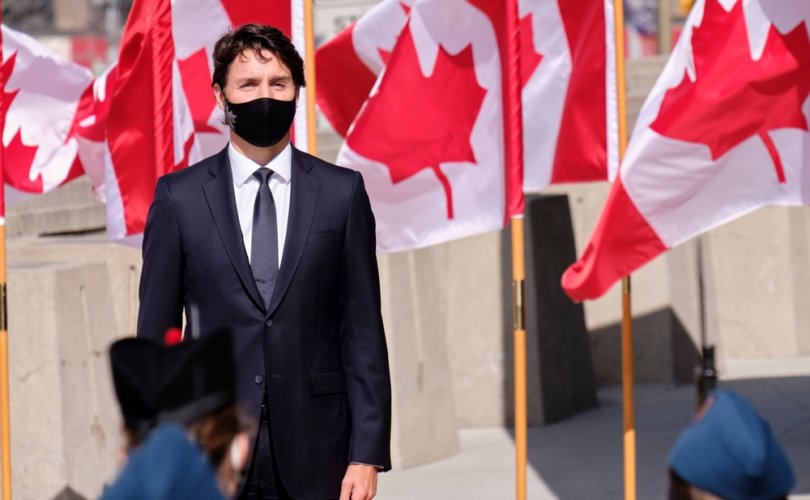 OTTAWA (LifeSiteNews) – Canadian Prime Minister Justin Trudeau doubled down on his rhetoric against the Freedom Convoy and the border blockades during a press conference Friday. He threatened “real consequences with respect to their [truckers’] licenses to their jobs.”

He also threatened the families of truckers at the protest if they did not leave Ottawa, but did not indicate what the consequences might be.

Prime Minister Trudeau warns protesters: “If you’ve joined the protest because you’re tired of COVID, you now need to understand you are breaking laws,” and that “the consequences are becoming more and more severe.”

Asked repeatedly if he would bring in the military to police civilians, he said that the government is nowhere close to employing the military and that it should be avoided “at all costs.”

Many of the truckers and supporters have admitted to being vaccinated, but they are against mandatory vaccination nonetheless.

Trudeau also said that “we are concerned about violence.” So far, all evidence points to the protest in Ottawa being peaceful and without violence.

The prime minister intimated that changes to federal border regulations may be coming. However, vaccine mandates for federally regulated travel, such as on planes and trains, are not changing anytime soon. This means that millions of Canadians are still banned from flying.

Trudeau said he has spoken with President Joe Biden and the two discussed the border situation. No real specifics of their conversation were given regarding what might be done to end the vaccine mandate that is causing the standstill with truckers.

He did mention speaking with Michigan Gov. Gretchen Whitmer about solving the border crisis.

Questions have arisen as to whether Whitmer has attempted to interfere with Canadian sovereignty by offering heavy machinery to remove trucks blockading the Canadian border.

Tucker Carlson says that Gov. Whitmer may have offered Canadian authorities help moving trucks off the Ambassador Bridge, and questions whether it is interfering in the democracy of another country. pic.twitter.com/2YDYJUEBxJ

Members of his own party and of the opposition parties have been calling for the prime minister to offer a path forward to move out of the pandemic, but he has yet to offer and steps to restore constitutional freedoms to Canadians.