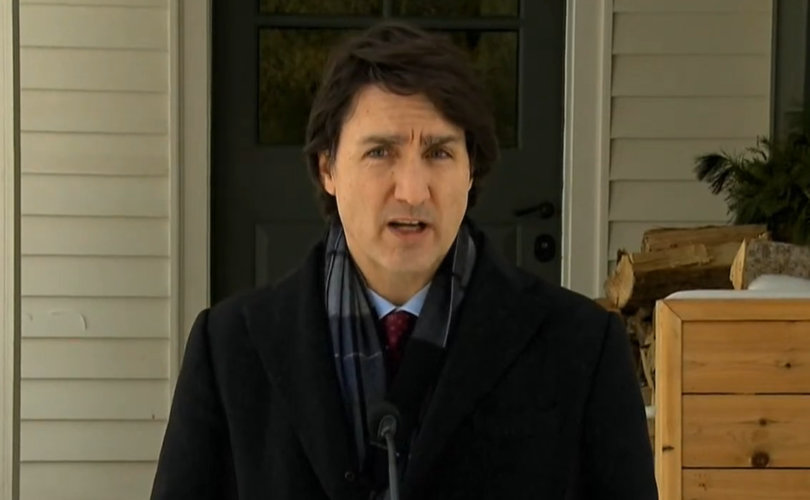 OTTAWA, Ontario (LifeSiteNews) – Canadian Prime Minister Justin Trudeau broke his silence on the trucker convoy on Monday with a press conference, claiming the freedom movement was tarnished by Nazi and racist sympathies.

Tens of thousands of Canadians fighting against vaccine mandates, along with thousands of trucks, descended on Ottawa over the weekend to stage one of the largest protests in Canadian history. Similar protests took place across the country as well.

Justin Trudeau fled Ottawa just before the convoy of trucks arrived, citing exposure to COVID, even though at the time he tested negative. Today he tweeted that he had tested positive despite being triple vaccinated.

This morning, I tested positive for COVID-19. I’m feeling fine – and I’ll continue to work remotely this week while following public health guidelines. Everyone, please get vaccinated and get boosted.

One of the organizers of the convoy is an Indigenous woman, and another is a Jewish man.

Did you know #ConvoyForFreedom2022 organizer Tamara Lich is Métis &
Benjamin Dichter is Jewish?
They are not white supremacists, and saying otherwise is grossly ignorent. pic.twitter.com/14zrP2pDoP

Within the first couple of minutes of the press conference, Trudeau said that “freedom of expression, assembly and association are cornerstones of democracy, but Nazi symbolism, racist imagery … are not.”

He was asked by a reporter if he would meet with the truckers or attend the protest, as he attended, for instance, the Black Lives Matter (BLM) demonstrations during the height of lockdown in 2020, but he said he would not.

“I have attended protests in the past when I agreed with the goals,” referring to BLM, but he is choosing to stay away from the trucker protest because of “hateful rhetoric” and “violence toward citizens.”

Trudeau’s expressed unwillingness to support the trucker convoy movement due to his belief that there is a risk of violence associated with the movement is in contrast to his government’s past actions that saw him hand over a compensation cheque of $10 million to a convicted terrorist who killed an American soldier.

Despite Trudeau’s claims of violence and hateful messaging present at the protest, police on scene commented on how peaceful the event was.

A man was seen at the protest carrying a Confederate flag with a truck emblem at the center, which was shared around social media in an attempt to paint the movement as racist. However, attendees exposed the person carrying the flag — who completely hid his face — and political commentators speculated the man was a provocateur.

Justin Trudeau himself has a history of wearing blackface, having done so multiple times.