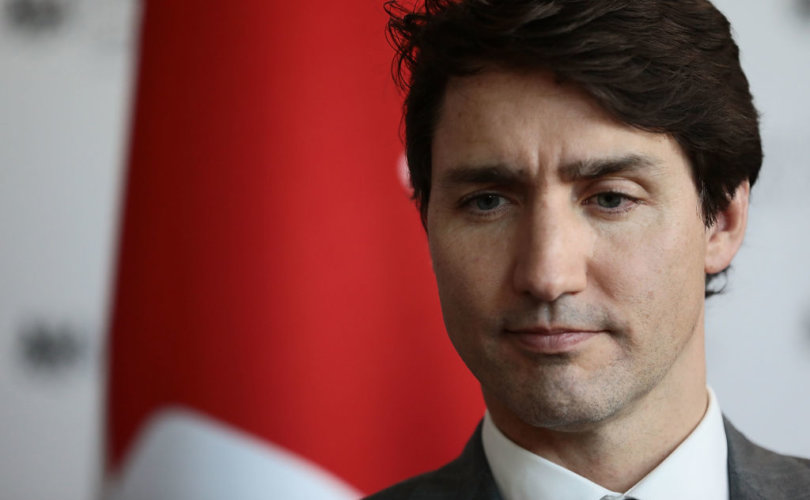 OTTAWA, April 24, 2020 (LifeSiteNews) — Justin Trudeau’s Liberal government is forcing businesses, not-for-profits and registered charities applying for an emergency interest-free loan to help them through the coronavirus lockdown to “confirm” that they do not “discriminate” on the basis of “gender,” “sexual orientation,” and “religion,” among other things, in order to receive the financial help.

Borrowers who do not wish to confirm the “non-discrimination” clause are excluded from the government-run program based on this stipulation, which appears to be unique to the Canada Emergency Business Account (CEBA).

Part of the Liberals’ relief package for Canadians suffering hardship because of coronavirus pandemic shutdowns that Parliament passed last month, the CEBA is an interest-free loan of up to $40,000 for businesses, non-profit groups and registered charities that generate a portion of their income from the sale of goods and services.

The CEBA program explicitly states an applicant will be excluded unless it confirms that it “does not promote violence, incite hatred or discriminate on the basis of sex, gender, sexual orientation, race, ethnicity, religion, culture, region, education, age or mental or physical disability.”

The Liberal move is troubling, according to Marty Moore, a lawyer with the Calgary-based Justice Center for Constitutional Freedoms (JCCF).

“There is legitimate concern that the federal government, with a track record of discriminating against beliefs it disagrees with, will use the CEBA to also discriminate against religious entities,” he told LifeSiteNews in an email.

Notably, the Trudeau Liberals denied Canada Summer Job (CSJ) grants in 2018 to employers who refused to sign an attestation that they supported “reproductive” rights, that is, abortion, and transgender “rights.”

While the Liberals scrapped the reviled attestation a year later in the face of massive backlash, they continue to deny CSJ grants to faith-based groups because of their beliefs, Moore told LifeSiteNews.

The JCCF is currently suing the Liberals on behalf of BCM International, a Christian organization that runs the Mill Stream Bible Camp & Retreat Centre in Peterborough, which was denied CSJ funding for the summer of 2019.

“Given the federal government’s use of a non-discrimination rule in the Canada Summer Jobs program to target groups with traditional religious beliefs, there is concern this new rule in could similarly be abused,” he said.

In the case of the CEBA, the government’s website states an applicant will be excluded unless it confirms that:

2) It is not a union, charitable, religious or fraternal organization or entity owned by such an organization or if it is, it is a registered T2 [i.e., a non-profit] or T3010 [i.e., a registered charity] corporation that generates a portion of its revenue from the sales of goods or services;

3) It is not an entity owned by individual(s) holding political office; and

4) It does not promote violence, incite hatred or discriminate on the basis of sex, gender, sexual orientation, race, ethnicity, religion, culture, religion, education, age or mental or physical disability.

Pro-life, pro-family, and various religious-based groups have long been concerned about “discrimination” and “hatred” labels being attached to them for their work of defending life, marriage between a man and a woman, and the natural family that might exclude them from the right to participate in the public sphere and from accessing government-run programs.

One problem with the fourth criterion is both that faith-based organizations must confirm they don’t discriminate on the basis of religion, and that the attestation crucially “lacks reference to ‘contrary to applicable laws’,” Moore said.

“A religious organization has a legal right to hire those who align with its beliefs to carry out its religious purposes,” he pointed out. “The law permits that.”

But as the CEBA is structured now, “a religious organization that hires in accordance with its religious beliefs may be precluded from agreeing to this attestation, unless it is implied that it only refers to discrimination ‘contrary to applicable laws’,” Moore said.

“Some religious organizations are very scrupulous as to what they sign, we all learnt that from the summer jobs program; it’s possible they’ll self-select out.”

If the Liberals added “the appropriate caveat ‘contrary to applicable laws’… in the fourth attestation, that would provide the correct legal standard, and theoretically allow non-discriminatory access to the CEBA,” Moore observed.

But even if the Liberals did so, there would be no guarantee that they would not exclude a religious organization that applies for the CEBA, based on the way the government has administered the CJS grants, he said.

The Canada Summer Jobs program does, in fact, state that an employer will be denied CSJ grants only if it discriminates “contrary to applicable laws,” Moore explained.

“But that has not stopped the federal government from discriminating against religious organizations, even though their activities do not discriminate contrary to law, they simply have their own belief system,” he said.

“So with the Canada Summer Jobs program, essentially what you have is that the federal government has written a rule that might be legitimate on its face, but in practice they ignore the rights of religious organizations to hire in harmony with their beliefs, and use that rule in an illegitimate way.”

He also noted that the CEBA “appears designed to provide support to businesses and non-profits that derive their income from the sale of goods and services.”

“Consequently, many religious and charitable organizations are likely not eligible to participate in the CEBA program on account of not deriving income from the sale of goods and services,” he said.

LifeSiteNews contacted the office of Finance Minister Bill Morneau to ask if the Liberals will add “contrary to applicable laws” to the fourth exclusion criterion for the CEBA, and if the minister could assure Canadians the Liberals would not deny CEBA to faith-based businesses because of their religious beliefs.

The ministry replied April 17 that it was working on a response. However, to date, no statement has been forthcoming.