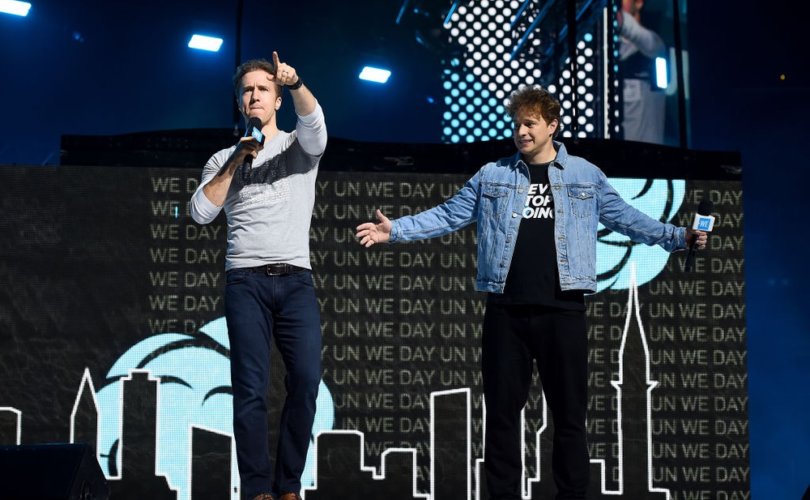 OTTAWA, July 3, 2020 (LifeSiteNews) — Canada’s Liberal government and WE Charities have ended their controversial agreement to have the charity manage a $900-million student summer volunteer grants program.

The announcement came a day after a Rebel News exclusive report revealed that WE Charity founders Craig and Marc Kielburger have donated to Prime Minister Justin Trudeau’s political campaigns and the Liberal Party.

“According to documents we’ve uncovered, Craig Kielburger donated $2,400 in two installments to Justin Trudeau directly in 2013. In 2011 he also donated to the Ontario Liberal Party,” Keean Bexte of Rebel News reported Thursday.

Moreover, during the time Trudeau has been in power, “the Kielburger organization has scooped over $5,197,155 in taxpayer funded contracts with Canadian Heritage, Employment and Social Development Canada, and Environment and Climate Change Canada,” Bexte wrote.

Trudeau announced the Canada Student Service Grant (CSSG) June 25, along with the news that WE Charities would be the program’s sole administrator.

The CSSG provides eligible students up to $5000 toward the cost of returning to school in the fall in return for their volunteer work with non-profit groups to support Canada’s coronavirus pandemic response.

The one-time payment is “based on the number of hours each volunteer completes, with $1,000 provided for each 100 hours completed, up to a maximum of $5,000 for 500 hours,” stated the government’s press release.

However, controversy erupted over Liberals’ decision to outsource administration of the CSSG solely to WE Charities, which has close ties to the Trudeaus.

WE Charities is but one branch of WE, which has grown from the child advocacy group Free the Children that Craig Kielburger started in 1995 at age 12, into an international organization that bills itself as a movement that “empowers people to change the world.”

The prime minister, his mother and his wife have made a number of appearances at WE events, and Sophie Grégoire Trudeau hosts a podcast for WE.

The federal Conservatives called for an investigation into the agreement, stating in a letter to the auditor general that outsourcing the CSSG undermines Parliament’s ability to monitor the program, the CBC reported.

Trudeau initially defended the decision, stating that civil servants chose We Charities as best suited to run the federal program.

That was reiterated by Chagger, who in announcing the agreement’s end on Friday said that Employment and Social Development Canada (ESDC) had advised that a third party manage the CSSG, “given the scope and scale of the program” and the “urgent need to deliver” it.

Students who have already applied and placed as volunteers “won’t be adversely affected” by the decision, and WE Charities has “decided to return any funds that had already been received,” she said.

The Liberals earmarked about $19 million for WE Charities to manage the program, but the final amount was contingent on how many students took part. The charity would not say how much it received or paid back, Canadian Press reported.

In a statement also released Friday, the Kielburgers said the CSSG program has “been enmeshed in controversy from the moment of its announcement” which “has not abated.”

“Our concern is that to continue in this way, the program itself will begin to suffer – and as a consequence, opportunities for students might be negatively affected.”

They stated that the government approached WE Charities in late April about managing the program, and that the launch last week was so successful that CSSG can now be “otherwise administered.”

In the week since the program began, more than 35,000 students from all provinces and territories have applied, and include a “wide diversity of applicants with 64% visible minority and 10% LGBTQ2+.”

WE Charities is waiving all costs of the launch, and also withdrawing the volunteer positions it offered under the CSSG “in order to avoid any perceived undue benefit,” the Kielburgers stated.

According to Bexte, WE Charities would have paid student volunteers at “33 per cent below minimum wage in some cases to support the efforts of the left-wing charity,” and taxpayers would have paid for students “to become progressive social influencers for two brothers that are financial donors to Justin Trudeau’s political campaign.”

The WE organization is known for its stadium mega-show WE Days that students “earn” the right to attend by joining the WE Schools program, in which they commit to one global and local action for change during the academic year.

Although many Catholic school boards participate in the WE Schools program, WE Days often feature sexually charged acts by performers such as rapper Big Sean, Jennifer Lopez, Kardinal Offishall, as well as appearances by abortion advocates such as Harry Potter film star Emma Watson and Trudeau, Canada’s most pro-abortion prime minister.

The Kielburgers have stated in the past that they are Catholic, but Marc Kielburger admitted in March 2011 in a letter to the Ottawa Catholic School Board that Free the Children stocked contraceptives at their Baraka Medical Clinic clinics in Kenya. The Kenyan bishops asked Canadian and U.S. Catholics to stop funding the charity for this reason.

The brothers signed a Mother’s Day Manifesto in 2011 denouncing the Conservatives’ planned funding cuts to the International Planned Parenthood Federation, describing the abortion provider as “an organization that provides reproductive health services abroad,” and the government’s action “paternalistic refusal to offer women in Africa the same rights offered to women in Canada.”

Kielburgers: We’re Catholic but don’t take a stance on abortion

Kielburger’s Free the Children board chairman a leading homosexual activist