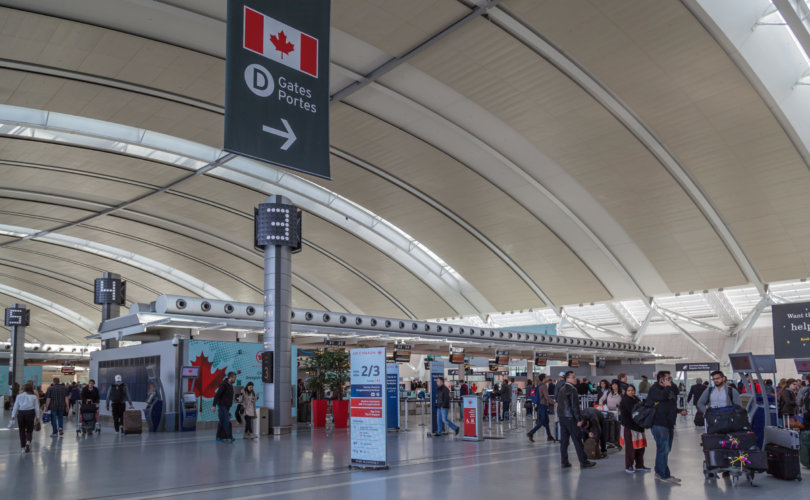 OTTAWA (LifeSiteNews) – Even though Canadian airports are some of the most delayed in the world, the Canadian federal government of Prime Minister Justin Trudeau is bringing back a much-maligned mandatory random COVID testing scheme for arriving air travelers.

In an announcement yesterday, the Trudeau government said its random COVID testing scheme will resume July 19 at four major airports, Vancouver, Calgary, Montreal, and Toronto. This time, however, testing will be done offsite.

“All testing for air travellers, for both those who qualify as fully vaccinated and partially or unvaccinated people, will be completed outside of airports, either via an in-person appointment at select testing provider locations and pharmacies, or a virtual appointment for a self-swab test,” the government says.

The federal government of Trudeau “suspended” a COVID travel vaccine mandate on June 20 but kept in place the much-maligned ArriveCAN app, which makes travelers reveal their COVID jab status upon arrival into Canada.

As it stands now, all travelers arriving in Canada must use the ArriveCAN app to submit their travel and contact information, as well as any COVID vaccination details, before crossing the border or boarding a flight.

ArriveCAN will be the tool that selects whether or not one is selected for random COVID testing.

Canadians who are not jabbed are allowed to come home to Canada but must use the ArriveCAN app, produce a negative COVID test, and quarantine for 14 days.

Earlier in the month, the Trudeau government threatened to fine Canadians who do not use the ArriveCAN app.

The return of mandatory random COVID testing comes despite firm opposition from Canada’s travel and tourism industry, who last month urged the Trudeau government to drop all COVID health measures.

In a statement yesterday, the National Airlines Council of Canada (NACC) said that signaling out air travelers for random COVID testing does not make sense and must end.

“We reaffirm our position that it is time to utilize alternative methods of assessing presence of COVID-19 in the community, rather than rely on testing of travellers to do so. This is in line with over 50 countries that have removed barriers to travel altogether,” the NACC said.

The NACC noted that “travel remains the only industry, across Canada, that is subject to testing and mandatory isolation requirements of 10 days, which is completely out of step with provinces and territories.”

“All other activities across the consumer economy, including concerts, sporting events, and large gatherings are not subject to these requirements. We call on the federal government to no longer single out travel as the only consumer activity with excessive public health requirements,” it added.

Conservative Party of Canada (CPC) MP Melissa Lantsman, who for months has been voicing her opposition to COVID jab mandates and other travel measures, blasted the return of random COVID testing.

“With airports still in chaos, Trudeau is bringing back random COVID testing of vaccinated air travellers. This will only make things worse for travellers. Stop the political theatre and fix our airports,” tweeted Poilievre.

In recent days, Canadian airports and airlines were ranked as the most delayed in the world.

Despite this, the Canadian government has extended its current COVID border measures until at least September 30.

Masking on airplanes and trains remains mandatory, but cruise ships are not included in the new measures.