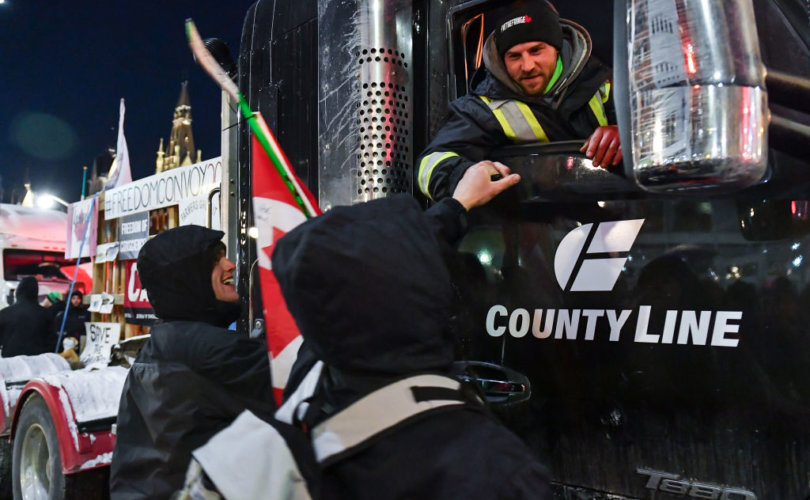 OTTAWA (LifeSiteNews) — Citing “cabinet confidentiality,” the government of Canadian Prime Minister Justin Trudeau is refusing to disclose why it used the Emergencies Act (EA) to crush the trucker Freedom Convoy in response to a rash of legal challenges against its use.

Currently, four legal organizations are challenging the Trudeau government. The EA was enacted on February 14 to shut down the Freedom Convoy, which took to the streets of Ottawa for three weeks demanding an end to all COVID mandates.

According to a recent report in the Globe and Mail, court documents show that the “confidentiality” of what goes on in Trudeau’s cabinet is being used as the reason the government will not divulge details of why it used the EA.

Canada’s Evidence Act says that when a government wants to use “cabinet confidentiality,” federal courts will refuse to look at evidence relating to any cases.

As reported by the Globe and Mail, the Trudeau government will look to argue that because the EA has now been rescinded, the case is now more or less over.

According to a legal document, the Trudeau federal government claims that allowing lawyers to view secret documents would “entirely undermine the principle of cabinet confidentiality.”

The provincial government of the province of Alberta is looking at joining the legal cases as an intervenor.

The Justice Centre for Constitutional Freedoms (JCCF) is also suing the federal government for its abuse of the EA.

Civil liberties groups, including the CCLA, have called for an independent public inquiry into Trudeau’s use of the EA.

On Monday, Trudeau appointed a Liberal Party-friendly judge to oversee his government’s invocation of the EA.

Trudeau’s government was legally bound to announce an inquiry into the use of the EA within 60 days of it being revoked.

The CCF blasted the Trudeau government’s argument of “cabinet confidentiality” in its court challenge, likening it to a catchphrase credited to King Louis XIV of France in the 17th century: “L’état, c’est moi.” (I am the state.)

According to the CCF, the group is asking that the federal government disclose information exclusively to the judge and counsel.

“If the government can use the Emergencies Act and enact the most draconian measures to crush dissidents, and then refuse to explain why this was justified because the reasons are ‘confidential,’ then democracy is truly dying in Canada,” Bernier tweeted yesterday.

“You were required by law to call the inquiry, you don’t get to do a victory lap of transparency for following the law. Wave cabinet confidence and let Canadians know the full story. That would be transparency,” Dancho tweeted Tuesday.