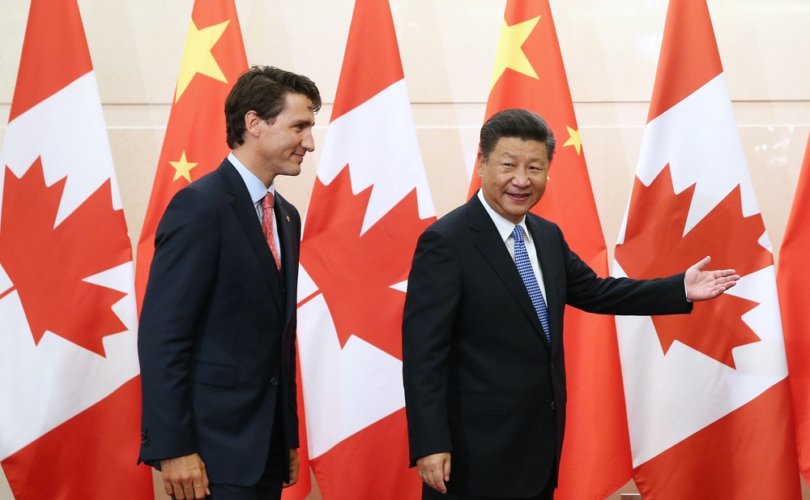 David Mulroney told Canada’s Virtual Rally and March for Life on Thursday that two things strike him about Trudeau’s actions.

“One is the fundamental dishonesty, and just as with the Chinese, where they use euphemisms, they call things by other names to pretend they’re not doing what they’re actually doing, we see the same thing here in Canada,” said Mulroney.

“So that under rubric of the ‘feminist foreign policy,’ all kinds of things are happening, including things that are very detrimental, of course, to…women and girls,” Mulroney told Campaign Life Coalition’s Josie Luetke in a live interview.

His second concern is the Trudeau government’s “radical attack on freedom of speech, freedom of belief, and freedom of religion.”

Mulroney noticed that particularly when the Liberals required employers to attest they “were ideologically compliant with the government’s policies when it came to abortion and when it came to ideas about gender” in order to get summer job grants, he said.

“I never thought that I would see that,” he added. “I’m much more worried about it now and I see it coming from our own government.”

Canada’s ambassador to China from 2009 to 2012, and president of St. Michael’s University from 2015 to 2018, Mulroney was among a roster of prominent pro-life guests featured during the three-hour Virtual March for Life organized by Canada’s national pro-life political lobbying group Campaign Life Coalition.

The March for Life is Canada’s biggest annual pro-life event and marks the legalization of abortion on May 14, 1969. Since then an estimated four million unborn children have been killed by abortion in Canada.

This year Campaign Life hosted its first ever Virtual March for Life with the 23rd annual march cancelled because of coronavirus pandemic restrictions.

Indeed, the pandemic, which originated in Wuhan, China, has caused people around the world “to realize how dangerous the Chinese Communist Party is,” Luetke observed.

Confirming the claims of many critics, a leaked dossier by the “Five Eyes” intelligence alliance — the United States, Canada, United Kingdom, Australia, and New Zealand — found that President Xi Jinping’s regime covered up the outbreak and lied about human-to-human transmission of the virus, thus allowing its catastrophic spread around the globe.

Mulroney spoke to Luetke about China’s infamous “one-child” population control program, and the state of religious freedom there.

“What I noticed in China, and unfortunately I never thought I’d have to say this but I notice it in Canada, too, is that there’s such a fundamental connection between respect for religious belief, religious freedom, having a robust religious culture and a defense of life,” he said.

“And China, unfortunately, offers neither.”

Just as Canada “opened its door to abortion in 1969, the Chinese began to build their family planning and abortion campaigns in the 1970s,” Mulroney said.

The “shocking” thing was that “China was seen as the big objective of the international abortion lobby and industry,” and foreign advisors — Ford Foundation, Rockefeller Foundation, United Nations, International Planned Parenthood — influenced Beijing in implementing its brutal one-child policy, which by the 1980s was “at full steam,” he said.

“They were aborting massive numbers of children every year and the international backers of this like to tell people that it was voluntary, that it was helping China build its economy. It was nothing of the kind,” observed Mulroney.

“And when finally stories began to emerge of coerced abortion, of forced abortion, of the violence done against women, and of course, against millions and millions of fetuses, the international lobby got very silent.”

There was also silence about the “growing recognition of the huge impact of sex-selective abortion” which has “basically blighted China’s economic progress. It’s now a country with a statistically abnormally large population of men,” Mulroney said.

“It’s led to things like the trafficking of women, the importation of brides,” and the creation of “these very sad families, where you have a husband and a wife, possibly one child, supporting their parents and grandparents,” he added.

“So it’s been a disaster for China that no one will talk about,” he said. “Canadian supporters of abortion did not want to hear it.”

Moreover, China “shows no signs” of learning from this, and is one of the countries encouraging an “international campaign against life” — as is Canada’s government, he said.

Trudeau’s then-foreign minister, Chrystia Freeland, said in 2017 that their government puts abortion “at the core of our foreign policy,” and the Liberals have pledged $7.1 billion by 2030 to promote and provide abortion in the developing world as part of its international aid.