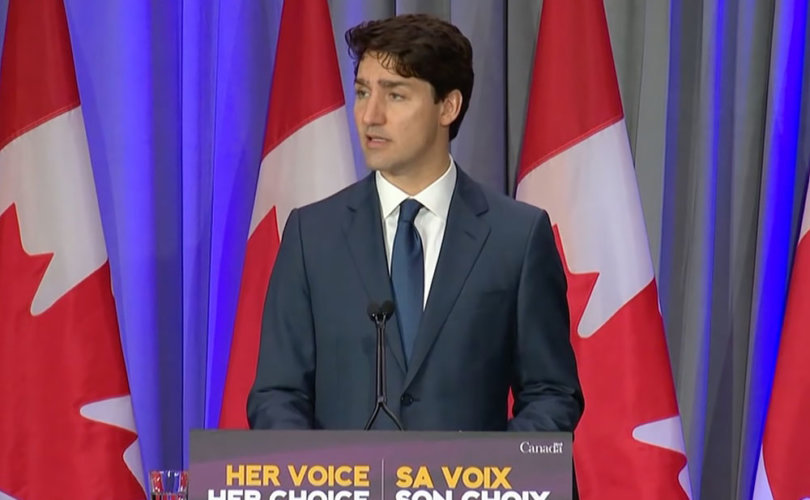 OTTAWA, May 8, 2020 (LifeSiteNews) — Canadian Prime Minister Justin Trudeau’s Liberal government released a joint statement Wednesday on behalf of 59 nations that pushes global access to “sexual and reproductive health needs” as a response to the coronavirus pandemic.

“We call on governments around the world to ensure full and unimpeded access to all sexual and reproductive health services for all women and girls,” says the statement released May 6 by Global Affairs Canada.

The Trudeau government is well known for aggressively promoting abortion on the international stage, pledging $7.1 billion by 2030 to fund and promote abortion as part of its international aid, and describing global abortion access and “sexual reproductive rights” as “at the core” of its foreign policy.

The Global Affairs Canada “Statement on protecting Sexual and Reproductive Health and Rights and Promoting Gender-Responsiveness in the COVID-19 Crisis” was issued by the ministers of 37 countries on behalf of the “peoples and governments of 58 nations.”

Responding to the “unprecedented threat” of the coronavirus pandemic — which originated in Wuhan, China — “requires solidarity and cooperation among all governments, scientists, civil society actors and the private sector,” it noted.

“Funding sexual and reproductive health and rights should remain a priority to avoid a rise in maternal and newborn mortality, increased unmet need for contraception, and an increased number of unsafe abortions and sexually transmitted infections,” it stated.

“Sexual and reproductive health needs, including psychosocial support services, and protection from gender-based violence, must be prioritized to ensure continuity,” it reiterated at another point.

The signatory countries also support “multilateral” efforts by international bodies such as the UN and the WHO, and “welcome UN General Assembly resolution entitled ‘Global Solidarity to fight COVID-19.’”

And therein lies the rub, according to Stefano Gennarini of the Center for Family and Human Rights (C-Fam).

There are actually two competing UN draft resolutions on COVID-19 and women, with the major point of contention between them “national prerogatives on abortion,” as he explained in a recent analysis.

Both are based on UN Secretary General Antonio Guterres’ April policy brief “The Impact of COVID-19 on Women,” which proposes that priority policies for women during the pandemic include “sexual and reproductive health services.”

Moreover, Guterres’ brief and both initial draft resolutions “specifically identify ‘sexual and reproductive health’ as essential ‘health services’ that should not be disrupted by COVID-19 health policy decisions,” wrote Gennarini.

“It is unclear if this same level of priority will be retained after the resolutions are discussed remotely by UN member states,” he said.

This is the context in which Global Affairs Canada’s 59-nation joint press release must be viewed.

The statement is “not binding in any way,” but is “meant to influence ongoing negotiations” by UN membership on the two General Assembly draft resolutions on women and the COVID-19 crisis, Gennarini told LifeSiteNews.

“It is actually pretty common for UN agencies to work with some wealthy pro-abortion countries and approach ministers inside countries ahead of negotiations to sign on to such statements in order to try and predetermine the outcome of ongoing negotiations,” he added.

So the May 6 statement’s purpose “is to consolidate the coalition of countries led by Nordic countries, the European Union, and Canada, who stealthily promote abortion in UN policy,” said Gennarini.

This coalitions is now “threatened by the efforts of the Trump administration to keep abortion out of international maternal health and family planning policy by opposing ambiguous terms like ‘sexual and reproductive health,’” he said.

That phrase was created by the “abortion industry lobby to build international political support for abortion, without having to expressly mention abortion, an issue which is never politically popular” by bunching abortion “together with non-controversial policies like maternal health and family planning,” Gennarini told LifeSiteNews.

The statement reveals how “embattled” the pro-abortion coalition is by the Trump administration’s efforts to keep abortion off the UN agenda, he added.

Although it “endorses efforts of the WHO and other UN agencies to make abortion essential during the COVID response, you will notice that nowhere in the statement does it expressly support abortion. It merely speaks negatively about a rise in unsafe abortions,” Gennarini pointed out.

“This is because the Trump administration is making it harder for countries to build support for abortion internationally. They are even having to defend the euphemism ‘sexual and reproductive health’ in UN policy,” he said.

“If the statement had said anything explicit on abortion, they’d have possibly lost nearly half the countries supporting the statement,” he added.

Obianuju Ekeocha of Culture of Life Africa told LifeSiteNews the statement is “unconscionable.”

The collective nations show “a resounding lack of compassion and understanding for the situation of millions of people around the world who have directly or indirectly been affected by the COVID-19 pandemic” by prioritizing “sexual and reproductive health and rights agenda over the genuine needs of so many people during this period,” Ekeocha said.

“In most African countries, there are strict restrictions of movement, so as a result, many communities are unable to have access to the most basic human needs such as food, water and medicines,” she pointed out.

“In truth, there is a state of high alert across the continent of Africa because we know that this pandemic could be devastating, given the glaring limitations in our systems, yet this group of countries release a shamefully out-of-touch and thinly veiled ideological statement that promotes the SRHR agenda,” she added.

She was “glad to see” only seven of 54 African countries had signed the statement, but “on the other hand, I am stunned that any African country, given the current precarious situation,” supported it, Ekeocha said.

“Our interest is in the protection of every human life and this pandemic hopefully should have taught us a valuable lesson — that every human life is precious and so should be protected at every stage and phase of development.”