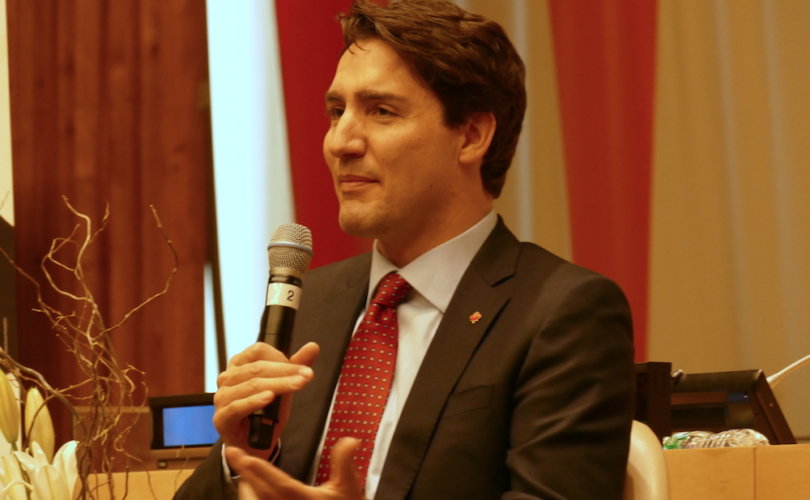 OTTAWA, Ontario, November 7, 2020 (LifeSiteNews) – Leaked documents show the Canadian Forces under the government of Prime Minister Justin Trudeau are looking at using the country’s military to create an organization to shape the “attitudes, beliefs and behaviours of audiences.”

In an October Ottawa Citizen report, the newspaper said it was able to obtain documents which they claim show a government plan on creating a new Defence Strategic Communication group.

The goal of the group would be to move forward “national interests by using defence activities to influence the attitudes, beliefs and behaviours of audiences.”

Target audiences for the new propaganda group would be Canadians as well as foreign nationals in places where the Canadian Forces operates.

John Carpay, president of the Justice Centre for Constitutional Freedoms, told LifeSiteNews that in a democracy such as Canada, the military’s purpose is to defend the country from threats, not to try and influence people’s opinion.

“The military has no business trying to influence public opinion in any way shape or form, and in fact, no government body does,” Carpay told LifeSiteNews.

“In a democracy, the purpose of the military is to defend the country from external threats and possibly, potentially from internal violent rebellion.”

As an example, Carpay said he believes the government's job is to protect “a person on a public sidewalk holding a sign expressing a public opinion” from “violence or threats.”

“In that instance, the government's job is to protect those individuals from violence or threats,” Carpay told LifeSiteNews.

According to the Citizen, some aspects of the documents – which are still in draft form – have already been carried out on the Canadian public.

The leaked documents obtained by the Ottawa Citizen come after an October report from the same newspaper which described how the Canadian Forces had spent over $1 million on “behaviour modification training” from the SCL Group, which is the parent firm of Cambridge Analytica.

In October, the Canadian Forces were compelled to publicly admit that they had already started propaganda initiatives on citizens. This came about after a letter sent to residents in the province of Nova Scotia warning them of a pack of wolves on the loose was deemed fake by the provincial government.

The “wolves” propaganda campaign was carried out by information warfare specialists from the Halifax Rifles reserve unit, who went as far as generating wolf sounds using speakers, along with forging the logo of the Wildlife Division of Nova Scotia’s Department of Lands and Forestry or their scheme.

The Nova Scotia government itself did not realize the military was behind the deception and had branded the letter as a fake. Ultimately the Canadian Forces announced they were behind the letter.

However, the Liberal government under Trudeau is denying such a plan is in play, despite the fact the “wolves” campaign points to the contrary.

The office of Defence Minister Harjit Sajjan told the Citizen that “No such plan has been approved, nor will it be,” regarding military propaganda campaigns.

Despite the Trudeau government’s denial, Emma Briant, a professor from Bard College, went as far to say that the Canadian military’s campaign was “way over the top.”

As for the government’s new propaganda initiative, according to the Citizen, the draft plan is also proposing to create a new way in which the military can research and analyze the social media accounts of the news media, industry, non-government organizations, and Canadians in general.

A Citizen report from July shows how a Canadian Forces intelligence unit was exposed to have been secretly collecting and monitoring citizens’ social media accounts in Ontario.

The unit had claimed that they had conducted the data mining to help troops deal with nursing home care during the coronavirus.

After concerned military personal contacted the Citizen about the data mining, the Canadian Forces admitted they were behind the operation, but claimed no laws were broken.

In another Citizen report from July, Canada’s top soldier, Chief of the Defence Staff Gen. Jon Vance ordered the stop of an information operations campaign which would have used propaganda aimed at “heading off civil disobedience by the public during the coronavirus pandemic.”

Vance called the document a “weaponization” of the military’s public affairs branch according to the Citizen.