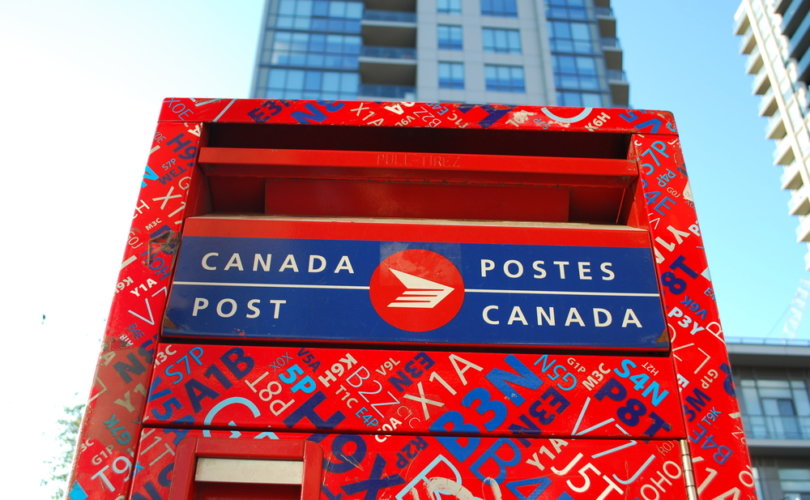 OTTAWA, Ontario, November 23, 2018 (LifeSiteNews) – Justin Trudeau’s Liberal government has ordered Canada Post to cease delivering a controversial publication that the government has deemed to be inconsistent with its “values and stance on inclusiveness and diversity.”

“After having carefully considered the recommendations of the independent board of review, I have decided to issue a final prohibitory order that will prevent the delivery of the publication Your Ward News, or any substantially similar material developed by its authors, through Canada Post’s unaddressed bulk mail,” said Carla Qualtrough, the minister responsible for Canada Post Corporation, in a Nov. 15 statement.

“My decision is consistent with the applicable legislation and the government’s values and stance on inclusiveness and diversity,” she added.

The minister based her decision on a Board of Review report which makes the case that Your Ward News has regularly published anti-Semitic, neo-Nazi material and so is tantamount to “hate propaganda.”

Billionaire George Soros, for example, is shown on the first page of Your Ward News' winter of 2017 issue with the Star of David superimposed on him, devil horns growing from his head and wearing robes with the number 666, the number of the beast from the Book of Revelation. In another issue, Your Ward News referred to Soros as a “Satanic Jewish billionaire.” The publication has also repeatedly denied the Holocaust, the systematic killing of an estimated six million Jews by Adolf Hitler's Nazi regime during World War II.

The decision to ban a publisher from sending material through Canada Post based on the publication's content, though, is worrying to political and religious groups who fear their own views could one day be deemed “hate” by a government in power with different values. They worry that they could be similarly excluded from a public forum.

“Of course, we all condemn hate speech towards Jews, or anybody for that matter, and if this (Your Ward News editor-in-chief James Sears) character publishes pro-Hitler and pro-Nazi propaganda, that’s absolutely revolting. His beliefs should be condemned,” said Jack Fonseca, a senior political strategist at Campaign Life Coalition, in an interview Wednesday. “Hitler was an evil, mass-murderer and we don’t want his National Socialist Party ideology taking root in Canada.”

Fonseca said that if this “new Canada Post policy was limited only and exclusively to pro-Nazi groups, that’d be one thing, but if the federal government agency has now been, or will be in the future, granted the power to remove the constitutional right to freedom of expression from any organization it deems to be a 'hate group,' that’s a concern to all pro-life and pro-family organizations in Canada.”

Prime Minister Justin Trudeau is an outspoken homosexual rights activist and a self-professed feminist who has banned any pro-lifers from running for the Liberal Party of Canada.

Under Trudeau's leadership, the Canada Summer Jobs Grant program has been tweaked to now include a values attestation all employers must sign before they can get any federal money to employ summer students. That attestation is a statement of support for such things as abortion, transgenderism, and homosexuality.

“How do you prevent the federal government from targeting Christian, pro-life, or pro-family organizations for censorship, especially given Justin Trudeau’s anti-Christian bias?” wonders Fonseca.

Organizations like Campaign Life Coalition, which rely heavily on newsletters mailed out to supporters to raise money, could suffer great financial hardship should Ottawa decide to prevent them from using Canada Post's services, said Fonseca.

“That’s not an unreasonable fear when you consider that Trudeau has already denied socially-conservative organizations, businesses, and even churches, access to the Canada Summer Jobs federal funding program,” he said. “I have no doubt that Trudeau would relish having Campaign Life denied access to postal services. I don’t even doubt his office might suggest it to them.”

The political strategist views the new power given to Canada Post to restrict some Canadians from using the mail to spread their views as a possible threat to pro-life organizations. That fear is being fueled by the establishment of the Canadian Anti-Hate Network last summer that could be used as a source for a government to label an organization as a “hate group.”

“Peering a short distance into the future, we could envision a realistic situation where the Canadian Anti-Hate Network, this liberal-partisan, faux human rights group adds Campaign Life Coalition and other groups, like Real Women of Canada for example, to its list of 'hate groups' in Canada. It’s probably just a matter of time.”

Fonseca noted that groups such as this often “smear conservative and pro-family organizations that believe in natural marriage between a man and a woman, who believe in the right to life for preborn children, and who oppose radical LGBT ideology including transgender ideology.”

According to Fonseca, any designation by the Canadian Anti-Hate Network of pro-life organizations as “hate groups” would give Ottawa the ammunition to justify banning them from using the mail.

“I don’t believe it’s a matter of 'if,' but 'when.'  They’ll just lump us or similar socially-conservative groups in with neo-Nazis and the Klu Klux Klan, neither of which really exist in Canada in any meaningful numbers, and really are a tiny fringe,” said Fonseca. “In fact, I’m sure liberal elites in Canada are already licking their lips at the prospect of being able to come after groups that espouse Judeo-Christian moral values on human sexuality.”