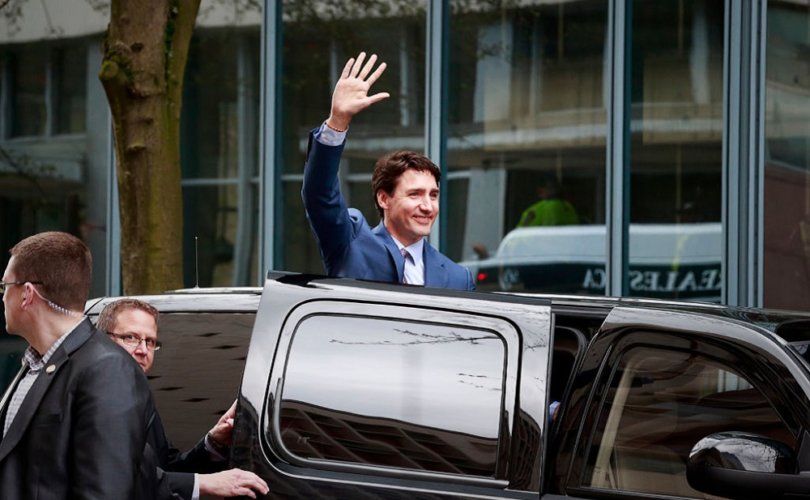 OTTAWA, Ontario, October 2, 2020 (LifeSiteNews) — Justin Trudeau’s Liberal government reintroduced a bill Thursday making it a crime punishable by five years in jail to help minors overcome same-sex attraction or gender confusion, or to remove them from Canada to seek such help.

It’s identical to the controversial C-8, which died when Trudeau prorogued Parliament in August in the wake of the WE Charity funding scandal.

The bill defines “conversion therapy” as any “practice, treatment or service designed to change a person’s sexual orientation to heterosexual or gender identity to cisgender, or to repress or reduce non-heterosexual attraction or sexual behaviour.”

“Cisgender” is a term LGBT activists use to describe people who acknowledge and accept their biological sex. It’s opposite — for people who deny their sex and insist on a different one — is “transgender.”

It adds: “For greater certainty, this definition does not include a practice, treatment or service that relates to a person’s gender transition; or to a person’s exploration of their identity or to its development.”

“These amendments are the same as those proposed by Bill C-8 in the previous parliamentary session,” according to a Liberal press statement.

“If passed, this bill will make Canada’s laws on conversion therapy the most progressive and comprehensive in the world.”

The government appears to be downplaying the scope and breadth of the legislation.

The Liberals haven’t made it a crime for Canadians to express their views on homosexuality or transgenderism, Lametti told reporters, as reported by CTV News.

“The bill does not put an end to conversations youth and individuals may have with supportive adults and professionals in their lives in assisting them in exploring their identity. These discussions are often critical to personal development,” he added.

“Nor would the proposed offences criminalize conversations where personal points of view on sexual orientation or gender identity are expressed.”

But Jack Fonseca, director of political operations for Campaign Life Coalition, warned concerned Canadians to pay no heed to these words. Rather, they should look at the text of the bill itself.

The Liberals’ assurance that the bill won’t apply to teachers, counselors, faith leaders, doctors, mental health professionals, friends, or family members who “provide support to persons questioning their sexual orientation, sexual feelings or gender identity” is misleading to the point of mendacity, he said.

“This is an exercise in smoke and mirrors to pre-empt a massive uprising by parents and spiritual leaders across the country,” Fonseca told LifeSiteNews.

“There are no protections whatsoever in Bill C-6 for parents or pastors who, for example, discourage a gender-confused child from identifying as transgender and try to help them be at peace with the body in which they were born,” he said.

If C-6 is passed, “loving moms and dads will end up in prison,” and it will be “illegal for the Church to carry out its sacred mission of evangelizing sinners and calling them to conversion in Christ,” he warned.

Gwen Landolt of REAL Women slammed Bill C-6 as “disgraceful” and agreed that it provides no protection to parents, pastors, or counselors who during a discussion oppose a gender “transition” or will to affirm their homosexuality.

“The whole thing is truly a wicked piece of legislation based only on ideology and the Liberals trying to promote themselves with the LGBTQ community,” she told LifeSiteNews.

“It’s fundamentally an attack on the integrity of the human being,” added Landolt.

“Someone who is 16, 15, 14, they need to be helped, not channelled” into accepting homosexuality or transgenderism.

Moreover, the Liberals are “trying to make conversion therapy a terrible, disgusting thing, but it’s not what they’re pretending,” she said.

That was echoed by Fonseca, who noted that “what’s disingenuously being labelled as ‘conversion therapy’” is “really just pastoral counselling or traditional psychotherapy.”

Conservative Party leader Erin O’Toole said he supports a ban on conversion therapy but fears that Bill C-6 will criminalize discussions around same-sex inclinations or gender confusion between minors and their parents, pastors, counselors, and teachers.

The Conservatives will be discussing possible amendments to the bill at an upcoming caucus meeting, reported the Toronto Star.

Both REAL Women and Campaign Life emphasize that the bill is irredeemable and must be scrapped. Fonseca urged pro-family Canadians to mobilize to defeat the bill.

“I say to every parent, priest, pastor and conscientious therapist across this country: you need to rise up now, en masse, while you still can, and flood your Member of Parliament’s office with opposition to Bill C-6, by phone, email, twitter, mail and in-person.”