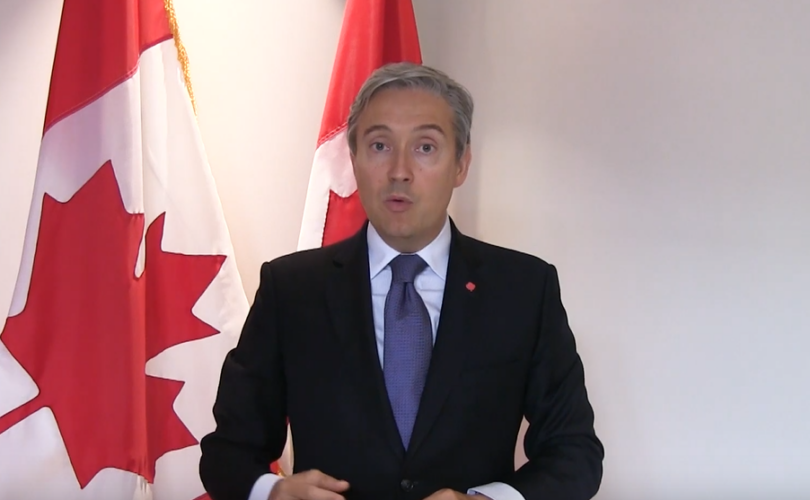 Canada’s Minister of Innovation, Science and Industry François-Philippe Champagne made the announcement Wednesday, while explaining that the First Movers Coalition (FMC) – which is listed on the WEF’s website – is a “global initiative [that] uses the purchasing power of businesses worldwide to decarbonize high-emitting industries.”

The FMC was launched in 2021 by Biden at that year’s United Nations Climate Change Conference, held in Glasgow, Scotland.

The coalition is made up of 69 green technology advocates from top companies around the world.

“Reducing emissions to net-zero by 2050 is possible if the right technologies are brought to commercial scale within the next decade,” reads the FMC website.

According to Champagne, “Canada’s participation in the First Movers Coalition reflects our government’s commitment to support industrial decarbonization.”

“A net-zero carbon emissions world is only attainable if we bring key technologies to commercial scale,” added the politician.

The decision by Prime Minister Justin Trudeau’s government to join a WEF-linked cause comes with little surprise to many Canadians, as his government’s affiliation with the group behind the infamous “Great Reset” agenda has been well-documented.

In fact, Trudeau’s deputy prime minister and finance minister, Chrystia Freeland, is currently in Davos, Switzerland, attending the WEF’s annual meeting, which started on January 16 and concludes on the 23.

The Davos summit thus far has seen the woke agenda on full display, with many world leaders pushing climate alarmism, abortion and the LGBT agenda.

Canada’s announcement to join the FMC follows Canadian Natural Resources Minister Jonathan Wilkinson’s recent statement that the federal government will be moving ahead with its “just transition” legislation.

The so-called “just transition” legislation will be designed to force workers in the oil and gas sector to transition to “green” jobs, an idea that has been slammed by the premiers of Alberta and Saskatchewan, whose economies both heavily rely on natural resources.

Earlier this month, Biden, along with Trudeau and Mexican President Andrés Manuel López Obrador signed a declaration committing their nations to continue pushing radical left-wing agendas, including so-called “racial justice,” expansion of the “LGBTQI+” agenda, and  “green” tech as a means of fighting “climate change.”

Both of these new initiatives seem to align perfectly with the Trudeau government’s current environmental goals – which are in lockstep with the United Nations’ “2030 Agenda for Sustainable Development” – that already include phasing out coal-fired power plants, reducing fertilizer usage, and curbing natural gas use over the coming decades.

Critics however, have sounded the alarm over the Trudeau government’s involvement in the WEF and other globalist groups, pointing to the socialist nature of the “Great Reset” agenda and its similarities to Communist China’s totalitarian Social Credit System.