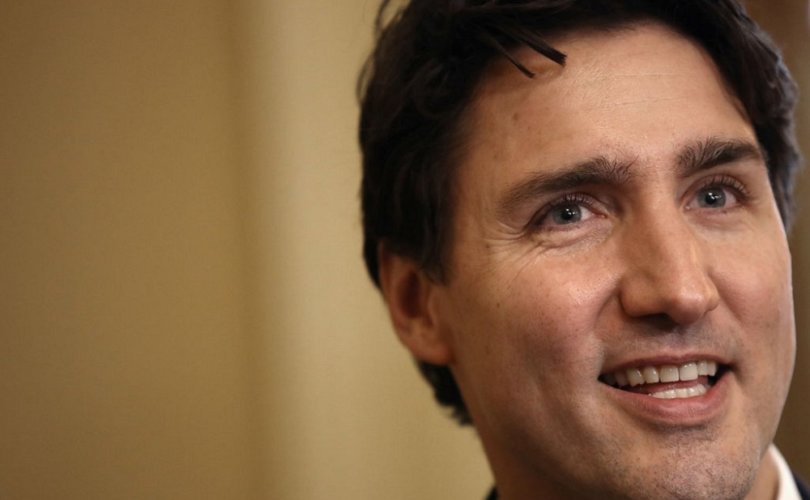 “This pandemic has provided an opportunity for a reset. This is our chance to accelerate our pre-pandemic efforts to reimagine economic systems that actually address global challenges like extreme poverty, inequality and climate change,” declared Trudeau.

— Article continues below Petition —
PETITION: Urge the RCMP to launch independent investigation into the WE Charity contract deal
Show Petition Text
6901 have signed the petition.
Let's get to 7500!
Thank you for signing this petition!
Add your signature:
Show Petition Text

Critics — notably Archbishop Carlo Maria Viganò — are warning that the proposed Great Reset is, in fact, a plan by billionaire elites to implement a globalist socialist surveillance state.

While Trudeau’s comments date back to late September, they have come under recent scrutiny as pandemic lockdowns continue and world leaders increasingly use “Great Reset” talking points, as Ezra Levant of Rebel News noted in a Sunday tweet:

I thought this was supposed to be a conspiracy theory. But here it is, straight from Trudeau’s mouth. The pandemic is the excuse for a “Great Reset” of the world, led by the UN.  pic.twitter.com/ybugYfjhAq

Trudeau made the statements during a September 29 video conference where he, United Nations secretary general António Guterres, and Jamaica’s Prime Minister Andrew Holness announced the convening of a “high-level” meeting to discuss how world leaders “could build a better, more equitable system that works for everyone” in the wake of the pandemic.

“The last six months have laid bare fundamental gaps and inequities within our societies and between them. As with climate change, those who have the least are impacted the most,” he said.

Trudeau also laid out a timeline for the proposed reset.

Following other “high-level meetings” in the summer and September, world leaders will meet again in December “to discuss the progress we’ve made, because we understand that right now, we have to fix urgent problems, and in the long run, we also have to fix the system, so that it works for everyone,” said the prime minister.

Meanwhile, the “most promising ideas will be taken up within existing IMF and World Bank processes, as well as at the G7 and G20 Leaders’ Summits later in the fall,” added Trudeau.

He also reiterated that a COVID-19 vaccine is needed, evidently a necessary condition for the proposed Great Reset, and announced that Canada is contributing $400 million to the COVID-19 vaccine Global Access Facility, or Covax.

That’s the World Economic Forum–led plan to be carried out by the United Nations and the World Health Organization (WHO) to circulate two billion COVID-19 vaccine doses by 2021.

U.S. president Donald Trump announced earlier in September that the U.S. would not be joining the approximately 170 countries participating in Covax, in part because the WHO is involved, the Washington Post reported at the time.

“To eliminate this virus anywhere, we need to eliminate it everywhere,” said Trudeau.

“While the scientists work around the clock to develop a vaccine, governments … have the responsibility to ensure it’ll be distributed quickly and fairly around the world,” he added.

“We need to work together, not just on vaccines. Canada believes that a strong, coordinated response across the world and across sectors is essential.”

Then there’s climate change, which, Trudeau contended in a video address to the U.N. the same day, is a greater threat to the world than the pandemic.

“Our world is facing a climate reckoning,” he said.

“We are at this point because of our collective inability over the past decade to make the tough decisions and sacrifices needed to fight climate change and save future generations,” said Trudeau.

“Let’s look at what we can do to make a difference together. Let’s use our shared power not just to get a vaccine, but to get it out to everyone,” he added.

“Let us be inspired by our citizens’ call to restore the global economy while we tackle climate change.”

Trudeau’s remarks echo those of Democrat former vice president Joe Biden and U.K. prime minister Boris Johnson, who also insist on the need for a “reset” to address global income inequality and climate change and to “build back better” after the pandemic.

Trudeau’s comments also take on significance in light of American pharmaceutical giant Pfizer’s recently announcing that it has developed a vaccine that is 90 percent effective against COVID-19.

Trudeau described this as “encouraging” and said “we see the light at the end of the tunnel.” Canada has secured 20 million doses of the Pfizer vaccine should it eventually become available.

However, just days later, reports emerged about “severe” side-effects volunteers for the vaccine trial experienced, including fevers and headaches.

The Medicines and Healthcare Products Regulator Agency (MHRA) put out a contract offer October 23, 2020, he reported.

It “urgently seeks an Artificial Intelligence (AI) software tool to process the expected high volume of Covid-19 vaccine adverse drug reaction and ensure that no details from the ADRs’ reaction text are missed.”

As for the Covax initiative, it is “a global risk-sharing mechanism for pooled procurement and equitable distribution of eventual COVID-19 vaccines,” according to GAVI, the World Vaccine Alliance.

GAVI is co-leading the Covax along with Coalition for Epidemic Preparedness Innovations (CEPI), a global partnership to develop vaccines to stop future epidemics.

Both GAVI and CEPI were launched at Schwab’s World Economic Forum meetings in Davos in 2000 and 2017, respectively.

The World Economic Forum and the U.N.’s Guterres signed a Strategic Partnership Framework in June 2019 to accelerate the implementation of the 2030 Agenda for Sustainable Development.

Readers in Canada are encouraged to contact their MP. They can find their MP HERE, and can establish a contact by clicking on the name. A similar list with contact information has been provided by Campaign Life Coalition.