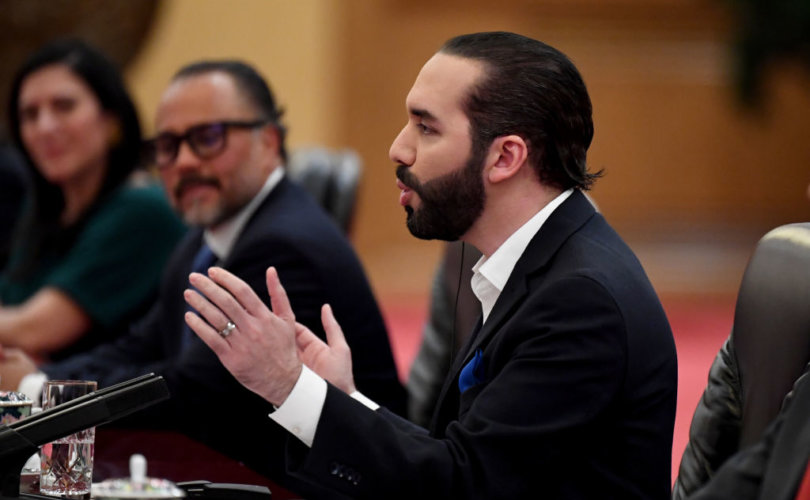 SAN SALVADOR, El Salvador (LifeSiteNews) — The president of El Salvador has tweeted that the Canadian government has “zero credibility” when it comes to “giv[ing] lessons to other countries about democracy and freedom.” His comments came after Trudeau’s invocation of the Emergencies Act against the freedom convoy in Canada.

During a Monday press conference in Ottawa, Canada’s Minister of Finance Chrystia Freeland explained some of the consequences of Justin Trudeau’s unprecedented invocation of the Emergencies Act.

Bukele tweeted a clip of the press conference where Freeland explains that Canada was “broadening the scope of Canada’s anti-money laundering and terrorist financing rules” to include truckers and Canadians who support the freedom convoy in Ottawa, as a way to thwart their efforts to get their freedom back.

“Are these the people who give lessons to other countries about democracy and freedom?” asked Bukele in his tweet.

Are these the people who like to give lessons to other countries about democracy and freedom?

This is one of the top ranking countries in the “democracy index”?

Your credibility on these topics is now worth 0.pic.twitter.com/wCjh9bXwDt

The 40-year-old Salvadoran president went on to argue that the credibility of Trudeau’s government on the topics of freedom and democracy “is now worth [zero].”

Bukele was elected president of El Salvador in 2019. His grandparents were Palestinian Christians from Jerusalem and Bethlehem of both Catholic and Orthodox affiliation. His father later converted to Islam and became an imam, and his wife has Jewish roots.

According the Times of Israel, Bukele is “not very religious but says he believes in Jesus.”

Politically, Bukele is notorious for his adherence to traditional family values, and his opposition to both abortion and same-sex “marriage.”