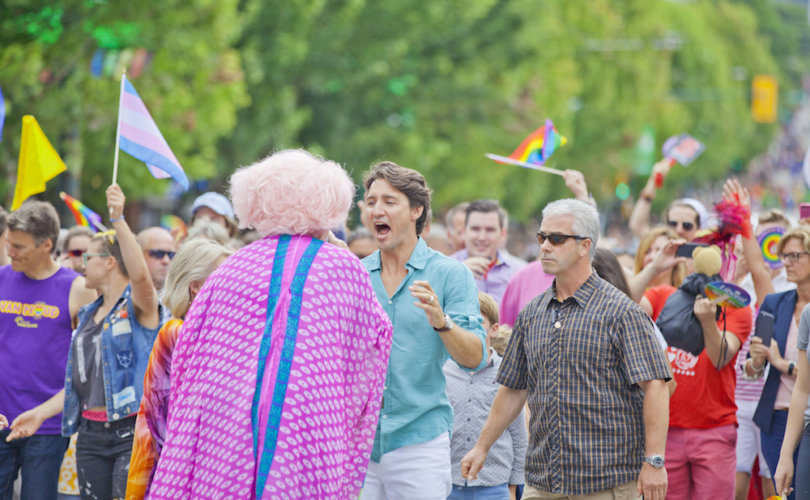 Prime Minister Justin Trudeau made the promise when delivering a long-anticipated apology to “LGBTQ2” individuals in the House of Commons on Tuesday.

“We will ensure there are systems in place so these kinds of hateful practices are a thing of the past. Discrimination and oppression of LGBTQ2 Canadians will not be tolerated,” the prime minister said.

Such discrimination “is not a moment in time, but an ongoing centuries-old campaign,” he said.

But Gwen Landolt, lawyer and vice president of REAL Women of Canada, warns that religious freedom is under threat in Trudeau’s Canada.

“According to the Supreme Court, there’s no hierarchy of rights,” she told LifeSiteNews.

“Trudeau, however, is making homosexual rights the supreme right. Those who don't believe in LGBTQ equality will be denigrated.”

Trudeau wiped his eyes several times, as did other MPs, as he apologized for the Canadian government’s past “oppression of the lesbian, gay, bisexual, transgender, queer, and two-spirit communities.”

The wide-ranging and emotional apology prompted standing ovations from MPs and those in the public gallery, packed with LGBTQ2 persons. Trudeau’s eldest son Xavier and daughter Ella-Grace were also in the gallery.

“On behalf of the government, Parliament, and the people of Canada, we were wrong. We are sorry. We will never let this happen again,” he said, as all present leapt to their feet, cheering and clapping.

“Canada gets a little bit stronger every day that we choose to embrace, and to celebrate, who we are in all our uniqueness,” Trudeau said.

Trudeau apologized to those discharged from the military or fired from civil service because of their sexual orientation during what has been dubbed a government “purge” that ended in 1992.

He also announced the Liberals had reached an “agreement in principle” over the weekend on the class action lawsuit launched on behalf those affected by the “purge,” which he described as a “witch hunt.”

The Liberals settlement of $145 million on the lawsuit brought by Toronto LGBTQ activist lawyer Douglas Elliott is “unprecedented” and the “largest of its kind in the world,” reported the Toronto Star.

The sum includes $110 million for compensation and legal fees for LGBTQ persons fired from the civil service or kicked out of the military, Elliott told the Star.

Each eligible person will receive $5,000 and can apply for up to $150,000 in compensation depending on circumstances. A further $15 million has been earmarked for “reconciliation and memorialization” of the “purge,” he said.

The Liberals introduced a bill Tuesday that will expunge and destroy criminal records of those “previously convicted of consensual sexual activity with same sex partners,” he said.

Moreover, the bill repealing Section 159 of the Criminal Code is “working its way” through the House, Trudeau noted.

Trudeau also vowed Canada “will stand tall on the international stage as we proudly advocate for equal rights for LGBTQ2 communities around the world.”

“Too often and in too many cases around the world we have seen the terrible consequences of overreaching governments,” he said.

Scheer urged Canada to defend the LGBTQ community in countries “in places like Iran, Russia, and other countries where it is the target of brutal violence,” noting “the work done by the previous government to prioritize these and other refugee groups who are particularly vulnerable.”

But Trudeau’s apology and its enthusiastic reception in the House and media has some worried what place remains in Canada for those whose faith teaches homosexual acts are immoral, and that God created man as “male and female.”

Indeed, Trudeau characterized the French and English Christians who settled the country he now governs as homophobes with “rigid gender norms.”

“Since arriving on these shores, settlers to this land brought with them foreign standards of right and wrong, of acceptable and unacceptable behaviour, and of suitable and unsuitable partnerships,” he told the House.

“They brought rigid gender norms, norms that manifested in homophobia and transphobia, norms that saw the near-destruction of indigenous LGBTQ and two-spirit identities.”

Landolt says fears religious freedom is under threat are valid.

“Those with many differing faiths, whether Christian, Muslim, Sikh, or Orthodox Jew, are being totally ignored by Trudeau and his government,” she told LifeSiteNews.

Landolt blasted Trudeau as “a pawn of the LGBTQ community” and decried “his tear-stained apology” as a “fraud, because no one is speaking about the dangers of homosexuality. There’s a deception as to what homosexuality is about.”

“Trudeau apparently doesn’t understand that the purpose of the law setting the age of consent at 18 was to protect adolescents. He will be removing that protection,” she said.

Ironically, Trudeau began his apology by declaring that the “number one job of any government is to keep its citizens safe, and on this we have failed LGBTQ2 communities and individuals time and time again.”

Landolt described the apology as “unreasonable and unjustified.”

“Homosexuality was prohibited under the Criminal Code until Pierre Elliott Trudeau decriminalized it in 1969 for consenting adults over 21 years of age, (later reduced to 18 years of age),” she said in a press release.

“This prohibition was in accordance with the social and cultural values of the time.”

LGBTQ individuals were dismissed from public service or the military because “they could be the subject of blackmail if their sexual orientation was publicly disclosed,” wrote Landolt.

“One may not agree with the past law prohibiting homosexuality, but such action by the government was distinguishable from the genuine discrimination experienced by others.”