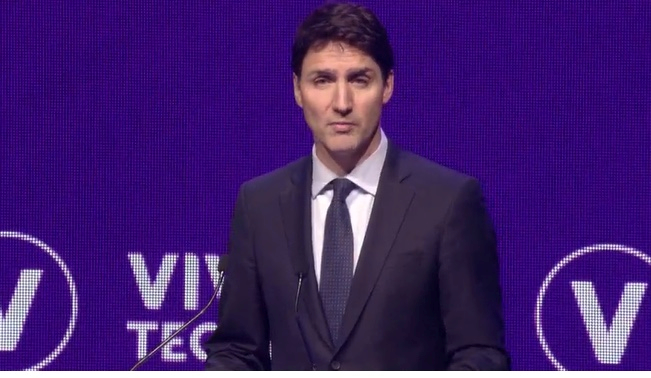 Trudeau first announced the charter last week at the Viva Technology conference in Paris, declaring that social platforms were “failing their users,” and needed to “step up in a major way to counter disinformation” or face “meaningful financial consequences,” Reuters reported.

While in Paris, Trudeau also signed on to the “Christchurch Call” in which governments and tech company CEOs pledged “to take action against violent terrorist and extremist content online,” according to Reuters.

The name references the terrorist attack in Christchurch, New Zealand in which a solo gunman killed 51 people in two mosques while live-streaming the massacre on Facebook.

“Social media platforms must be held accountable for the hate speech & disinformation we see online – and if they don’t step up, there will be consequences. We launched Canada's new Digital Charter today to guide our decisions, learn more about it here: https://bit.ly/2YGiTuu

Social media platforms must be held accountable for the hate speech & disinformation we see online – and if they don’t step up, there will be consequences. We launched Canada's new Digital Charter today to guide our decisions, learn more about it here: https://t.co/SH7mpyojsj pic.twitter.com/V2C0TmR49b

The charter also promises to safeguard elections from foreign interference and protect Canadians’ online privacy, and Bains said the Liberals will be undertaking a sweeping review of federal privacy laws, Canadian Press reported.

But social conservative groups worry they will fall afoul of the Liberals’ new policy.

“We have good reason to fear that this move will negatively impact our ability to communicate the pro-life and pro-family position, often baselessly characterized as ‘hateful,’” he told LifeSiteNews.

“But even more fundamentally, free speech is necessary for the pursuit of truth,” added Gunnarson.

That was echoed by Gwen Landolt of REAL Women of Canada.

“It’s a very dangerous undertaking by Mr. Trudeau,” she told LifeSiteNews. “He lacks understanding of the law and specifically of ‘hate.’”

Indeed, the essential difficulty with such a charter is “who defines ‘hate,’” Landolt said.

In Canada, the definition of hate is “very uncertain” and in some instances, appears to be based on “the effect” an expressed opinion “has on others,” she said.

For example, the Supreme Court of Canada ruled in 2013 that Christian activist Bill Whatcott’s flyers decrying homosexuality were “hate speech.”

Moreover, major platforms such as Google, Facebook and Twitter have already demonstrated a bias against conservative views, Landolt told LifeSiteNews.

In October, Twitter and WordPress included “misgendering” and “dead-naming” (referring to a transgender person by his or her birth name) as violations of their terms of service.

Landolt also blasted the Liberals for consulting so few Canadians on their digital charter.

The ministry held “30 roundtable discussions hosted by Six Digital Innovation Leaders across the country, engaging with more than 550 Canadians” between June and October last year, and “1,900 Canadians shared ideas” for the charter, its announcement says.

Meanwhile, the House of Commons Justice Committee is continuing its hearings on online hate and expects to table its report before Parliament adjourns at the end of June.

If the Liberal digital charter “deals with online hate,” the committee will likely hear testimony on it, chairman and Liberal MP Anthony Housefather told LifeSiteNews.

Its final recommendations “could include intervention measures where the government legislates,” Housefather said.

“One of the possibilities” is to amend the Criminal Code so that provincial attorneys general are not required to authorize prosecutions under Sections 318, 319, 320, and 420, which deal with hate crimes, he told LifeSiteNews.

The controversial Section 13 defined a discriminatory practice as “any matter that is likely to expose a person or persons to hatred or contempt” if those affected were “identifiable on the basis of a prohibited ground of discrimination.” It was repealed in 2013.

“We may look at anything. We’re going to listen to the witnesses, so anything is potentially on the table,” Housefather said.

The 32 witnesses the committee heard from so far include Jay Cameron of the Justice Center for Constitutional Freedom, Andrew Bennett of the Cardus Religious Freedom Institute, transgender activist Morgane Oger, Egale Canada, the Canadian Civil Liberties Association, and the Canadian Anti-Hate Network.

The committee expects to hear from social media platforms such as Twitter, Google, and Facebook, Housefather said.