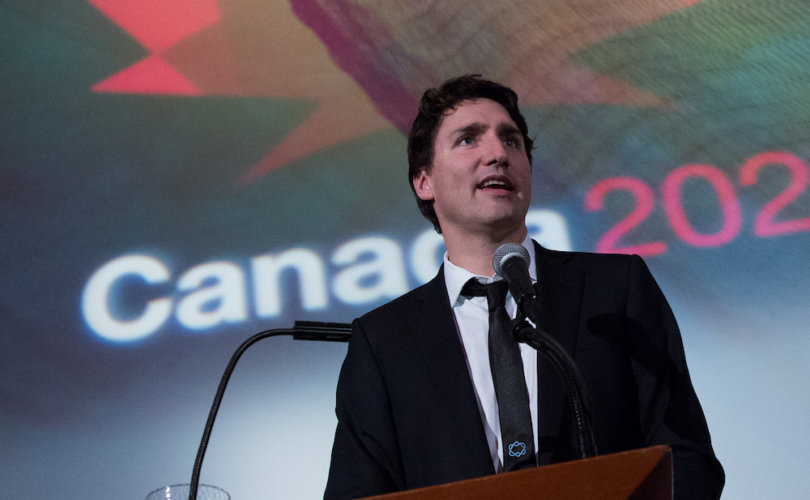 OTTAWA, May 17, 2016 (LifeSiteNews) — The Liberals introduced “transgender rights” legislation Tuesday — the International Day Against Homophobia, Transphobia and Biphobia — at the urging of Prime Minister Justin Trudeau.

If passed, Bill C-16 will make it illegal to bar a person from employment or to discriminate in the workplace based on gender identity or gender expression.

The legislation will also expand the Criminal Code’s hate speech laws to include gender identity and gender expression.

But Campaign Life Coalition project manager Jack Fonseca says the legislation is “not about preventing discrimination,” but “about empowering men, biological males, to enter into girls’ private spaces…washrooms, change rooms and showers,” on the pretext they are “female.”

Such incidents are well documented, Fonseca told LifeSiteNews, citing the notorious case of Christopher Hambrook, who was jailed indefinitely in 2014 as a dangerous offender.

In 2012, the then-35-year-old gained access to two Toronto women’s shelters in 2012 by claiming to be a transgendered woman, where, Fonseca said, he attempted to “rape and molest two vulnerable women.”

The Liberals’ Bill C-16 will give legal cover for further such incidents, he warned. “Essentially, it’s a very dangerous bill.”

Campaign Life Coalition has launched a petition calling on parliamentarians to vote against the bill. (Concerned citizens can sign it here.)

During a press conference held after she tabled the bill Tuesday morning, Justice Minister Jody-Wilson Raybould dodged the question of whether the Liberals will whip the vote on the bill.

NDP MP Randall Garrison, also at the press conference, said this was “the seventh time this bill has been introduced in the House of Commons,” but the “first time it’s been introduced by the government.”

READ: Sexual predator jailed after claiming to be ‘transgender’ to assault women in shelter

The House of Commons passed similar legislation twice before, he said, including his private member’s bill, Bill C-279.

But that bill died in the Senate after Tory Senator Don Plett introduced amendments essentially gutting it, including one barring transgendered persons from using public washrooms for their opposite biological sex.

Garrison asked the Liberals to “guarantee this will get through the Senate.”

Wilson-Raybould was surrounded by a group of transgendered persons at the press conference, including 10-year-old Charlie Lowthian-Rickert, a boy who identifies as a girl, and whose mother, Annie Lowthian, had lobbied for Bill C-279, arguing that her son had the right to access women’s bathrooms.

“Thank goodness this bill is passing,” Lowthian-Rickert told the press, “because it will protect us from…hateful propaganda, assaults…I feel much safer.”

Trudeau had asked the justice minister to give the legislation priority, the CBC reported, adding that prime minister announced the bill on Monday when in Montreal to receive the Laurent McCutcheon Award “for his commitment to fighting homophobia and transphobia.”

“As a society, we have taken many important steps toward recognizing and protecting the legal rights for the lesbian, gay, bisexual, transgender, queer-questioning or two-spirited community,” Trudeau noted in a written statement.

“There remains much to be done, though,” he added. “Far too many people still face harassment, discrimination and violence for being who they are. This is unacceptable.”

Fonseca, however, urged people not to be taken in by high-sounding Liberal “talking points” about alleged discrimination, but see the real consequences of the proposed legislation.

“This is really a lunatic bill, it’s political correctness gone mad,” he emphasized.

He urged people to lobby against the bill.

The “average Canadians need to stand up and say ‘No, this is wrong, we don’t want grown men in the bathrooms of our daughters and our wives’,” said Fonseca.

Women also “need to stand up and say, ‘We don’t want men in our private spaces. We have privacy and security rights’.”