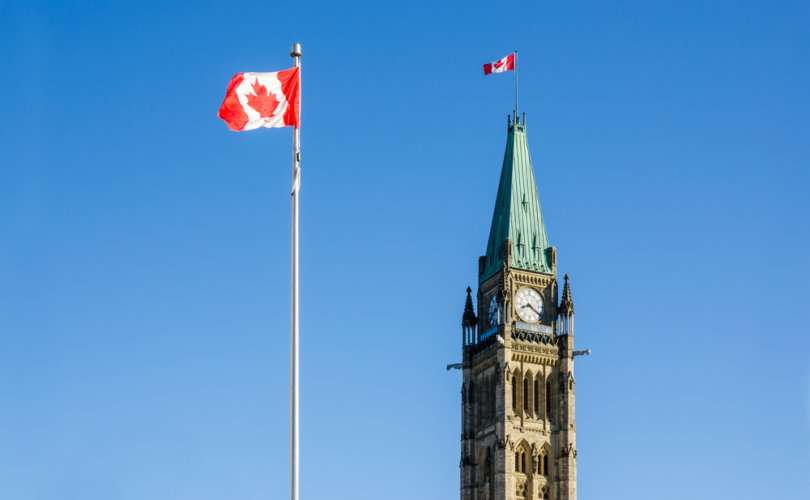 OTTAWA, June 7, 2016 (LifeSiteNews) – The Conservatives’ calls for a national consultation on the lyrics of the Canada’s anthem couldn’t stop the Liberal government from pushing a gender neutral version of O Canada one step closer to becoming law this week.

While the Conservatives complained that Bill C-210, an Act to Amend the National Anthem (gender), was another arbitrary change to Canadian tradition, like the government’s commitment to change the electoral system, being pushed without consulting Canadians, the Liberals justified the rush on the grounds that Mauril Belanger, the Liberal MP who sponsored Bill C-210, is dying of Lou Gehrig’s Disease.

The official English lyrics contain the lately contentious line, “True patriot love, in all thy sons command.” The proposed amendment would change that to “in all of us command.” The very different French words for the anthem written by Adolphe-Basile Routhier in 1880 were just as masculine and far more religious, but they have been “gender neutral” and practically secularized since 1980.

“In all of us command” is now being reported by news media such as Global and the CBC as O Canada’s original, gender neutral, words as written in 1908 by a Montreal lawyer and Quebec cabinet minister Robert Stanley Weir. He then revised them, in the CBC’s telling, to “in all thy sons command” at the time of the First World War, “presumably to honour men in the armed forces, according to The Canadian Encyclopedia.”

But this turns out to be doubly incorrect. The masculinized version first appeared in print in 1913, a year before Canada’s sons went off to fight, and 60,000 to die, in World War One. Moreover, the Canadian Encyclopedia doesn’t presume this was the reason at all, but states: “There is no evidence as to why the change to ‘sons’ was made.”

Nor was Weir’s original “In all of us command.” It was the more archaic, “In us thou dost command.” And his lyrics were far from the original English version. Several versions written by others had preceded it but were surpassed in popularity by Weir’s words by the outbreak of World War One. His version had become semi-officially accepted as the anthem long before a 1980 bill made it so. By then the French version had been cleansed of Routhier’s references to God, fathers, brothers, and Christ.

For Belanger – and all the Liberals ­– the English words speak of a primeval age when there were no women in cabinet nor even on the backbenches in Parliament. As he said when he introduced the bill last year (he is no longer capable of speech): “On the eve of the 150th anniversary of our federation, it is important that one of our most recognized and appreciated national symbols reflect the progress made by our country in terms of gender equality.”

In arguing for a delay after the bill passed second reading, Conservative MP Peter Van Loan told the Canadian Heritage Committee, where it went for a single day’s consideration, “It is tragic that … Canadians are being shut out. Their national anthem is being changed. They have been singing it for decades, millions of Canadians. It belongs to them. It is not a plaything of us.” Another Tory told the same committee that references to God would be the next to go.  The Conservatives wanted the committee to hold hearings across Canada on the change.

C.P. Champion, the editor of the Dorchester Review historical journal, suggested that the real reason the Liberals were in a rush and unwilling to consult was because they feared a backlash when Canadians found out. But Hedy Fry, the chair of the committee, said, “Canadians were well aware” of this issue. Meanwhile, Belanger was fading fast. “Obviously, everyone is very concerned that this finishes because Mr. Belanger is getting sicker and sicker,” Fry said.

With their majority in the committee, the Liberals sent the bill back to the House of Commons after a single day’s consideration without amendment. Third reading should come in a matter of months.

Global News’s online poll on the issue showed 85 percent of the 6,369 participants (by Monday afternoon) were opposed to changing O Canada.

The Conservative government had proposed amending O Canada to make it “gender neutral” in the 2010 Throne Speech but abandoned the project when it was met with hostility.