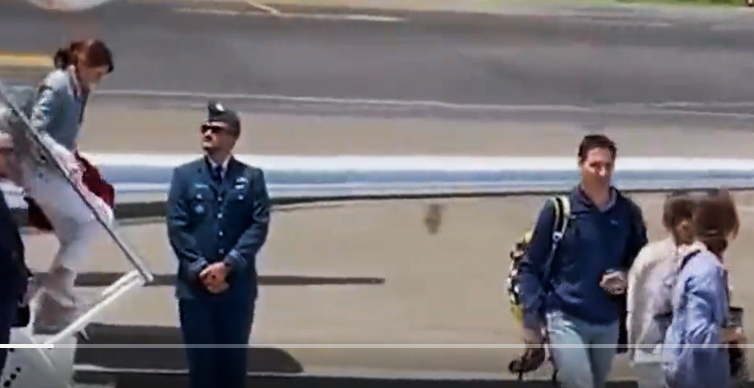 Canadian Prime Minister Justin Trudeau exits a plane on a family vacation in Costa Rica without wearing a mask.Twitter

(LifeSiteNews) – Canadian Prime Minister is getting criticized for taking a two-week trip to Costa Rica with his family while apparently not wearing masks aboard a taxpayer-funded Royal Canadian Air Force (RCAF) plane.

Last week, a video surfaced online of Trudeau and his family’s arrival in Costa Rica, where they can be seen disembarking the RCAF plane mask-less. It should be noted that it is not known whether they were wearing masks on the plane.

The video has gone viral with over 3.3 million views.

As it stands now, Canadian rules from Transport Canada states that “all passengers (on planes) must wear a mask throughout their entire journey except for brief periods while eating, drinking, or taking oral medication, or unless otherwise exempt.”

According to the government, mask rules apply while boarding a plane, while in flight, and while deplaning.

“Travelers who refuse to wear a mask when directed could face fines,” the government says.

On June 20, Trudeau “suspended” the COVID travel vaccine mandates. However, those without the jabs still must quarantine for two weeks upon return home.

Also still in place is a mandate that all passengers on any Canadian aircraft wear masks while the plane is flying in Canadian airspace.

After the video of Trudeau and his family went viral, many were quick to blast his apparent hypocrisy.

“Justin Trudeau just landed in Costa Rica with private jet, wearing no mask. Climate change is for Canadian peasants, not for him,” tweeted Dr. Eli David.

David then referred to George Orwell’s Animal Farm, writing about Trudeau, “Masks are for Canadian peasants not for him. Everyone is equal. Some are more equal.”

Conservative Party of Canada MP and leadership frontrunner Pierre Poilievre this past Friday had this to say.

“Trudeau demands you still wear a mask on planes and trains. But on his private jet to a Costa Rican vacation, the masks come off,” Poilievre tweeted.

Conservative Party MP Melissa Lantsman tweeted Friday: “rules for thee, but not rule for me.”

“End the theatre for all Canadians.”

Brian Lilley, a columnist for the Toronto Sun, commented on Twitter how while it appears “Trudeau isn’t breaking any rules getting off a plane in Costa Rica because they don’t require masks,” it does show “he doesn’t believe his own bulls**t on masking and COVID rules because he doesn’t follow the rules he imposed on Canadians … ever.”

Also, Trudeau has been blasted for using a government jet while other world leaders, such as Mexico’s President Andrés Manuel López Obrador, famously stopped using the Presidential jet, and only flies on commercial aircraft in economy.

The Canadian Press claims that Canada’s Prime Minister must fly on a government RCAF jet for security reasons. However, it should be noted that even British Prime Minister Boris Johnson has flown on commercial planes for personal vacations.

Trudeau’s visit to Costa Rica comes at the same time its new president rescinded a COVID jab mandate for citizens.

His climate plan, which includes a punitive consumer carbon tax, has been blasted by Canada’s Western Premiers.