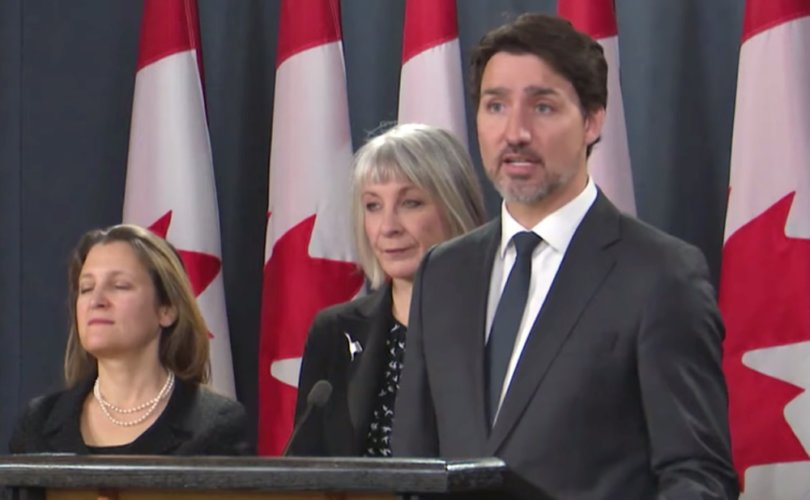 OTTAWA, Ontario, May 11, 2021 (LifeSiteNews) – Speaking in Canada’s House of Commons last week, Prime Minister Justin Trudeau said that those who criticize his government’s much-maligned internet regulation bill are nothing more than people who wear “tinfoil hats.”

Conservative Party of Canada (CPC) MP Michael Barrett had asked Trudeau if Bill C-10 was an attempt to silence Canadians online who use social media sites such as YouTube or Facebook to express their views.

“Will the Prime Minister tell us how long it will be before every aspect of Canadian life must conform to his Liberal vision of Canadian society?” Barrett asked.

To this, Trudeau replied with a dismissal of Barrett’s question.

“The tinfoil hats on the other side of the aisle are really quite spectacular,” Trudeau replied.

The original draft of Bill C-10 had an exemption clause called “Section 4.1” for “user content” posted on social media by individuals, meaning such posts would originally have not fallen under Canadian Radio-television and Telecommunications Commission’s (CRTC) regulations.

The CRTC is the federal body tasked with regulating TV and radio in Canada, but up until Bill C-10 has kept a hands-off approach to regulating the internet.

However, a recent amendment to Bill C-10 done through the Heritage Committee removed the “Section 4.1” provision, which in theory means the federal government would be able to regulate what people post online.

The legislation, if passed, would force companies such as YouTube, Twitter, or Instagram to remove content deemed “harmful” within 24 hours. In essence, it would let the CRTC regulate the internet along with social media in line with their regulations for broadcasting services.

Guilbeault recently struggled to give a clear answer to justify why a committee chaired by him moved to have personal social media posts placed under government oversight.

In an interview on the CBC show Power & Politics last Friday, Guilbeault claimed that his internet regulation Bill C-10 is about “ensuring that these platforms that act like broadcasters pay their fair share when it comes to Canadian culture … It's not about content moderation.”

Recently, former head of the CRTC Peter Menzies said, “Putting the CRTC in charge of the entire internet, I mean, that’s like putting a logging company in charge of the Great Bear Rainforest … it’s not going to end well.”

Yesterday, Poilievre blasted Guilbeault for spreading “misinformation” after he suggested in a recent interview with CTV's Evan Solomon that those with large social media followings could be subject to regulations under Bill C-10.

Guilbeault later clarified in a statement that he “should have been more precise” with his language, adding that large social media users will  “never be considered as broadcasters and will not be subject to the obligations or regulations within the Broadcasting Act.”

The Federal NDP Party said that they will be voting in favor of a motion that puts “Bill C-10 on hold while the Department of Justice conducts a new Charter compliance analysis and calls on the Minister to appear in committee.”

Yesterday, the Heritage Committee put a hold on Bill C-10 until the Department of Justice looks at it to determine whether or not the recent amendments violate one’s free speech with posts on social media.

Trudeau needs the support of the NDP to pass Bill C-10.