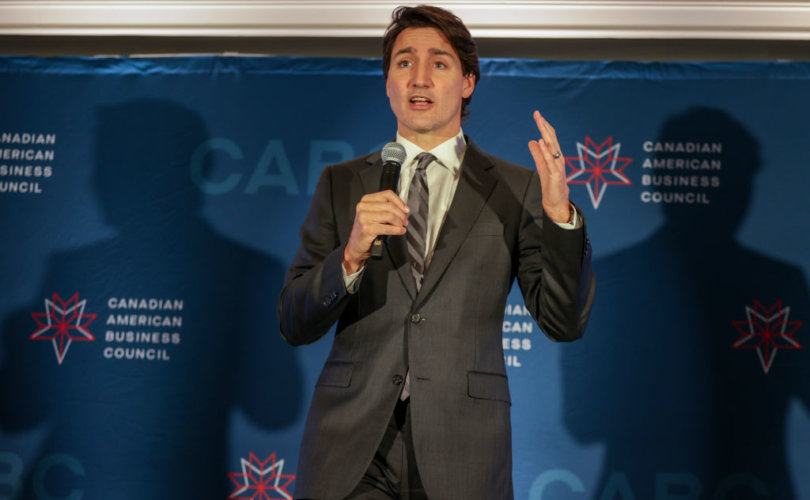 Trudeau wrote to Freeland in his “Deputy Prime Minister and Minister of Finance Mandate Letter” dated December 16 that she must “[i]ntroduce amendments to the Income Tax Act to make anti-abortion organizations that provide dishonest counselling to pregnant women about their rights and options ineligible for charitable status.”

Trudeau added that Freeland must also “expand the Medical Expense Tax Credit to include costs reimbursed to surrogate mothers for IVF expenses.”

“You will be supported in this work by the Minister for Women and Gender Equality and Youth,” added Trudeau.

Trudeau’s extreme attack on pro-life organizations that provide counseling to expecting mothers by going after the group’s tax charity status was part of the Liberal Party 2021 election platform, released in August.

The “Forward for Everyone” platform claimed that “anti-choice organizations are actively working to spread misinformation about abortion, putting the health and safety of young people and vulnerable women at risk.”

It promised, “A re-elected Liberal government will: No longer provide charity status to anti-abortion organizations (for example, Crisis Pregnancy Centres) that provide dishonest counseling to women about their rights and about the options available to them at all stages of the pregnancy.”

Pro-life group: Trudeau is ‘attacking the epitome of what is means to be charitable’

Jack Fonseca, Political Operations Director for Campaign Life Coalition (CLC) told LifeSiteNews that it is an act of cruelty “to the thousands of young Canadian women who benefit from pro-life crisis pregnancy centres” to try and shut them down.

“This is also discriminatory and unlawful in that it violates the constitutional guarantee of equality under the law. While Trudeau is moving to financially destroy pro-life charities, at the same time, he’s funneling tens of millions of tax dollars to activist groups that promote abortion,” said Fonseca.

Fonseca added that every Member of Parliament (MP), including the opposition Conservative Party MPs under Erin O’Toole, must “oppose” Trudeau’s attack of pro-life organizations, especially “if it comes to a vote in the House of Commons.”

“The snivelling coward, Erin O’Toole must not pull the same unanimous consent trick as he did on Bills C-3 and C-4, but rather, Conservatives must mount an aggressive opposition campaign against this attack on life-affirming Canadian charities,” Fonseca told LifeSiteNews.

CLC’s national president Jeff Gunnarson told LifeSiteNews that this latest move by Trudeau to go after pro-life organizations charity tax status is “another indication of the evil that runs through Trudeau’s veins.”

“He is attacking the epitome of what is means to be charitable,” said Gunnarson. “Crisis Pregnancy Centres (CPC) help tens of thousands of new moms and pregnant moms in crisis each year. They give of their donated resources and ask for nothing but the ability to offer their donors a charitable tax receipt. This self-proclaimed feminist is attacking mothers and babies at their most vulnerable stage in life. This man is sick and rotten to the core, he needs our prayers.”

Gunnarson added that what is needed now is an “uproar from the community.”

“Coupled with contacting your MP, everyone who supports the pro-life work of CPC’s should contact also their provincial MP, and their local city or town council. Ask them to write a letter to Trudeau and Minister Freeland in support of their local CPC,” Gunnarson said.

CLC blasted the Liberals’ new “Forward for Everyone” section on “reproductive rights,” when it was released, calling it an “attack on crisis pregnancy centres and organizations that support women.”

As a result, CLC has been working non-stop since Trudeau was re-elected on September 20 to rally all Canadians to demand that his government not remove charitable status from pregnancy centers.

On November 24, a large rally was held in Ottawa on Parliament Hill. In attendance were three pro-life CPC MPs Leslyn Lewis, Cathay Wagantall, and Arnold Viersen, who all vowed to defend pro-life pregnancy centers.

A CLC petition called “Save Canada’s crisis pregnancy centres” has 10,815 signatures at the time of writing.