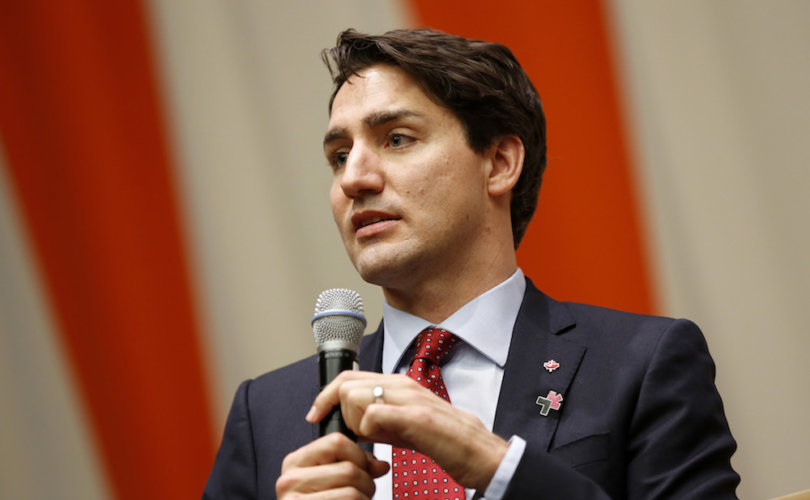 OTTAWA, April 20, 2016 (LifeSiteNews) — Prime Minister Justin Trudeau has defended his government’s draft bill on euthanasia and assisted suicide after some Liberal backbenchers complained it is more restrictive than the Supreme Court intended when it struck down the existing law against euthanasia and assisted suicide in its February 2015 Carter ruling.

Introduced April 14, Bill C-14 is intended to replace the current law by June 6, when the Carter ruling takes effect, but some Liberal MPs and senators have criticized it for not going far enough.

That includes Yasmin Ratansi, MP for the Toronto riding of Don Valley East, who told the Canadian Press Tuesday that her constituents favour a more wide-open euthanasia regime.

She said that of the approximately 200 people who attended a weekend town hall meeting for Don Valley East and West ridings, the majority were well-off seniors who had read up on the bill, and of these, 80 to 85 percent thought it was too restrictive.

“At the moment, they feel … that the bill has not met the benchmark” of the Supreme Court’s Carter decision, she told CP. “I don’t want people who are suffering to go to court and to (have to) challenge to get their rights.”

Trudeau, however, who will allow his backbenchers a free vote on the issue, said that legalizing assisted suicide and euthanasia is a “momentous” change which must be implemented with caution.

These are “very, very weighty questions,” the prime minister told reporters Tuesday, and he pointed out the government is up against the Court-imposed June 6 deadline.

“This is the first step, it’s a big one. Some people thought it should be bigger, I respect that.”

He added that he hoped MPs and senators would realize “how momentous this step is and take it one step at a time as we move forward in a responsible manner because this is one of those things you can’t undo,” CP reported.

Trudeau’s parliamentary secretary, Toronto MP Adam Vaughan, confirmed with CP that the government is open to MPs debating and proposing possible amendments to the bill.

Meanwhile, three senators who sat on the special joint parliamentary committee on euthanasia and assisted suicide, Liberals James Cowan and Serge Joyal and Conservative Nancy Ruth, have also criticized the bill as too restrictive and say they are willing to delay the bill past the June 6 deadline in order to try to amend it to their liking.

House Leader Dominic LeBlanc told CP that if any Senate amendments come after the House of Commons passes the bill, it could result in a protracted game of  “ping pong” between the two Parliamentary chambers.

Campaign Life Coalition vice president Jeff Gunnarson said that the Supreme Court’s Carter decision was a “bomb” and that CLC’s position is that the government must invoke the ‘notwithstanding clause,’ which will override the ruling for five years.

CLC cannot endorse any legislation that sanctions the intentional killing of human life, Gunnarson said. However, the debate and free vote on Bill C-14 in the House of Commons and Senate will reveal “who the Liberals of conscience are,” he told LifeSiteNews.

CLC is urging its supporters to ask their MPs to vote against Bill C-14, Gunnarson said.

The Supreme Court ruled in Carter that the law preventing competent adults who have a “grievous and irremediable medical condition that causes enduring and intolerable suffering” from seeking “physician-assisted dying” infringed their Charter Section 7 right to “life, liberty and security of persons.”

Bill C-14 restricts eligibility for assisted suicide and euthanasia to competent persons aged 18 and over who have an incurable serious illness or disability that causes them intolerable suffering, are in an advanced state of irreversible decline, and whose “natural death is reasonably foreseeable.”

The draft bill did not follow the joint parliamentary committee’s February 2016 report, which recommended euthanasia for mature minors, for mental illness alone, and that people with degenerative disorders such as dementia be allowed to issue advance directives to be euthanized at a future date.

However, neither did the Liberals rule out eventually allowing euthanasia under these circumstances.

Justice Minister Jody Wilson-Raybould, in introducing the bill, stated the government would be studying the parliamentary committee’s more contentious recommendations and would review the legislation in five years’ time.

Alex Schadenberg, executive director of the Euthanasia Prevention Coalition, has criticized the bill’s alleged safeguards as illusory. The two medical practitioners who approve a person for euthanasia or assisted suicide are also the ones who report on it after the person is killed, and they base their decision on eligibility on “opinion.”

The bill calls for a 15-day reflection period after a person is approved for euthanasia or assisted suicide, but this can be waived by the two medical practitioners, who can be physicians or nurse practitioners.

Moreover, Bill C-14 has no protection for the conscience rights of healthcare workers who object to cooperating in any way with euthanasia or assisted suicide, Schadenberg points out.