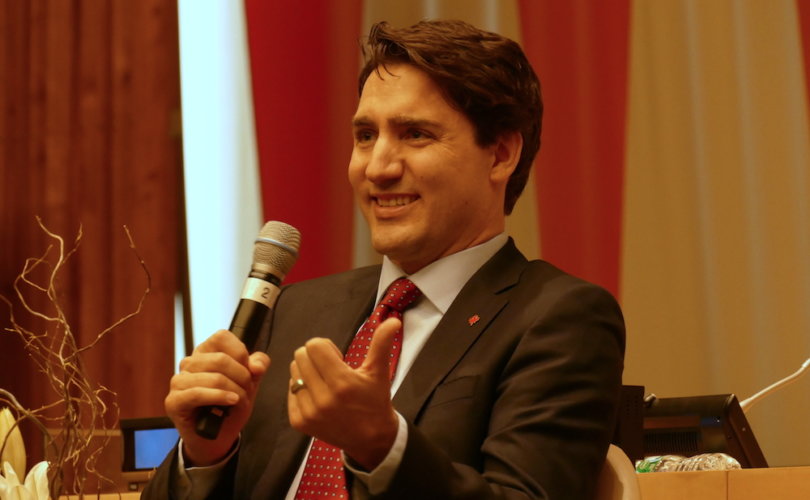 During one of his regular press conferences yesterday, Trudeau said that the Liberal party for “many months” had called for Sloan to be removed for his “unacceptable comments.”

“Political parties need to remain vigilant, particularly in the wake of what we’ve seen in the United States, from the infiltration of the active presence of fringe or extremist or violent or unacceptable or intolerant elements, and that’s something that we constantly need to work towards as all politicians in Canada,” said Trudeau.

“Which is incidentally why the Liberal party has been calling for Erin O’Toole to remove Derek Sloan from caucus for many, many months now, following a number of unacceptable comments that he has made. We are pleased that Erin O’Toole has finally decided to take leadership and we’ll see how that unfolds.”

On Monday, O’Toole announced he has “initiated the process” to remove Sloan from the caucus via the Reform Act, due to what he says was an acceptance of a $131 donation from a “well-known white supremacist,” named Paul Fromm to the Conservative Party of Canada in August 2020.

O’Toole’s statement came about after a recent Press Progress report that noted that an individual named Paul Fromm had donated a total of $131 to the CPC in August 2020.

The report noted that the CPC “confirmed to them” that it was directed to Sloan’s leadership campaign.  In the Press Progress report, O’Toole said he was “outraged” at the news of Fromm’s donation and promised an investigation into the matter.

Fromm, whose donation came under the alias Frederick P. Fromm, as Sloan says he discovered, is described as a white supremacist tied to the “neo-Nazi” label.

It was later in the day after the Press Progress report was published when O’Toole sent out his statement saying he had started the process to remove Sloan.

Sloan quickly fought back O’Toole’s claim that Fromm’s donation was somehow known to him. On Facebook Monday night, Sloan posted a video saying the CPC’s top brass “picked a fight with the wrong person.”

Sloan said that he intends to prosecute the matter further “in the court of public opinion and who knows what other types of situations as well.”

Sloan also posted a detailed statement, which was sent out late on Monday, where he noted that Fromm had used an alias when he donated, was a member of the CPC, and had voted in the leadership race.

“Using this obscure form of his identity, he donated $131 dollars, and 10% went to the party. His donation was processed without either my campaign or the CPC realizing who had made the donation, and the party accepted its 10% cut of the donation. I presume that the party kept its 10%,” said Sloan in his statement.

Elections Canada stipulates that the disclosure of a donor name is only required for contributions over $200, meaning that the only entities likely to have known about Fromm’s donation would be Sloan or the CPC.

The Reform Act was passed in 2015, and while technically it allows for MP’s to have a more free vote in the House of Commons, it states that to expel an MP from caucus at least 20 percent of the party members must first agree to trigger a review. A majority MP vote is then required to expel an MP from the caucus.

The CPC caucus is voting today whether to keep Sloan in or out of the party.

In April of 2020, Trudeau directly accused Sloan of “racism” because he questioned Canada’s top health officer’s ties to the World Health Organization and its relationship to the Communist Party of China.

In June, Sloan said that Trudeau was legislating “child abuse” with Bill C-8, which in the fall was reintroduced as Bill C-6, and which would prohibit parents from seeking to help their son or daughter overcome gender confusion. This prompted Trudeau’s office to call for this removal from the party.

During the CPC leadership campaign, Sloan was unafraid to assert his pro-life and pro-family views.

In June, during the English leaders' debate, he stated that his fellow candidates would “agree with him” that “it’s not right” that Canada has no laws governing abortion.

The CPC elected pro-abortion MP O’Toole, who professes to be Catholic, as the new leader of the party in August last year.  Sloan came in fourth place behind Leslyn Lewis and Peter MacKay.

Campaign Life Coalition (CLC) has asked its supporters to “flood” their Conservative MPs and party HQ with a demand that they vote no in removing Sloan from the party, and to “respectfully request that Erin O’Toole walk back this disgraceful attack on Sloan.”

They are also asking their members not to “quit” the CPC or the upcoming policy convention.

LifeSiteNews asked Jack Fonseca, Political Operations Director, for Campaign Life Coalition (CLC) for his take on the attack on Sloan. Fonseca responded by relaying LifeSiteNews to an email he sent out Tuesday.

“The pro-life, pro-family Sloan has been targeted by the socialist rag, Press Progress, an NDP-based website founded by the Broadbent Institute,” said Fonseca.

“The pro-Liberal, anti-Conservative mainstream media then pounced and demanded that O’Toole kick him out of caucus. Tragically, Erin O'Toole obliged and told the media he has initiated the process to try getting Sloan expelled from the Conservative caucus. If that vote is successful, Sloan would become an