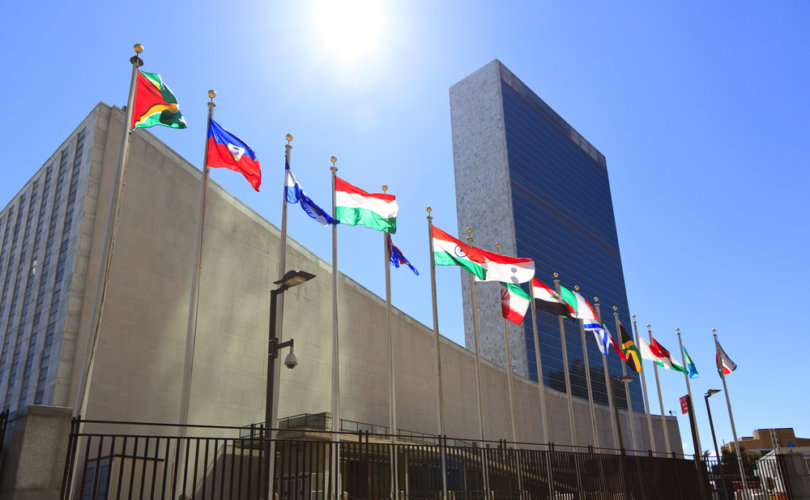 December 12, 2018 (LifeSiteNews) – 164 nations and the Vatican have signed onto an international agreement setting priorities for cooperation on immigration and refugee policy, despite language that hints at restricting freedom of the press, among other controversies.

Inspired by the rising tide of Middle Eastern migrants seeking asylum in Europe since 2015, the Global Compact for Safe, Orderly and Regular Migration purports to establish a “common understanding, shared responsibilities and unity of purpose” to guide countries’ immigration and asylum policies as well as coordinate international cooperation. Almost 85 percent of the United Nations' member states signed the pact Monday at a U.N. gathering in Marrakesh, Morocco, Global News reports.

One provision causing particular concern among critics is a bullet point under Objective 17 of the pact. It declares an intent to promote “quality reporting of media outlets” by means including “sensitizing and educating media professionals,” “investing in ethical reporting standards and advertising,” and “stopping allocation of public funding or material support to media outlets that systematically promote intolerance, xenophobia, racism and other forms of discrimination towards migrants.” At the end of the paragraph, it claims this would be done “ in full respect for the freedom of the media.”

“I’ve had serious conversations with colleagues about whether the federal government is going to allow me to continue using the term ‘illegal migrants’ in reference to the influx of people at Roxboro Road,” Global News Radio host Danielle Smith wrote about the language last week. “I love the way they throw that last part in — ‘in full respect for the freedom of the media’ — as if the entire paragraph preceding it didn’t just negate the notion of press freedom.”

The pact’s supporters have attempted to quell fears by stressing that it’s not legally binding, and simply expresses values countries should voluntarily work toward. But Pierre d’Argent, a law professor at Belgium’s Université Catholique de Louvain, warned that it could still be used as a tool for activists to push their agenda through the legal system.

“One can imagine that in some cases before international jurisdictions, lawyers use this pact as a reference tool to try to guide them,” d’Argent explained. “But it would simply be the use of this pact as an argument to give a definite meaning to the rules of law. This has already occurred in international or national jurisdictions to refer to instruments that are not legally binding.”

German law professor Matthias Herdegen agreed that the compact was in of a “legal gray area” and, even if not technically binding, would still have an impact by “giv[ing] the impression of [state] liability.”

“One of the things Canadians can be proud of is that we are showing leadership on one of the important issues around the world,” Prime Minister Justin Trudeau said of making Canada a signatory. “We are demonstrating that rigorous systems and an open policy actually leads to economic growth and economic advantages and stronger communities.” He denied that the agreement would sacrifice Canadian sovereignty.

The pact has received the Vatican's seal of approval as well, with the Vatican Secretary of State Cardinal Pietro Parolin declaring that it “affirms that migration should never be an act of desperation.”

“It is crucial to engage media at every level,” Parolin added. “Considering the essential connection between the Global Compact and the Sustainable Development Goals (SGDs), the awareness-raising activities should adopt an integrated approach so that migrant issues may be understood as an integral part of the SDGs.”

Not every nation is on board, however. Breitbart notes that the United States, Australia, Austria, the Czech Republic, Dominican Republic, Hungary, Latvia, Poland, Slovakia have all refused to sign it. Brazil's incoming foreign minister Ernesto Araujo announced the country will pull out in January; another seven countries including Israel remain undecided.

Critics also fear the document would force countries to give up their authority to set migrant policies that conflict with international sensibilities, despite many countries facing various societal and economic challenges caused by the sudden influx of large numbers of people without adequate security screening or measures to assimilate them into their new cultures. U.S. President Donald Trump declared last year that such issues “should not be governed by an international body unaccountable to our own citizens.”

On Friday, the U.S. Mission to the United Nations released a statement on the pact, calling it an effort to “advance global governance at the expense of the sovereign right of States […] we cannot support a ‘Compact’ or process that imposes or has the potential to impose international guidelines, standards, expectations, or commitments that might constrain our ability to make decisions in the best interests of our nation and citizens.”

“Calls in the Compact to prevent all instances of intolerance against foreign nationals or to promote certain perspectives for media professionals in how they report on or characterize migrants raise concerns about respect for freedom of opinion and expression and media freedom, core tenets upon which the United States was founded,” it said. “We are also concerned that this language in the Compact could be abused by repressive regimes that seek to limit speech unduly.”