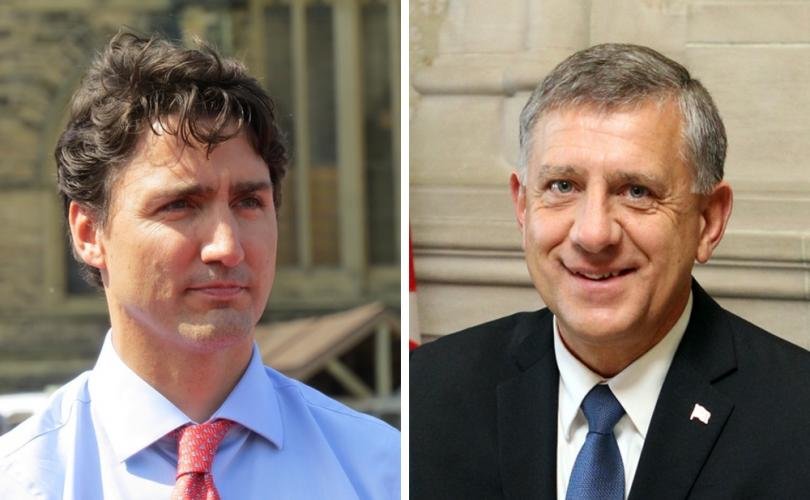 OTTAWA, May 11, 2018 (LifeSiteNews) – A pro-life Conservative Member of Parliament touched off a ruckus in the House of Commons Wednesday when he shouted out that abortion “is not a right!”

And MP Ted Falk is not only getting slammed by Liberals and NDP, but he’s reportedly been muzzled by Conservative leader Andrew Scheer in the wake of the controversy.

Falk heckled Prime Minister Justin Trudeau after Trudeau responded to an NDP question on rural access to abortion by declaring the Liberals “will always be unequivocal in standing up for a woman’s right to choose.”

The remark provoked immediate outbursts from NDP and Liberal MPs, such that House Speaker Geoff Regan had to call repeatedly for order.

“What we have just heard is awful,” was the response by NDP MP Anne Minh-Thu Quach, according to Hansard.

“This is a right, and everyone needs to understand that,” she added, to a sustained standing ovation from her colleagues and the Liberals.

Status of Women Minister Maryam Monsef demanded Falk be asked to withdraw his “offensive echo” that “women do not have the right to choose.”

“I am afraid that this is a question of debate, and we have opportunities to have debates on this subject,” answered the speaker.

Trudeau then addressed the matter, saying “We on this side of the House, along with the NDP, understand that women unequivocally have the right to decide what to do with their bodies, and we are always going to stand up for that right, regardless of what the Conservatives think or say.”

The Liberal Party immediately used the incident to fundraise.

It sent out an email declaring Falk was wrong, and claiming a woman’s “right to choose” abortion “is a right, one protected by the Charter of Rights and Freedoms.”

“Unfortunately, this is just the latest example of the Conservatives showing Canadians that they do not support women's rights,” the Liberal Party email noted.

Scheer “relied heavily on support from anti-choice organizations during his leadership campaign,” it went on.

But the Liberals claim that abortion is protected by the Charter is completely false, says Campaign Life Coalition vice president Jeff Gunnarson.

“Our president Jim Hughes sent Trudeau a letter in September asking him to stop telling the lie that abortion is a human right and protected by the Charter,” he told LifeSiteNews.

“And now the Liberal Party is capitalizing on the same lie to fundraise. It’s disgusting.”

“We support Ted for his courage, and thank him for standing up for unborn children,” Gunnarson said.

A source close to the Conservative Party told LifeSiteNews that when Falk’s clearly audible heckle landed in a lull in debate, Scheer “got that deer in the headlights look on his face.”

According to the source, Scheer subsequently designated another MP to “give [Falk] a talking to and he went home early that night” to his Provencher, Manitoba riding.

One Conservative MP told LifeSiteNews off the record he thought Scheer just wanted Falk out of reach of reporters for a few days.

LifeSiteNews contacted Scheer’s office but did not hear back by deadline. Nor has Falk responded to calls for comment.

“For the leader of the Conservative Party not to support an MP who told the truth is to be complicit in the lies that the Liberals are propagating, that abortion is a human right,” Gunnarson told LifeSiteNews.

“Abortion is not a right. It’s the killing of the unborn child. Period.”

“Outside the chamber, Conservative MPs said they didn’t hear what their colleague had shouted and refused to comment,” Huffington Post reported.

But French-language Montreal newspaper Le Devoir reported Scheer issued a statement that avoided the word “abortion” while reiterating his party won’t legislate on “this controversial issue.”

“As has always been the case, a Conservative government will respect previous court decisions on this subject,” wrote Scheer.

Le Devoir contended that many Conservative MPs were embarrassed by Falk’s comment because they are already portrayed as a party that is against abortion.

The Conservative Party is only one of Canada’s three major parties that does not officially endorse abortion as part of its platform.

It quoted Alain Rayes as saying: “What was said by the member, for me, is unacceptable inside the House of Commons,” and Gerard Deltell’s contention that: “This right existed, exists and will always exist.”

Campaign Life’s Hughes debunked this claim in his September letter to Trudeau, which can be read in full here.

“It is unbecoming for the Prime Minister of Canada today to deliberately utter a falsehood and to keep repeating it,” he wrote.

When Campaign Life lobbied hard for a right-to-life amendment to the Charter, then-Prime Minister Pierre Elliott Trudeau “assured us that the Charter would have no impact on the abortion question,” Hughes noted.

Abortion “has never been declared to be a ‘Charter right’ by the Supreme Court of Canada,” he added. “In fact, the Court has specifically held that there is a legitimate right for Parliament to legislate on the issue, should it so choose.”

Moreover, “for as long as the United Nations has existed, consensus has never been reached on the issue of abortion as a human right,” noted Hughes.