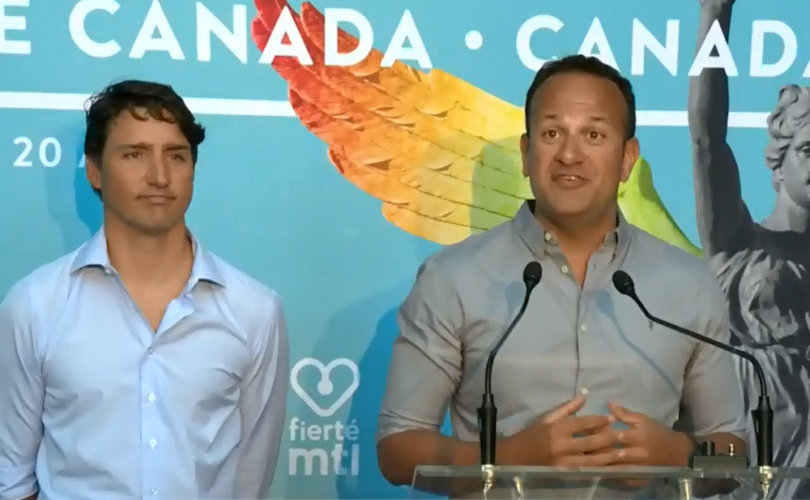 MONTREAL, August 22, 2017 (LifeSiteNews) — Canada’s Prime Minister has told the new leader of the Irish Republic that abortion should be a “human right” in his country.

Varadkar wants to give the Irish Republic the chance to remove the Eighth Amendment. At a press conference after their talks, Varadkar told reporters, “We discussed the issue of abortion, which I know is an important issue for a lot of campaigners for women’s rights in Canada.”

Varadkar is Ireland’s first openly gay taoiseach. During his time in Canada, he and Trudeau marched together during Montreal’s August 15 Gay Pride parade. Varadkar’s election as leader of the Fine Gael party and subsequent nomination as Taoiseach in June 2017 is held to be yet another sign that Irish social mores have changed radically in a short period of time.

Both Varadkar and his partner Matthew Barrett are medical doctors.

Trudeau’s advice to Varadkar is the most recent of a number of foreign interventions in the political matters in Ireland. An American foundation funded the Irish same-sex “marriage” campaign to the tune of one billion dollars. In June, the United Nations ordered Ireland to change its laws against abortion.

In a press release, Ireland’s Pro Life Campaign stated that if Ireland’s abortion laws were questioned during the Taoiseach’s Canadian visit, the “barbaric” abortion laws of Canada must also be discussed.

Pro Life Campaign spokesperson Dr. Ruth Cullen said, “I’m a little surprised that abortion campaigners are using the Taoiseach’s trip to Canada to try and drum up support for abortion in Ireland given Canada’s particularly grotesque abortion laws. Canada in effect provides no legal protection for unborn babies throughout the entire nine months of pregnancy.”

“Official Canadian figures show that over a 10-year period starting in 2000, 491 babies who survived botched abortions were abandoned by medical staff and left to die alone in the corners of hospitals,” she added. “These figures reveal the chilling and truly barbaric reality of legalized abortion.”

Cullen observed that Ireland’s pro-life laws are constantly attacked with little or no criticism or debate on what happens in other countries. Implied in the criticism of Ireland is that countries like Canada offer an example to the world when it comes to abortion legislation. An incredible 1 in 5 pregnancies in Canada end in abortion, and there is no legal protection for unborn babies, right up to birth.

“If an issue is going to be made of Ireland’s abortion laws in the coming days, then the inconvenient truth about Canada’s abortion law must also be front and center of any discussion,” Cullen said.