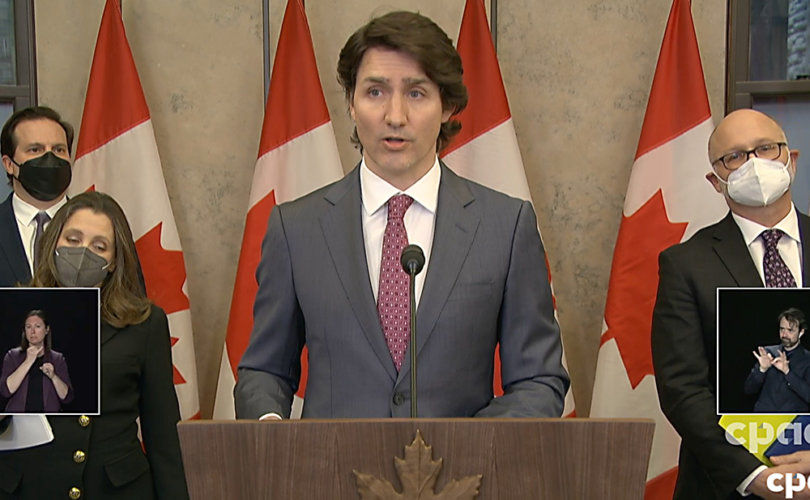 “I did not call people who are unvaccinated names,” said Trudeau in response to a question from Freedom Convoy lawyer Eva Chipiuk.

Trudeau DENIES labeling the unvaccinated as racists and misogynists, while talking over and bullying the woman asking him fair questions. https://t.co/ZIhxxlabc6 pic.twitter.com/c1I6lZznUb

Chipiuk, pressing Trudeau on the issue, made reference to the now “widely published comments” he made last year “calling the unvaccinated racist and misogynist.”

“And we have heard testimony in this inquiry about how some of your officials wanted to label protesters as terrorists. Would you agree with me that one of the most important roles of a prime minister is to unite Canadians and not divide them by engaging in name-calling?” asked Chipiuk.

Trudeau responded by saying “I highlighted, there is a difference between people who are hesitant to get vaccinated for any range of reasons and people who deliberately spread misinformation that puts at risk the life and health of their fellow Canadians.”

Trudeau’s testimony seems to contradict at least two statements he made on video about unvaccinated Canadians.

In 2021, Trudeau said Canadians “vehemently opposed to vaccination” do “not believe in science,” are “often misogynists, often racists,” and even questioned whether Canada should continue to “tolerate these people.”

During the Freedom Convoy protests, before he enacted the Emergencies Act (EA), Trudeau once again disparaged unvaccinated Canadians, saying those opposing his measures were of a “small, fringe minority” who hold “unacceptable views,” and do not “represent the views of Canadians who have been there for each other.”

Later in today’s testimony, Trudeau went as far as saying he wishes he would have done “more” to get people to take the COVID shots, despite having implemented some of the strictest COVID-related mandates for travel in the world.

Trudeau also doubled down on his invocation of the never-before-used EA to crush the protest movement, saying he was “serene and confident” in his decision.

Moreover, according to two recent medical studies from Europe, vaccine-induced blood damage likely explains the many harmful impacts of the experimental COVID shots.

With today being the last day of the public hearings into Trudeau’s use of the EA, starting next week the Public Order Emergency Commission will begin a public policy phase to recommend potential amendments to existing legislation related to the Freedom Convoy, a process that includes round-tables of “experts.”