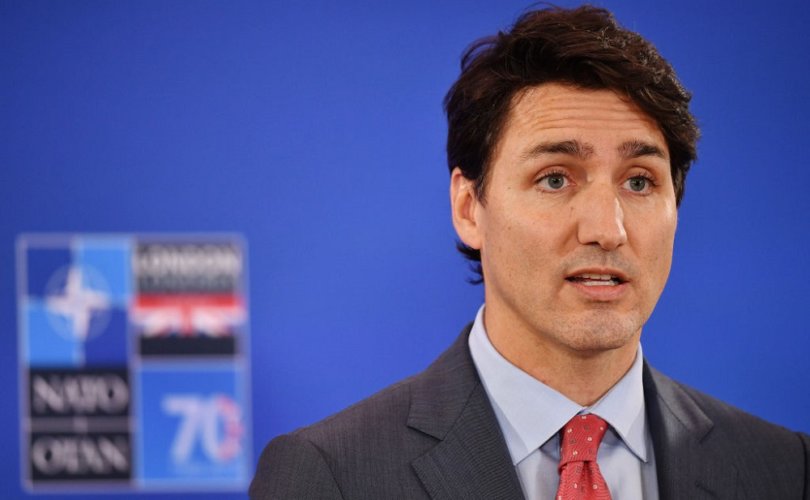 OTTAWA, May 26, 2020 (LifeSiteNews) — Canadian Prime Minister Justin Trudeau says the federal government will fund provincial efforts to ramp up COVID-19 testing, the tracking of contacts of individuals who test positive, and the sharing of these data across the country.

Testing, contact tracing, and data-sharing are all essential to reopening the economy and allowing Canadians to travel across the country, Trudeau said in his daily briefing last Friday.

“In order for people to move around freely and start getting back to normal life, we have to improve our ability to quickly pinpoint the virus and isolate it,” he said.

“I’ve told the premiers that the federal government is here to support, facilitate and fund this important work.”

“Contact tracing” refers to the practice of government officials tracking individuals who have been in contact with those who test positive for COVID-19 in order to make sure they too are tested and isolated.

“We need to get in touch with everyone who may have been exposed to the virus to make sure they quarantine and monitor themselves for symptoms or get tested,” Trudeau said.

The federal government has public servants who can make up to 3,600 phone calls a day, seven days a week, to track contacts. Statistics Canada has also provided 1,700 interviewers who can make 20,000 contact tracing calls per day, he said.

“These federal resources are available to assist provinces and territories with any surges, or backlogs or challenges they have in contact tracing,” he added.

Contact tracing depends on people getting tested for the virus, and Trudeau urged provinces to ramp up on that as well.

“We need to continue scaling up our testing capacity so we can quickly identify new cases and isolate them. We’re working with provinces and territories to expand testing by procuring things like reagents and swabs.”

The federal government has also been “reaching out over the past week to all provinces to determine what their plan is on contact tracing, what exactly they are doing and whether or not they need more help,” said Trudeau.

“We certainly hope to hear back from the provinces that could need this quickly, to tell us whether and how they want us to help. A number of provinces have, some have not yet,” he said.

“We’re already helping to make calls in Ontario and stand ready to help anywhere else.”

The Liberals will be “strongly recommending” one particular contact tracing smartphone app for national use, Trudeau said in response to a reporter’s questions. Apple and Google collaborated in developing smartphone technology that automatically notifies people that they may have been exposed to the coronavirus, CBC reported.

The software, released last week, uses Bluetooth wireless technology to detect when someone who downloaded a tracing app has spent time near another app user who later tested positive for the virus.

Countries can use the software to develop their own contact tracing apps. A Swiss team announced this week that it was the first to launch a coronavirus contact tracing app incorporating the Apple and Google technology, the BBC reported.

“Around the world there have been a number of different apps developed, Singapore, Australia, other places. One of the challenges that those apps have encountered is that it has to sit in the foreground of your phone and drains the battery,” Trudeau said Friday.

“That’s why the fix that Apple and Google are talking about bringing in in the beginning of June will be extremely important as a base for an effective contact tracing or exposure notification app.”

Ontario premier Doug Ford said Friday that his province is looking for an app suitable to its needs and that respects privacy, but that Ontario will join in a nationwide smartphone app program, CTV News reported.

“When we fully reopen the economy and people are flying, let’s say from Vancouver to Toronto to Calgary … those apps have to be able to talk to each other,” he said.

Dr. Howard Njoo, Canada’s deputy chief public health officer, commented that apps are not a “silver bullet” and might not necessarily detect infection accurately and that telephoning should remain an key part of Canada’s contact tracing strategy, reported CBC.

Critics have warned since the outset of the pandemic that governments could use the COVID-19 crisis to justify violating citizens’ fundamental freedoms and usher in a surveillance state.

Alberta was the first Canadian province to launch a contact tracing app that people download voluntarily, and Jay Cameron, a lawyer for the Alberta-based Justice Centre for Constitutional Freedoms (JCCF), told LifeSiteNews at the time that the legal group is keeping an eye on government-issued contact tracing apps.

“Monitoring someone’s whereabouts using their cell phones is, of course, a search,” he noted.

Carol Brown of the American Thinker pointed out the dangers of contact tracing plans, which have been introduced in Michigan, Washington, and Massachusetts.

“Under the guise of concern for public health, contact tracing allows the left to continue their totalitarian advance, as the federal government leaves it up to states to develop these intrusive measures,” she wrote.

“Opening up the economy won’t solve this deeper problem of fascists on the move infiltrating every aspect of our lives.”