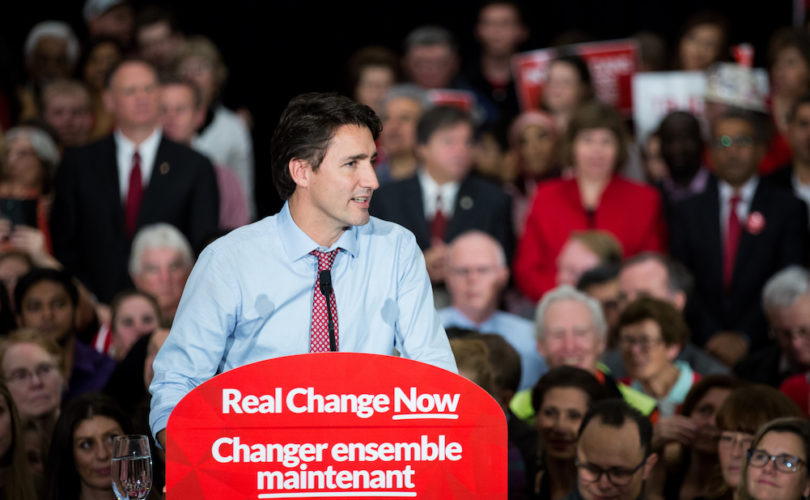 OTTAWA, February 12, 2016 (LifeSiteNews) — Prime Minister Justin Trudeau has already made Liberal party MPs pledge that they will vote in favor of abortion, and now, on the other end of life, he plans to whip the vote in favor of a forthcoming law that allows doctors to kill their patients.

Liberal House Leader Dominic LeBlanc told the Globe and Mail yesterday that Liberal MPs will be forced to vote the pro-assisted-suicide party line.

“At the end of the day, the Supreme Court has defined a right around the issue of assisted dying, and we will be always voting to uphold Charter rights,” he said.

But not all Liberal MPs like the idea of being forced to vote on legislation that is considered by many to be a conscience issue.

“It’s not core to the government’s mandate; it’s a response to the Supreme Court,” said Liberal MP John McKay (Scarborough – Guildwood, ON). “I don’t see this as a Charter issue.”

It was last February when the Supreme Court made what critics called an “activist decision” to give doctors the right in law to cause the death of patients by euthanasia and assisted suicide. The court originally gave Parliament one year to come up with a law to govern the practice, which was extended by four months until June, due to insufficient time because of the federal election cycle.

The Supreme Court decision allowed euthanasia for “a competent adult person who (1) clearly consents to the termination of life and (2) has a grievous and irremediable medical condition (including an illness, disease or disability) that causes enduring suffering that is intolerable to the individual in the circumstances of his or her condition.”

Alex Schadenberg of the Euthanasia Prevention Coalition told LifeSiteNews that he fears the forthcoming Liberal legislation will go further than the Supreme Court in expanding the categories of who is eligible for death.

“With the configuration of the Committee [on Physician-Assisted Dying] which heard expert testimony, that same Committee refused to hear from the Euthanasia Prevention Coalition, or from any physicians against euthanasia, or any groups which have a problem with euthanasia. That told me right off the bat where they were coming from.”

For example, the committee heard constitutional law scholar Peter Hogg argue that the federal government cannot restrict physician-assisted suicide to the terminally ill, because to do so would open the government to a court challenge.

The committee also heard Dr. Jennifer Gibson, a member of the provincial-territorial panel, argue that consent should be based on competence, not age. “There is an increasing recognition, particularly in pediatric settings, where some children, especially adolescents, have the competence and the capacity to make an end-of-life decision,” she said.

Schadenberg said that if the legislation produced looks anything like the expert testimony provided, then it will be a “fairly extreme bill” and will likely go beyond what the Supreme Court established as criteria for who is eligible for death.

“This Supreme Court said assisted suicide would be for adults who clearly consent. And yet, we have a member of the provincial-territorial panel telling the committee that assisted suicide should be available for children. I’m thinking that the Federal bill will include children,” he said.

Schadenberg said that he expects the bill to be so “extreme” that even “supposedly moderate MPs within the Liberal party will be uncomfortable with it. And that is why Trudeau will have to whip the vote.”

“It appears that Trudeau is only interested in one direction. He's not interested in finding a real consensus, because if he was, he would not be planning on whipping the vote,” he said.