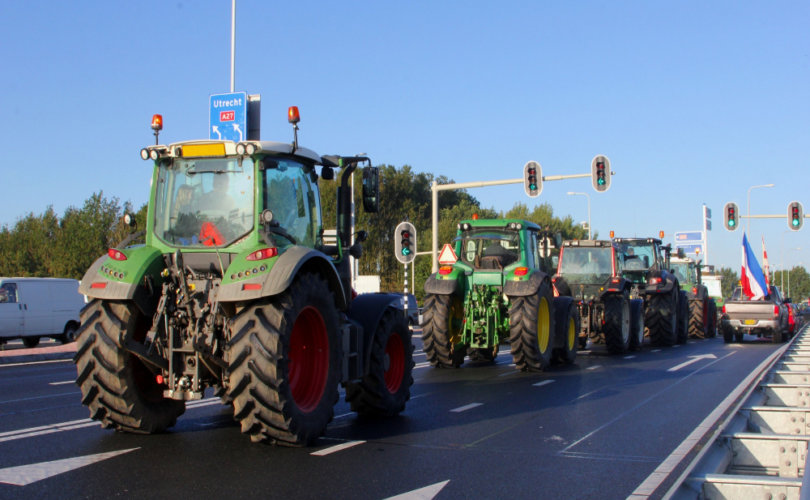 Dutch farmers protest against the government.Shutterstock

While farmers in the Netherlands continue to protest their government’s plan to impose industry-destroying fertilizer emissions policies, a December 2020 press release from Canada’s Minister of Agriculture and Agri-Food shows that, like Dutch Prime Minister Mark Rutte, Trudeau also plans to clamp down on the use of nitrogen fertilizer in the name of “climate action.”

“Fertilizers play a major role in the agriculture sector’s success and have contributed to record harvests in the last decade. They have helped drive increases in Canadian crop yields, grain sales, and exports,” the release states.

“However, nitrous oxide emissions, particularly those associated with synthetic nitrogen fertilizer use have also grown significantly. That is why the Government of Canada has set the national fertilizer emissions reduction target, which is part of the commitment to reduce total GHG emissions in Canada by 40-45% by 2030, as outlined in Canada’s Strengthened Climate Plan, and enshrined in legislation through the Canadian Net-Zero Emissions Accountability Act,” the government added.

In Canada’s “Strengthened Climate Plan,” the Trudeau government refers to the country as a “willing and active partner on the international stage,” and mentions how Canada adopted in 2015 the United Nations’ “2030 Agenda for Sustainable Development.”

“The Government of Canada is working with its partners to advance the 2030 Agenda at home and abroad through concrete actions on the 17 Sustainable Development Goals, which include reduced inequalities, sustainable cities and communities, responsible consumption and production, and climate action,” explained Trudeau’s government, referring to the 2030 Agenda as a “global call to action to end poverty, protect the planet and ensure that all people enjoy peace and prosperity by 2030.”

The Plan also makes mention of the annual World Circular Economy Forum (WCEF), which was hosted online by Canada in 2021 with the goal of bringing “together global leaders and experts to drive ambitious action over the next five years to accelerate the transition to a prosperous, inclusive and equitable circular economy.”

Included in the list of speakers at the 2021 WCEF event was Dutch Minister for the Environment Steven van Weyenberg.

The WCEF and the UN seem to be focusing on goals similar to those outlined in the World Economic Forum’s “Great Reset” agenda, which states that by the year 2030 “you’ll own nothing and you’ll be happy.”

Both Trudeau and Rutte are listed on the WEF’s website, with Rutte being labeled an “Agenda Contributor.”

As reported by LifeSiteNews, in recent weeks thousands of Dutch farmers have taken to the streets to protest their government’s desire to cut nitrogen emissions in half by 2030, something the farmers say will devastate the industry and force many off the land their families have farmed for generations.

People have begun to draw parallels between the Dutch farmers protesting Rutte and the Canadian truckers who protested Trudeau earlier this year, as both movements have involved from an uprising of the working class against governmental policies that many assume are part of the “Great Reset” and other globalist agendas.

Much like past footage from the Canadian truckers’ “Freedom Convoy,” footage from last week shows hundreds of tractors and trucks clogging Dutch highways in protest of the so-called climate change policies, with more footage showing farmers taking to the streets to protest on foot.