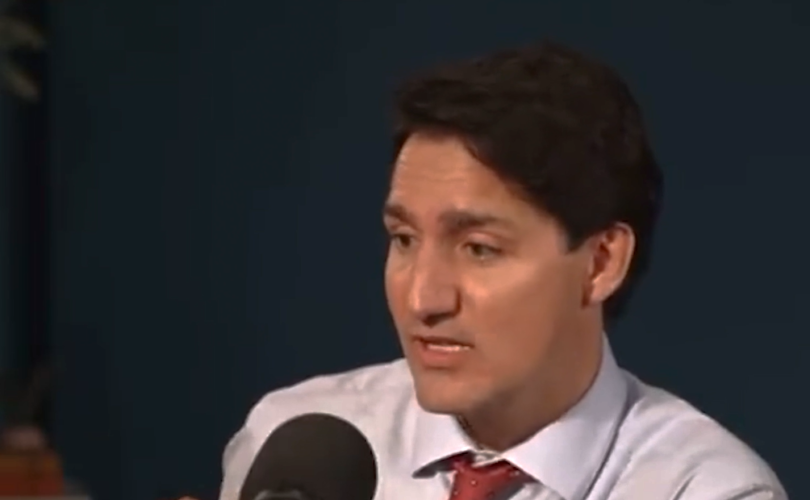 Justin Trudeau discusses guns on the Los Angeles-based 'Pod Save the World Podcast.'Rumble

(LifeSiteNews) – The viral “#TrudeauMustGo” hashtag is now the number one trending political topic on Twitter and shows no signs of stopping after hitting just over 2 million shares.

Depending on the web browser, Twitter is currently showing the #TrudeauMustGo hashtag as having just only 200,000 tweets. However, earlier in the week, the social media company was showing the same hashtag with close to 600,000 shares.

For a time, Twitter stopped showing the number of impressions, so it is not clear what’s happening with the official numbers.

However, Roman Baber, a Conservative Party of Canada (CPC) leadership candidate, wasted no time in calling out Twitter for appearing to suppress the #TrudeauMustGo trend.

“Hold on @TwitterCanada. #TrudeauMustGo exceeded half a million and was removed from the trending list. @Twittermust decide. Are you with the Regime? Or will your algorithm respect Freedom of Speech? You too @Meta, what are you going do? #cdnpoli #onpoli,” tweeted Baber.

According to the man who appears to have started the #TrudeauMustGo trend, Albertan Marty Belanger, there are now about 2 million tweets, according to data taken from the website TweetBinder, which shows analytics.

The #TrudeauMustGo trend has steadily inched upward since September 13, according to the data, with thousands taking to social media to demand that Prime Minister Justin Trudeau resign for the way he called opponents of the COVID jab mandates “extremists.”

The hashtag has many variations such as #TrudeauHasToGo, #TrudeauHasGotToGo, and #TrudeauResign having many shares as well. The Twitter trend began to pick up steam early last week.

Those using the hashtag have generally made it a point to post their picture with relevant text stating why they oppose Trudeau.

“I’m a 36 year old unvaccinated mother of 4. I pulled my children out of school because of Trudeau and his ridiculous mandates that have affected millions of Canadians. According to Justin Trudeau, I am a racist extremist with unacceptable views. #TrudeauMustGo,” reads an example of a tweet from user Jolene Funk.

Tim Goyetche, a naturopath, pointed out COVID jab injuries he has witnessed.

“I am a 56-year-old Naturopath with 30 years of clinical experience. Since the rollout of the vaccines, I’ve had to treat 47 people with vaccine-induced myocarditis. Many are teenagers. Unacceptable views from Shediac, NB! #TrudeauMustGo #TrudeauHasGotToGo #TrudeauMustResign,” tweeted Goyetche.

Trudeau said last year that Canadians who have chosen to not get the experimental COVID-19 jabs are “extremists,” “racists,” and “misogynists” who deny science.

He then put in place in late 2021 a mandate that banned the vaccine free from traveling within and out of the country by air, rail, or sea.

While the travel ban on the vaccine free was “suspended” June 20, court battles against Trudeau’s draconian mandates have forged ahead.

It is anticipated the Trudeau government will make the much-maligned ArriveCAN app optional at the end of the month and scrap a vaccine mandate for travel into Canada for non-citizens.

Since picking up steam last week, the #TrudeauMustGo trend has not had much, if any, engagement from Conservative Party of Canada (CPC) MPs under its new leader Pierre Poilievre.

A search on Twitter shows that CPC MP Dr. Leslyn Lewis, who came in third place in the leadership race, has not tweeted a word regarding the #TrudeauMustGo trend.

Lewis ran a campaign that consistently called of COVID mandates.

CPC MP Melissa Lantsman, who was just made the party’s deputy leader and for the past few months was vocal in calling out Trudeau’s travel COVID mandates, has been silent thus far as well.

On September 10, the CPC elected Poilievre, who serves as an MP in Ottawa-Carlton, to lead the party after he took home 68 percent of the vote on the first ballot. Lewis came in third with 9.7 percent, behind Jean Charest at 16.07 percent.

Poilievre ran on a platform saying he would remove “gatekeepers” and work hard to target inflation. He also said he would go after the influence the Word Economic Forum (WEF) has on MPs.

It is possible the new leader could be muzzling his MPs from speaking out on social media, as is common once a party elects a new leader.

In Canada, the Trudeau government shows no signs of stopping when it comes to promoting the COVID shots.

However, a recent LifeSiteNews report highlights how data from Canada’s National Advisory Committee shows expectant Canadian mothers are far more likely to shun the experimental COVID injections, which have been linked to an increase in miscarriages.