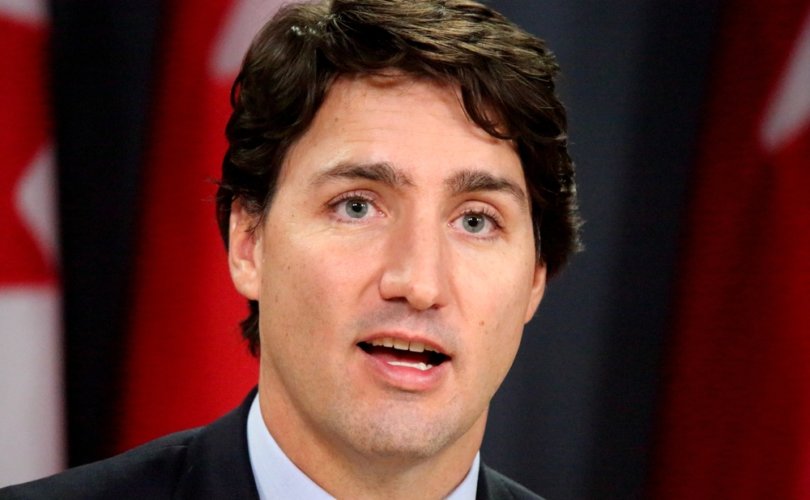 Trudeau's behavior in pushing Bill C-14 'gives credence to his harshest critics that he is an autocrat,' says one analyst.

OTTAWA, May 20, 2016 (LifeSiteNews) — By now it is established that on Wednesday night, Canadian Prime Minister Justin Trudeau strode across the floor of the House of Commons, pushed through a group of NDP MPs, grabbed the arm of Conservative Whip Gordon Brown and pulled him forward, meanwhile elbowing NDP MP Ruth Ellen Brosseau in the chest, so unsettling her, she later told the House, that she left the chamber and missed the subsequent vote. Trudeau allegedly told the group of NDP MPs to “Get the f—k out of the way.”

And all of this was in an effort to move along a vote to strip the Opposition of its powers in opposing his government’s controversial euthanasia legislation.

Trudeau has since apologized at least three times. But given his past behavior, his angry antics, while admittedly shocking to behold, should come as no surprise, being as they are consistent with his political attitude.

After all, this is a man who has stated admiration for Communist China’s way of doing business, noting casually in 2013 that China’s “basic dictatorship is allowing them to actually turn their economy around on a dime”; who unilaterally decreed that Liberal MPs and candidates must keep any pro-life convictions to themselves in order to stay in his party; who threw his senators out of the Liberal caucus when he deemed them a political liability; and who has now ruthlessly suppressed debate on the most significant moral question of the day, the legalization of euthanasia.

Or as Paul Tuns, author of The Dauphin: The Truth about Justin Trudeau, put it in an email to LifeSiteNews: “In both his desire to squelch debate in the House of Commons and his violent outburst on the Commons floor,” Trudeau “gives credence to his harshest critics that he is an autocrat.”

If former Conservative PM “Stephen Harper had ever physically bullied MPs like Justin Trudeau, there would be immediate & widespread demands for his resignation,” added Kenney.

“I guess this is what the Liberals get for choosing a former bar bouncer as their Leader,” he quipped.

Trudeau’s behaviour has even sparked stinging rebukes among some most likely to bask in his “sunny ways.” In its editorial Thursday, Globe and Mail wrote, “The PM’s temper tantrum – what else can we call it? – left the Speaker, Liberal Geoff Regan, pathetically having to remind the House that ‘it is not appropriate to manhandle other members.’ Has a speaker ever had to say that? To a prime minister?”

His roundly condemned conduct naturally appears to have been, in some ways, an unexpected gift for the opposition.

In the wake of a protracted privilege debate on the episode, Liberal House Leader Dominic LeBlanc announced during Thursday’s question period that he was withdrawing the controversial Motion 6 he had introduced late Tuesday night.

The opposition had fiercely decried the now-defunct motion as draconian and undemocratic, saying it would strip them of all the tools of opposition.

But while Motion 6 is gone, for now, at the same time, as Jason Kenney noted, we can’t forget that it was focused specifically on passing one of the most controversial pieces of legislation in recent memory.

“Lost in the mix: MP Trudeau’s outburst was to speed-up closure vote in the euthanasia bill, unprecedented for an end of life conscience issue,” Kenney tweeted.

“This whole brouhaha is all about getting C-14 passed as swiftly as possible,” echoed Tuns.

Indeed, it was the motion to close debate on Bill C-14 that Trudeau claimed he was trying to expedite when he pushed his way through the group of NDP MPs, who, he said, were “impeding” Brown’s progress.

Ironically, Trudeau’s misbehavior delayed debate on the bill, with third reading vote now scheduled for May 30.

After Speaker Regan found the prime minister guilty of breach of privilege, Tory MP Peter Van Loan moved that the matter of the “physical molestation of the member of Berthier-Maskinonge” be referred to the procedure committee.

And because questions of privilege trump other business, the opposition took full advantage while debating the motion to vent disapproval of Trudeau’s actions, and anger at the Liberals’ clampdown on debates.

Typical of the comments were those of Tory MP Cathy McLeod, who pointed out that MPs expected to debate Bill C-14 on Monday, but the Liberals instead put forward other bills, and “failed to even provide a parliamentary calendar…that has never been done in the whole time I have been here.”

Tory MP Bev Shipley, who also criticized the Liberals for pushing through legislation, likened Trudeau to an “angry, spoilt adolescent that didn’t get his way.”

Added Shipley: “We’ve got a dictator that almost says we’re going to tell you what you’re going to speak on…Folks, that’s not democracy.”

While the media had focused on Trudeau’s behavior, Charles Lewis, a journalist and anti-euthanasia activist noted that the “real issue is, why are they limiting debate on what everyone can agree is a bill that will greatly change our culture?”

“This is not some esoteric subject, but about doctors killing patients,” he emphasized. “What is going on with us?”

Campaign Life Coalition vice president Jeff Gunnarson noted that Trudeau earlier stated that legalizing euthanasia is such a significant step that the government needed to listen to all Canadians, but now Liberals have shut down debate.

“On an issue such as this, there is tremendous capacity for mature, reflective debate, engaging with the issues in substantive and sensitive ways,” Trudeau said in early April. “I’m very optimistic that we’re going to be able to meet the deadline imposed by the Supreme Court while having a fulsome, responsible debate that involves the voices that need to be heard on this issue.”

Critics have noted Trudeau’s dictatorial tendencies as an indication of how he would run a government, when in a position to do so.

Those tendencies took form in Trudeau’s May 2014 edict as Liberal leader that any candidates in the Liberal Party must toe the line and support abortion.

“I have made it clear that future candidates need to be completely understanding that they will be expected to vote pro-choice on any bills,” he said at the time.

Trudeau reiterated his edict in March 2015, noting: “For Liberals, the right of a woman to control her body is more important than the right of a legislator to restrict her freedom with their vote. MPs who disagree with that have other choices. They can sit as independents, or as Conservatives.”

Earlier, in January 2014, he turfed Liberal senators out of his caucus in an unilateral decision that stunned not only senators and their staff, whom he told about his decision minutes mere minutes before a caucus meeting, but which “blindsided veteran insiders and political observers who had no inkling about the change,” noted the CBC at the time.