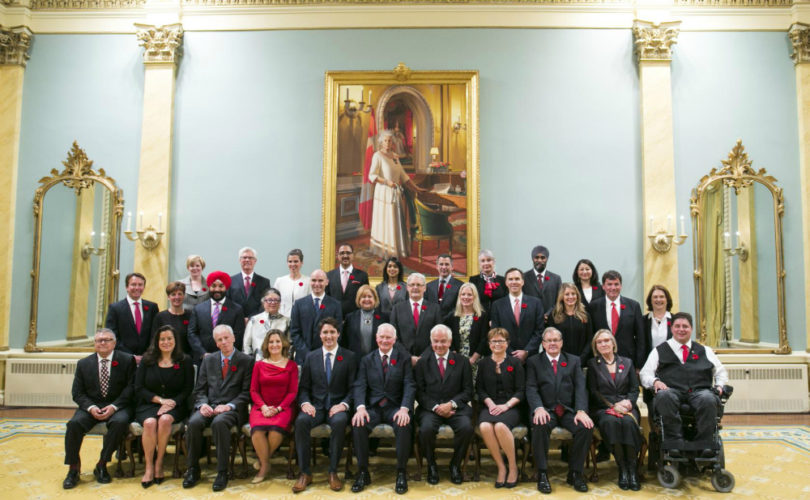 With sunny skies over the nation’s capital – evoking Trudeau’s election night victory speech nod to Wilfred Laurier, “Sunny ways, my friends, sunny ways” – a festive mood reigned among the hundreds of people who congregated outside Rideau Hall to welcome the Liberals and watch events on a big screen TV set up outdoors. Pro-life advocates, however, had little to cheer about.

For despite the Trudeau cabinet’s much vaunted diversity —  as the Huffington Post noted, it contains  “two aboriginal ministers, two disabled ministers, one openly gay minister, a refugee from Afghanistan and four Sikhs” — its members all share the same view on one fundamental issue: they are uniformly pro-abortion.

Since Trudeau’s May 2014 edict barring pro-life candidates from the party, Campaign Life Coalition has rated all Liberals as unsupportable. However, CLC retains the voting records of incumbent Liberals (see below for links), ten of whom have been appointed to cabinet.

That includes PEI MP Lawrence MacAulay as agriculture minister. A Catholic with a fairly consistent pro-life voting record, MacAuley disappointed pro-life advocates when he stated he would abide by Trudeau’s edict.

Trudeau’s cabinet is evenly divided by sex, and he also chose 18 first-time MPs, some of these for senior portfolios.

Ontario’s Jane Philpott, a family doctor and mother of four is health minister; Bay Street millionaire businessman and former chair of the C.D. Howe Institute Bill Morneau has finance; BC MP Harjit Sajjan, a Lt.-Colonel in the Canadian Armed Forces and combat veteran who was deployed three times to Afghanistan and once to Bosnia, is minister of defence; BC MP Jody Wilson-Raybould, a former Crown prosecutor and First Nations elected chief, is attorney-general; and Manitoba’s MaryAnn Mihychuk, formerly a provincial NDP cabinet minister, is employment minister.

Although little is known of Health Minister Philpott, she has stated that euthanasia is a “nuanced” matter, telling the Huffington Post in May 2014 that: “I think something like euthanasia needs a whole lot more discussion before we would be actually looking at anything.”

Another rookie MP and veteran affairs minister, Calgary’s Kent Hehr, a quadriplegic since he was shot in a random drive-by shooting in his 20s, was a provincial MLA from 2008 to 2015, and sponsored a 2014 private member’s bill for gay-straight alliances in public schools.

All ministers from Atlantic Canada are incumbents, and returning MPs assigned major portfolios include: former Liberal leader Stephane Dion at foreign affairs; Nova Scotia’s openly gay Scott Brison as president of the treasury board; and Ontario’s John McCallum as minister of immigration.

BC cartoonist and pundit J.J. McCullough tweeted following the swearing-in ceremonies that: “Notable ministers who took oath without holy book or saying ‘so help me God’: Dion, Brison, Wilson-Raybould, and Joly — the heritage minister.”

At least one other, Quebec’s Jean-Yves Duclos, an economics professor at Laval and now minister of families, children and social development, is identified on Wikipedia as an atheist.