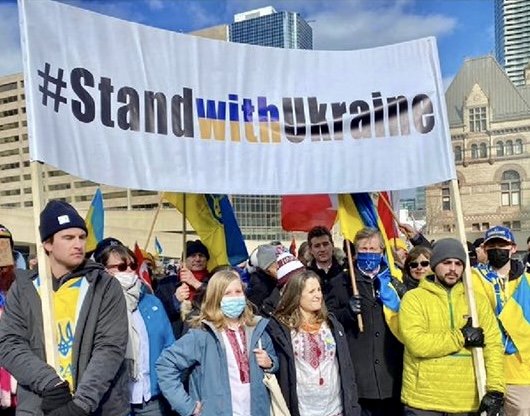 TORONTO (LifeSiteNews) —  Justin Trudeau’s Deputy Prime Minister was photographed Sunday helping to hold the banner of a Ukrainian nationalist army that collaborated with the Nazis and violently massacred tens of thousands of Poles as part of an ethnic cleansing program.

On Monday morning, Chrystia Freeland, the Ukrainian-descended Deputy Prime Minister and Minister of Finance of Canada, tweeted a picture of herself at Sunday’s “Mega March for Ukraine” in Toronto helping to hold a banner reading “Glory to Ukraine” in the red and black battle flag colors of the Ukrainian Insurgent Army (UPA).

Later that morning, she retweeted the same message but swapped out the photo of herself holding the UPA banner with one taken with the same people, but this time without the UPA banner. She has not issued an explanation for the photo swap.

Sanitized for your enjoyment pic.twitter.com/CAaAMaoXdq

The UPA was a Ukrainian paramilitary group active during World War II, which was founded by the Organization of Ukrainian nationalists (OUA). The UPA army was politically led by the extremist faction of the OUA, in turn led by Stepan Bandera, who is hailed in some parts of the Ukraine as a hero but in other parts is more widely considered a terrorist.

Under Bandera, the UPA carried out massacres of Poles from 1943 to 1945, in line with the OUN’s goal of establishing a Nazi Germany-allied, mono-ethnic Ukrainian state on territory including parts of modern-day Russia, Poland, and Belarus.

Ivan Katchanovski, a visiting scholar to Harvard University, explained, “The UPA, immediately after its creation in spring 1943, conducted a campaign of mass terror against the Polish minority in Volhynia with an aim of ethnic cleansing.” Most of the victims were women and children, according to Timothy Snyder, writing for the New York Review.

Katchanovski has noted that “both the OUN and the UPA were terrorist organizations because their actions correspond to academic definitions of terrorism,” which include the use of “violence against civilians to induce terror and achieve its political goals.”

The violence of the OUN and UPA also extended to collaboration in the Nazi-led genocide, as “Historical studies show that many representatives of the OUN and a significant proportion of the UPA members were involved” in the genocide, Katchanovski continued.

Bandera’s role as head of the UPA and of the extremist faction of the OUN was even condemned in 2010 by the European Parliament when outgoing Ukraine President Viktor Yushchenko awarded Bandera the posthumous title of Hero of Ukraine. The European Parliament declared that they “deeply deplor[ed]” the decision, since the OUN “collaborated with Nazi Germany.”

Some are questioning why Freeland would pose for a photo helping to hold a UPA flag, considering her background, history as a journalist, and knowledge of Ukrainian affairs, which was formed at least in part by a visit to the Soviet Union to study Ukrainian, and by her Master’s degree in Slavonic studies.

Candice Malcolm asked, “Are we supposed to believe that Chrystia Freeland is ignorant to the historic Red & Black association with the nationalist paramilitary Bandera movement? Wouldn’t a savvy journalist and astute international player know not to take or post a photo with this scarf?”

For several years now, it has been known that Freeland intentionally misled the public about her maternal grandfather’s propaganda work for the Nazis.

Freeland is a member of the World Economic Forum’s Board of Trustees and is working on a biography of George Soros, who has discussed his peace of conscience regarding his accompaniment, while he was a teenager, of a protector in Nazi-occupied Hungary while he seized property from Jews.

The author maintains that significant numbers of the Ukrainian Insurgent Army (UPA) did in fact perpetrate mass murder of Poles, and collaborated in Nazi genocide. Beginning in 1943 and through to the end of the Second World War, UPA forces murdered at least about 35,000 Polish civilians in the region of Volhynia alone. Some estimates put Poles murdered by the UPA at at least 50,000. Historians believe the massacres stemmed in part from the OUN-B (Bandera’s faction)’s desire for a “pure” national state, and glorification of violence.

Freeland’s own uncle, historian John-Paul Himka, has said regarding a plan to honor UPA fighters, “This is really a problem area because they killed so many people, civilians.”

However, as is often the case in history, including and especially World War II, a given group’s alliances are not a straightforward, simple matter. This is why they are here described not as Nazis or neo-Nazis but as Nazi collaborators. Even less should the UPA be thought of as representing Ukraine as a whole. The UPA murdered Ukrainian civilians (such as pro-Soviet civilians or political opposition) in addition to Poles, Jews, Russians, and others.

It should be noted that Bandera was imprisoned by the Nazis despite his pledge to collaborate  with them after Germany invaded the Soviet Union. The Nazis turned on him as they turned on many other former allies. He was released before the end of the war.

OUN commanders and members were arrested by Nazis as well. The UPA also at times attacked Nazis who “harassed Ukrainian civilians. In fact, the movement fought a number of actions against the Germans throughout 1943, eventually killing as many as 3,000 enemy soldiers.”

However, scholar Katchanovski noted that even after these arrests, “The OUN continued to maintain substantial presence and informal control over many” auxiliary units of local police who “helped to implement the Nazi genocides of Jews, Ukrainians, Russians, Byelorussians, and Poles by assisting in mass executions” and other extermination policies.

Regarding the murder of Poles:

Not all UPA members were involved in the murder of Poles. Katchanovski writes that “Although…at least 10% of ethnic Poles in Volhynia [were] killed by the UPA, the Polish casualties comprised about 1% of the pre-war population of Poles on territories where the UPA was active and 0.2% of the entire ethnically Polish population in Ukraine and Poland.”

Should use of the UPA flag be criticized?

The question of whether we should condemn the use of a UPA flag comes down to what the UPA stood for. It is appears that the UPA and its leader Stepan Bandera both advocated and committed great violence against innocent civilians, and never denounced this violence.

Freeland’s uncle Himka said regarding the UPA’s killing of the Jews alone: “…it remains a large and inexpugnable stain on the record of the Ukrainian national insurgency.”