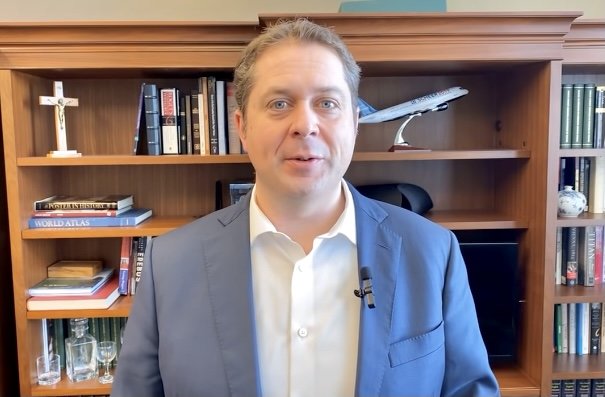 “The CBC (Canadian Broadcasting System) is doing their best to try to calm people’s fears that Trudeau might abuse his power. I’m not gonna buy it. I’m not gonna take it from him just on his word alone. You know, this is the exact same playbook that dictatorial governments in Eastern Europe used to use all the time,” said Scheer, who serves as an MP for Saskatchewan, in a video posted to his Facebook page last Friday that has been viewed 545,000 times.

“Everything they did to take away people’s freedom was always justified for things like public safety, and to keep order and to keep peace. Remember the Berlin Wall?”

said that the “excuse” for the Berlin Wall was to “keep foreign enemies out. It was never presented to the people of East Berlin that it was going to keep them trapped inside, the way the state dehumanizes and completely discredits anybody who stands up against the abuse of power.”

He then said, “It’s very, very eerily similar to what Justin Trudeau is doing today.”

In Scheer’s video, he blasted the CBC, Canada’s state-run broadcaster, as working “overtime” in trying to “discredit those protesting and to try to justify and cover for Trudeau’s use of the Emergency Measures Act.”

“The state broadcaster the CBC gets one point three billion dollars of tax money to operate their news division,” Scheer said.

“They even had one of their anchors, one of their on-air hosts speculate that maybe the Russians were behind this protest, saying that the word freedom was somehow linked to the far right that those who want personal freedom and individual liberty. Anybody advocating for that must be a member of a fringe group.”

Today, Trudeau announced that he was ending the EA, saying “the situation is no longer an emergency.

Trudeau took the unprecedented step of enacting the EA  on February 14, which he claimed was needed to deal with the truckers from the Freedom Convoy, who had been in Ottawa for the past three weeks protesting COVID mandates.

Trudeau’s new powers allowed the government to freeze anyone’s bank accounts associated with the convoy without a court order. Many who donated to the convoy had their accounts seized.

MPs from Canada’s House of Commons on Monday voted 185-151 in favor of maintaining the EA.

Last Friday, police in Ottawa, under the direct orders of Trudeau through the Emergencies Act, began clearing out Freedom Convoy protesters and arresting those who did not comply.

The vast majority of protesters on Parliament Hill in Ottawa were peaceful. However, during the clearout, at least one elderly lady was violently trampled by police.

Scheer also blasted Trudeau for shutting down parliament on Friday.

“Just a couple of days after Justin Trudeau embarked upon a massive power grab invoking the Emergency Measures Act for the first time in Canadian history giving him and his government unprecedented power, Parliament gets shut down,” Scheer said.

Last Thursday, two of the main convoy organizers, Tamara Lich and Chris Barber, were arrested by Ottawa Police. Lich has been denied bail.

Seven Canadian provinces had opposed the EA declaration made by Trudeau.

To contact your member of parliament, please visit this link:

To contact a senator, please visit the link below: