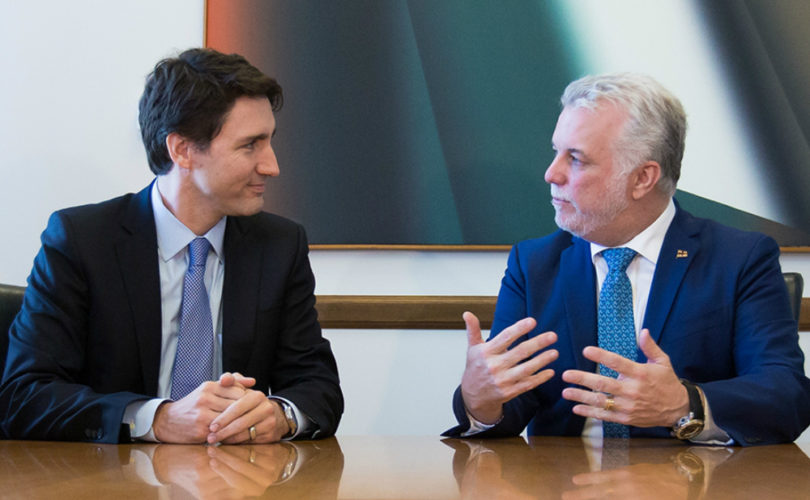 Robert Frater, counsel for the attorney general of Canada, made the statement while asking the Court Monday to give the federal government more time to craft a law governing assisted suicide.

The Court struck down the current federal law against assisted suicide as unconstitutional last February, but suspended its ruling for a year to allow the government to come up with legislation regulating the practice.

Frater told the Court that Quebec, meanwhile, has come up with a “comprehensive scheme” to regulate euthanasia.

According to Toronto Star reporter Tonya MacCharles, Frater surprised the Court when he said that Quebec’s doctors will be free to commit euthanasia as permitted by its provincial law, even though the Criminal Code remains in effect.

In response to a question from Justice Andromache Karakatsanis, Frater said: “Yes, the rule of law will mean that conduct is not a crime in Quebec,” MacCharles reported.

But “there is no surprise here,” says the executive director of the Euthanasia Prevention Coalition, Alex Schadenberg. “I could have told you this three weeks ago.”

Quebec’s Superior Court ruled December 4 that Bill 52, which was to come into effect December 10, violated the federal Criminal Code.

But on December 18, the Quebec Court of Appeal ruled the opposite, and declared that Bill 52 could come into force immediately.

And the federal government changed its position to accord with the Quebec court’s December 18 ruling, Schadenberg told LifeSiteNews.

He pointed to the December 11, 2015 meeting between Liberal Prime Minister Justin Trudeau and Quebec Premier Philippe Couillard, in which Trudeau praised Quebec’s Bill 52 and its approach to “assisted dying.”

“I have always congratulated Quebecers and the national assembly for its responsible and rigorous approach to such a delicate and sensitive topic for so many people,” Trudeau said in a press conference that day, reported the Huffington Post.

“In our submission to the Supreme Court for a six-month extension beyond Feb. 6, we are very open [to the idea] that the [court] consider the fact that Quebec has already established the kind of framework it asked the federal government and the provinces to establish,” Trudeau stated.

But in allowing Quebec to proceed unopposed with Bill 52, the federal government’s position in arguing for more time from the Supreme Court is “incompatible with itself,” Schadenberg said. “There’s a total inconsistency there.”

“Mr. Frater from the federal government is explaining that they need six more months, but that Quebec can go ahead with their law,” he said.

“But that doesn’t mean that the Quebec law is actually compatible with what the new federal law will look like sometime in the future. We don’t know if they’re going to be compatible or not.”

Bill 52 actually goes further than what the Supreme Court allowed in its February 6, 2015 ruling, Schadenberg said, in that it legalizes euthanasia, that is, it permits a doctor to administer a lethal injection to patients who suffer a terminal illness.

However, because Bill 52 restricts euthanasia to those suffering from a terminal illness, which, however, it does not define, noted Schadenberg, it is, in this sense, more restrictive than the Supreme Court ruling, which refers to “unbearable suffering” as grounds for assisted suicide, and does not specify terminal illness.

“The Supreme Court is quite clear we need a comprehensive scheme, and they preferred it would be a federal scheme, because then you have one scheme fitting all,” he said, adding that the Court “made it clear that the federal government had the right to legislate in this area.”